Home > Harvest mice making a comeback in the borough 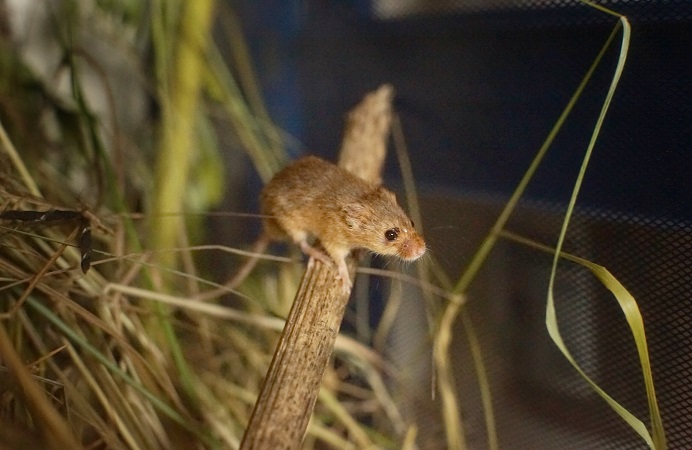 Harvest mice making a comeback in the borough

The Ealing Wildlife Group (EWG) has been working throughout the summer on an exciting project, one of the first of its kind to be launched in the capital, to bring a locally extinct species back to the borough.

Backed by the council, the project aims to reintroduce harvest mice, a tiny rodent species in significant national decline, to suitable habitats in the borough.

Dedicated volunteers of the EWG, spent time over the summer months running surveys to find the most suitable spots for the mice to be reintroduced, ahead of release. Now, the first group of mice have been released into the wild.

The harvest mouse is the smallest rodent in Europe, and often weighs around only 6g – less than a 50p piece. It lives in long, tussocky grassland, reed beds, hedgerows and around woodland edges.

Unfortunately, these miniature mammals have undergone rapid declines due to changes in land management nationwide.

Harvest mice have rounded hairy ears and golden-brown fur, and its tail is almost as long as its body. This is because it is also the only UK mammal to have a prehensile tail capable of gripping and holding on to grass, sticks and twigs.

The harvest mouse eats seeds and fruits, and sometimes invertebrates. It makes nests of tightly woven grass and are elevated from the ground in long grass and meadows.

The EWG has successfully crowdfunded the project and purchased hundreds of captive bred mice from one of the UK’s leading rewilding experts and set up small breeding colonies of their own. The first cohort of mice have now been set free into the wild and the plan is to release more into the wild over the next couple of years.

EWG founder Sean McCormack said: “Over the last few years, there has been an effort to manage some of Ealing’s green spaces more sympathetically for nature. What this has done has enabled several sites within the borough to now have habitats suited to the reintroduction of harvest mice.”

“The crowdfunding has been a success and now the rewilding programme will hopefully be in the position to help this species make a comeback locally.

“We are focussed on bringing nature back to urban areas and have spearheaded a number of other successful projects in the area including driving the increase in bird of prey species nesting in the borough.”

The £2,500 crowdfunding target was hit within days of being set up and anyone interested in the harvest mice reintroduction project can visit the EWG website for full details.

Plan for biodiversity launches this month

From September, the council an ambitious action plan (BAP) to safeguard the borough’s nature long into the future will be getting under way.

From creating wildflower meadows, to planting trees, building bird and bat boxes, the BAP sets out the ways we will protect and enhance our biodiversity.

The good news is that local people can play a vital role in achieving this greener and more environmentally friendly future.

Improving our biodiversity through expanding meadows, hedgerows and tree cover, is part of the ambitious but necessary target of achieving net zero carbon by 2030, part of the council’s climate action strategy.

By increasing these green spaces, we can also protect the habitats of flower and insect species vital to the pollination process and food chains.

Have a look at the first in a series of climate crisis explainer stories for further details about how the council is tackling this urgent issue, as well as more info about terms such as carbon neutral, net zero, and carbon footprint.

Councillor Deirdre Costigan, deputy leader and cabinet member for climate action said: “I’d like to thank everyone involved in the exciting EWG project to reintroduce the harvest mouse. It is ambitious and one of the first of its kind to be tried anywhere in London.

“Protecting and enhancing nature is vital as we look to build a greener and better borough for residents. Our Biodiversity Action Plan sets out how we will transform parks and green spaces, ensuring they serve both local people and nature in the long-term.”

Ealing Council’s new leadership has signalled a step change in the way the borough will tackle the growing climate crisis and it is a key priority. Enhancing, protecting and improving nature and biodiversity is a huge part of this revamped strategy.

Councillor Costigan continued: “Climate crisis is something none of us can ignore. By uniting as a borough we can begin to make positive steps needed to tackle this enormous challenge and continue to make Ealing a better place to live for our residents.”