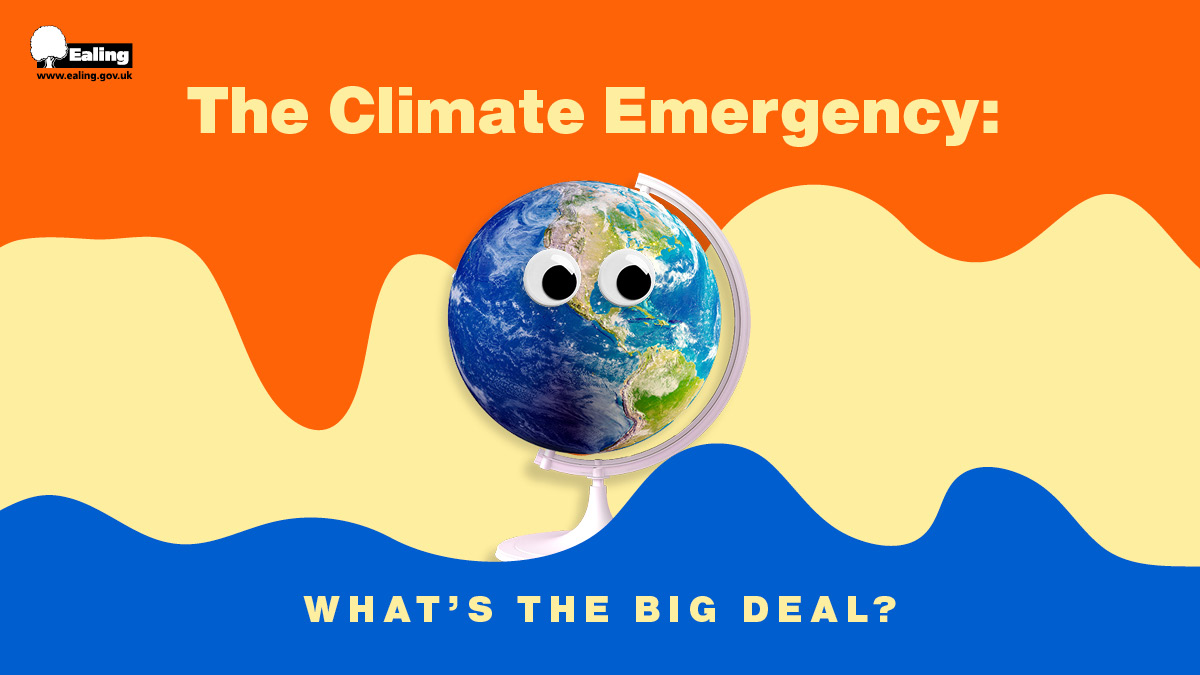 Climate crisis: A call to action

Climate crisis is an issue that is already seriously affecting the world we live in. Urgent global, national and local action is needed to avert rising temperatures, extreme weather and disastrous impacts on both people and nature – whether that is losing homes through flash flooding, ​the health crisis caused by air pollution or food shortages across the country caused by drought and ecological collapse.

​The impacts of the climate crisis will increasingly be felt right here in the borough of Ealing. ​However small steps taken by residents right here in Ealing can make a huge difference as we fight to avert this crisis, ​as well as helping us all live healthier lives, enjoy greener neighbourhoods and save money. ​

Ealing Council declared a climate emergency in 2019 to address this potential catastrophe. ​Now, the council’s new cabinet and leadership signalled a step change in the way the borough will tackle the growing crisis, ​naming climate action as one of its top three priorities for the borough.

​The new administration wants to make it easy for everyone to play their part – from ​how we get around, ​or heating our homes, to how we view and value nature and green spaces, ​and the way we buy food.

The council’s new leadership is pressing ahead with an ambitious climate strategy which aims to substantially reduce the borough’s carbon emissions and make it a greener, healthier place to live. This strategy sets out to contribute to our ​economic recovery​ from COVID-19 so that we can build a borough that delivers good jobs while also tackling the climate crisis.

We need to make small, but significant changes to the way we live our lives to achieve this and everyone can play a part. The council has identified four areas as part of its climate action strategy for this focus: transport, energy, nature and waste.

In the coming months we will be outlining how we ​will support residents to take practical steps in these areas to ensure success in tackling the climate crisis.

Why is climate action important?

Scientific research has been aware of changes to global temperatures for decades, but a critical point has been reached where urgent action is required to avoid irreversible change and damage to the planet – known as climate crisis, emergency, breakdown or catastrophe.

​A lack of action now will have dire consequences, here in Ealing and across the world. Extreme weather patterns could see record temperatures and droughts in the UK affecting daily life and everything from health to farming.

Food shortages caused by catastrophic events abroad could become a reality for people in this country, even in Ealing. Flash flooding and rising sea levels have the potential to wreck entire communities and leave people without homes and insurance.

Ecological collapse could see us permanently lose species vital to our ecosystems and iconic in our landscapes, history, and folklore. Air pollution caused by burning fossil fuels is already creating a health crisis and epidemic of respiratory illnesses in children.

To combat climate crisis, we need to drastically reduce the amount of harmful gases such as carbon dioxide and nitrogen dioxide we release into the atmosphere, products of burning fossil fuels such as oil and coal.

Our everyday actions use up energy create and these harmful gas emissions, which accelerates this harmful process.

Making changes such as reducing the number of shorter car journeys in favour of walking and cycling, creating more energy efficient homes and recycling more and better can help reduce emissions and reverse climate breakdown.

We are working collectively with our residents, communities, and businesses to achieve this goal.

Making Ealing carbon neutral by 2030 is central to the council’s climate action strategy and this is known as ‘net zero carbon’.

Achieving net zero means that as a borough, any carbon dioxide emissions generated from day-to-day living are being cancelled out and balanced by reductions in other areas. A bit like going for a jog to burn off the calories in a slice of cake that you ate the previous day.

Practically speaking, it means reducing the number of vehicles on local roads in favour of active travel, cutting energy used to heat our homes and increasing the amount of trees and green spaces which store carbon across the borough.

What is carbon footprint?

Carbon footprint is the amount of carbon dioxide released into the air specifically from your activities as an individual. Everything, from journeys made in your car, to heating your home, to the energy taken to get a delivery to your door can contribute to your carbon footprint.

Everyone can do more in different ways to reduce their carbon footprint by making small but significant choices to their lifestyle.

‘Climate crisis is something none of us can ignore’

Councillor Deirdre Costigan, deputy leader and cabinet member for climate action said: “We are more committed than ever to tackling the climate crisis and will work harder than ever to support residents to make the changes in their lives needed to achieve this.

“In the coming weeks we will be going into further detail about how we will work together with local communities to begin to take on this huge challenge in the areas outlined in our climate strategy – which are transport, energy, nature and waste.

“We are also consulting on a fifth area – food and how we source, grow, cook and dispose of our food how this impacts on climate.

“Climate crisis is something none of us can ignore. By uniting as a borough we can begin to make positive steps needed to tackle this enormous challenge and continue to make Ealing a better place to live for our residents.”