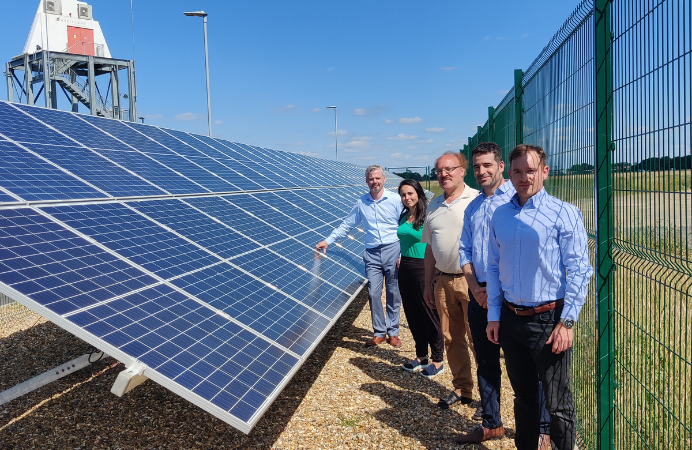 In this new series, we are introducing you to the innovation pioneers of Ealing – small businesses with big dreams of doing new or better things to benefit our area and beyond.

In November last year, Ealing Council launched its pioneers’ fund, a £1 million scheme that provides grants to 12 selected businesses based in the borough to help them grow, develop new products or expand their workforce while stimulating the local economy.

HyWaves is a hydrogen electronics company based at the University of West London that uses electrolysis to produce carbon-free (green) hydrogen from renewable sources like wind and solar energy, and are making waves in the renewable energy industry.

Most hydrogen produced today is derived from natural gas and is predominately used in industry to refine crude oil and produce fertilisers. The production is very polluting and accounts for 2% of global CO2 emissions.

Ugo Manfredi, HyWaves company’s chief technology officer, says: “We met in 2018 in McDonald’s in Shenzhen. We were both representing renewable energy companies at a conference. We decided to work together in the solar renewable field over a Big Mac.”

Many sectors in the industry agree that green hydrogen is the way forward, but it is exceedingly expensive. HyWaves is looking to drive down the costs by designing electronics that enable direct coupling between the renewable asset, solar and wind, to the electrolyser. This has the potential to drive down the cost of hydrogen produced by 25% and supports locally produced hydrogen. As hydrogen is difficult and expensive to transport, producing it here in the UK is a major advantage.

Using an electrolyser to split water, produces pure oxygen and hydrogen. The derived oxygen can be used in a medical environment, such as hospitals, whilst hydrogen can be used to power gas furnaces or provide energy for fuel cells to power heavy vehicles, such as buses and lorries.

HyWaves’ primary goal is to provide locally produced hydrogen for the aviation industry. HyWaves is working alongside Cranfield and has demonstrated excellent early results on a 1kW (4 solar panels) solar to electrolyser field prototype.

Ealing is the ideal location for HyWaves. Niall Haughian, company’s chief financial officer, says: “Ealing is a fantastic location giving us easy access to our customers. We want to decarbonise the aviation industry, so being only a stone’s throw away from decision makers at Heathrow is convenient. We are also minutes away from financiers in the City of London and Canary Wharf who will fund solar hydrogen plants. We want to educate stakeholders that the green hydrogen is going to become an economical option and that they should back it fully.”

Niall adds: “Furthermore, Ealing is really pushing for adopting clean energy to decarbonise the borough. Even down the road in Acton, number seven bus is travelling to Oxford Street being powered by green hydrogen producing absolutely no pollutants.”

Niall says: “Receiving the pioneers’ grant has been a big boost, it gave us the funds to create our field prototype, hire four permanent employees and two contractors and enabled us to secure further grant funding from the government. Having the excellent results from the prototype has helped us to become a company that can be invested into.

“By 2024, we hope to demonstrate our technology solution on a commercial plant, 20kW (64 solar panels). We will then seek private and public investment to retrofit Cranfield’s existing 1MW solar plant (3,508 solar panels) into a utility-scale solar to hydrogen plant.”

Councillor Bassam Mahfouz, the council’s cabinet member for decent living incomes, said: “HyWaves is exactly the kind of green business producing good jobs and positive ethos we are excited about having Ealing as their home. Businesses like these are an integral part of Ealing’s ambition to be THE place for innovation, as outlined in our Plan for Good Jobs. The pioneers’ fund is helping us support businesses like HyWaves to turn the tide on climate change and it’s great to have been able to support them. They really are making waves in the renewable energy industry.”

Keep up with HyWaves on their LinkedIn page.

Get business updates from the council to learn about any upcoming business support or grants.

Meet the other pioneers