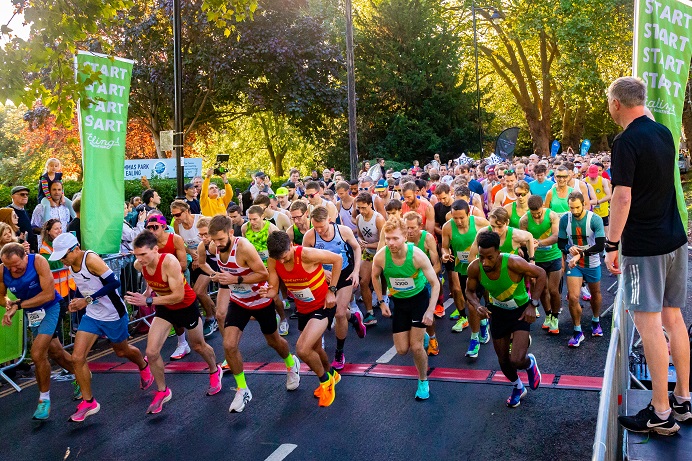 The 2022 Ealing Half Marathon took over the streets of Ealing, West Ealing and Hanwell yesterday (Sunday, 25 September) with 5,000 runners and hundreds of spectators involved as the award-winning race returned on its 10th anniversary.

John Fielding, a newcomer running his very first half marathon, took the Ealing Half title in a time of 01:08:35 after pulling away from runner-up Elias Ahmed, who finished in 01:08:53. Jonathan Poole, the returning champion, took third place in 01:11:04.

The 13.1-mile course started and finished in Lammas Park in Ealing and took in parts of central Ealing, Montpelier, Pitshanger, West Ealing, Hanwell and St. Stephen’s. Roads were temporarily closed for the safety of runners and spectators.

Runners from 92 different running clubs were taking part, including more than 305 members from the Ealing Eagles Running Club. Many runners could also be seen in charity vests, raising valuable funds for lots of different charities including Cancer Research UK, Macmillan Cancer Support and Meadow House Hospice. Ealing Council’s cabinet member for healthy lives, Councillor Josh Blacker, was one of those taking part – and he had wished everyone luck before the event.

On Saturday (24 September), the event’s version for children, the Ealing Mini Mile, took place in Lammas Park, with the biggest ever field of young runners signed up and a total of eight races across the various age categories. This year, the T-shirt given to all of the finishers featured a designed by Iva, a pupil at St Augustine’s Priory school in Ealing.

Sandra Courtney, race director, said, “The 10th year anniversary celebration of the Ealing Half Marathon has been a huge success, it’s so good to be able to celebrate the amazing milestone. We would like to congratulate everyone who took part, and thank all our runners, volunteers, team, sponsors, partners, charities and residents for their ongoing support. Ealing Half Marathon is a race for the benefit of the community, and we couldn’t do it without the support of everyone involved and all the runners signing up year after year.”

Next year’s race will take place on Sunday, 24 September 2023.  Visit the organisers’ website to find out more.