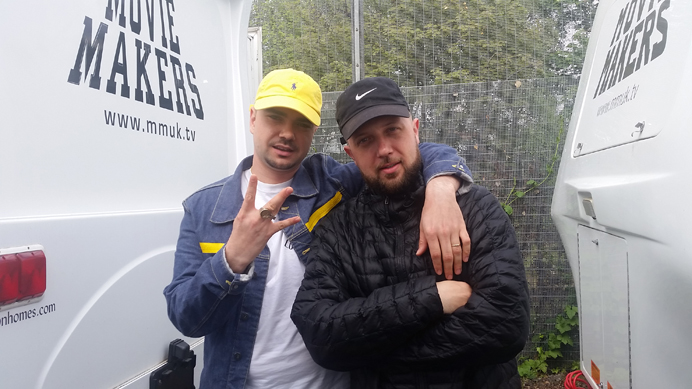 One of the West London Film Office’s proudest moments was finding an empty flat for People Just Do Nothing’s Kurupt FM pirate radio station on the South Acton Estate (208 Chesterton Court to be exact). Being so intrinsically linked to the programme I thought it was only right to arrange an interview and interrupt their lunch during filming for their latest series.

Having singlehandedly made west London 100 times more interesting than east London using a TV channel that isn’t even on TV anymore, People Just Do Nothing is clearly a phenomenon. It’s a comedy comfort blanket for ex-ravers, clubbers and beyond. You don’t really need to have listened to much garage music “back in the day” to enjoy it because the characters and jokes cut through the music scene references.

Drawing influences from Peep Show, Alan Partridge and The Office (one of the show’s producers is Office producer Ash Atalla), the programme follows garage music crew Kurupt FM as they grow up and have to figure out how the underground music life they live and breathe fits in with reality…

When I meet them on a lunch break the first thing they ask me is whether they should be in character for the interview and seem surprised when I say no. I suppose that shows how comfortable they feel being Grindah, Beats, Steves and Chabuddy G now.

Surprise surprise then that Alan, Hugo, Steve and Asim are just a completely normal bunch of guys, working hard but having a laugh. The whole crew are from west London. Brentford, Hounslow, Kingston, Feltham etc. Asim’s mum has lived in the Gurnell Grove Estate since the ‘60s.

They started off as friends first and have written and created the whole programme together. It shows in the way they bounce off each other. The first videos they created aired on YouTube and from there they were approached by producer Jon Petrie. Now they’re on series four on BBC2. Those original clips have been taken down now, for anyone thinking of trying to search for them.

Allan Mustafa aka MC Grindah is pretty gregarious, as you’d expect, but there’s no hint of a lack of self-awareness, totally unlike his character who exudes macho self-interest. In fact he’s a bit like a comedy compere in the way he likes to bring other people into the conversation and keeps thing rattling along. Should have known that, really. He’s an MC.

Been around the blocks

I start off by asking them how they dealt with the demolition of their pirate radio station flat in Acton to make way for a new block. It turns out they’ve recreated an identical version in a TV studio. A little bit of the old South Acton Estate lives on, at least as long as PJDN does.

They still come back to film in south Acton though, doing scenes around Charles Hocking House and Barwick House blocks.

Steves, who’s just as softly spoken as his character but thoughtful rather than goofy, tells me that they try to avoid the ultra-modern new build blocks when finding locations because they don’t really fit with the character’s lives like the older blocks do. They ask me if I could look into keeping a few around for future series. I say I’ll chat to the housing team…

Keeping it real…in a fictional way

Since PJDN deftly treads the line between fact and fiction I wonder if they’ve ever thought about bringing in real grime, garage or other artists to appear on the programme. It turns out they’ve had offers from major artists, which they’re incredibly flattered about, but for reasons perhaps not a million miles away from why they don’t want to film around the new-build flats, they’ve felt like bringing in a major star wouldn’t chime with their stories.

They prefer subtler ways of bigging-up the underground music scene. In a recent series a real-life former-record shop owner and scene forerunner Artwork runs a fictional record shop and in the upcoming series they’ve got a real pirate radio station crew to play Kurupt FM’s competitors on screen.

After a bit more chit-chat on topics ranging from when Crossrail is going to reach Ealing to Ed Sheeran wanting to hang around with them, lunch deliveries begin to arrive.

In a bid to try and keep things relevant to a council publication I try and cram in as many Ealing references as possible before I go. It turns out the borough has been formative in the musical lives of both MC Grindah and Beats. Back in the day they both did a music production course at the university formerly known as TVU.

You can tell food is on their minds too when they tell me that they’re big fans of a few restaurants in Ealing. Santa Maria, Mangal in West Ealing and Papaya in Northfields Ave all get shout-outs.

I leave them to their lunch. As Partridge famously once said, if music be the food of love, let’s eat it.