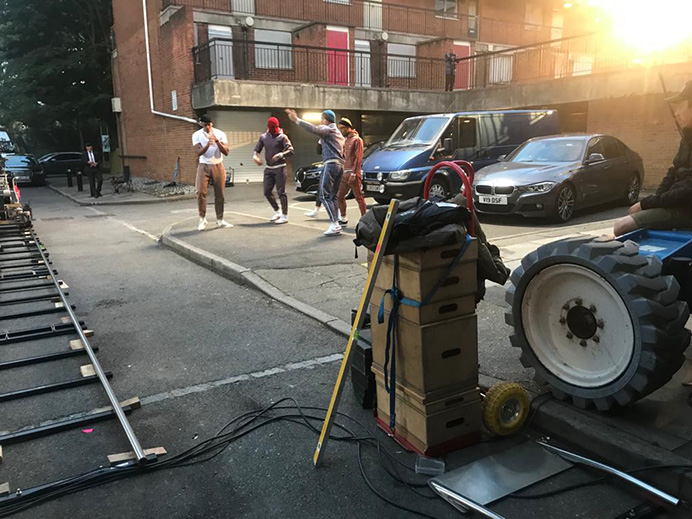 Reel Life is back after what was another bumper year in filmy world across London. And Ealing managed to get in on a fair bit of the action, too. Here are a few choice nuggets fashioned across the borough last year by the convoy of trucks, cameras and creatives that passed through.

You can see a shot from big movie The Gentlemen being filmed at Sherwood Close above. But more to come on that, later…

The series is made up of six hour-long episodes and involves Lammas Park…. no, not the actual park, but his new production company with a recognisably local name (you can tell he is from Ealing, can’t you?).

Mr McQueen and his crew shot some scenes on a bus driving down Warwick Road across Ealing Common in summer 2019.

Gangs of London is a new Sky Atlantic drama due to pummel our screens later this year. Judging by the press blurb, expect unreasonable people behaving in a threatening manner, worried looks and tense situations. And probably guns. If they can recreate a kind of Godfather with cockney accents though, that’d be nice.

The production took over two flats on the seventh floor of Barwick House in the South Acton Estate last May. There was talk of them knocking the two flats together into one mega-flat, but the land of make-believe was stiffly chastened by the real world of asbestos and HSE involvement, so the idea was sadly abandoned.

Ealing Town Hall managed to shoehorn one last feature film into its hallowed corridors before part-transmogrifying into a hotel.

The Dig is a part-fictionalised version of the discovery of the Anglo-Saxon ship burial site in Sutton Hoo, much of which is now in the British Museum.

It is based on the eponymous book by John Preston who was the chief TV critic at the Sunday Telegraph and, more relevantly, nephew of the real-life main character Peggy Preston who is credited with the most important part of the find.

Peggy is due to be played by Lily James, co-starring with Carey Mulligan and Ralph Fiennes. Ealing Town Hall was cast as Ipswich’s very own Ipswich Museum.

Finally, Guy Ritchie’s The Gentlemen returned to Ealing in summer 2019 to polish off the final scenes after they’d visited at the end of 2018 to crash a car in Acton.

Sherwood Close was the scene of rapper Bugzy Malone’s performance which you can catch a snippet of in the trailer below after 55 seconds.

The Gentlemen was out at the beginning of 2020 and, rumour has it, Mr Ritchie has been back in the area on his latest production too.

Want to get in on the action?

Read our article on how you could get your own property in on the action by making it available for filming, through the West London Film Office.