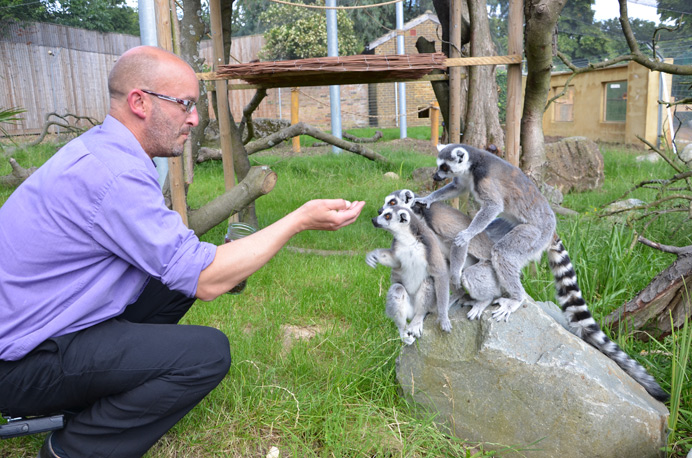 Hanwell Zoo has won a national award for its work to help educate people about the conservation of wildlife.

The zoo won a British and Irish Association of Zoos and Aquaria (BIAZA) gold award for its project called Equity in Conservation Education. It was one of only two gold awards given by BIAZA in this category for 2019, and it was the first time the zoo has won a gold award.

Hanwell Zoo has established itself in a prominent role in the zoo education industry. Its staff pride themselves on the inclusivity of their programmes and the work they do in the community – including thousands of local school children participating every year – and this award highlights the educational aspects of what they do and of the zoo’s equity project.

The zookeeper who is the driving force behind this project, Beau-Jensen McCubbin, said “Equitable practices in conservation education is an emerging field and to be recognised for our efforts on a national level is very humbling. The recognition and admiration we’re receiving for our work shows how the topic’s importance is being taken seriously.

“At Hanwell Zoo, I’ve been allowed to expand our programmes and pioneer efforts in certain areas that would not have been possible without the support of Ealing Council and my colleagues.

“My manager, Jim Gregory, has been incredibly supportive and encouraging over the years and I credit him for highlighting areas in the practice that required overhauling. As an industry, zoos’ conservation messages are often only heard by those who are privileged enough to visit one. Our conservation education programme on equity ensures that these messages and experiences are accessible and understood by as many as possible.”

Dr Kirsten Pullen of BIAZA said, “Our annual awards ceremony recognises excellence in the work being carried out by our zoos and aquariums as well as our associate members. Our community is committed to conservation, education, research, and having the highest levels of animal welfare and this is highlighted by the incredibly high standard of award submissions this year.”

Hanwell Zoo holds a number of animals whose numbers in the wild are declining. Bali starling, red-crowned crane, phantasmal poison arrow frog, Azara’s agouti and the hazel dormouse, to name but a few. The zoo has played its part in international efforts to ensure these species are well looked after in captivity, and their numbers kept at sustainable levels with the long-term aim, in some cases, to release them to their native habitats. In recent years, Hanwell Zoo has seen particular success with the Mindanao bleeding-heart dove, whose numbers may be as low as 1,500 in the wild. And the hope is that, one day, large numbers will be able to be released in the wild in the Philippines.

We featured some of this work in a previous article, and looked more closely at the bird species at the zoo.

BIAZA is a professional body that represents more than 100 zoos and aquariums, which have each made a commitment to be at the forefront of wildlife conservation, education and research. They are able to display the BIAZA logo to show they are involved in research and education projects and conservation programmes.