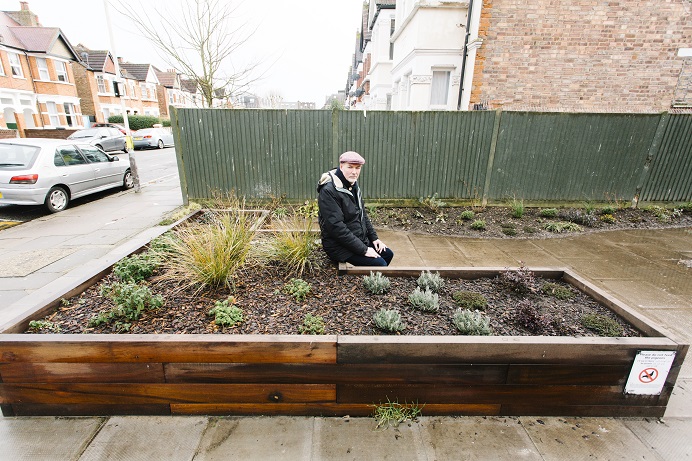 David Highton is the chairman of West Ealing Neighbours, a residents’ group which, among other things, is working hard to maintain a recently rejuvenated spot on the corner of Melbourne Avenue and Leeland Terrace. It was transformed from an unloved scrap of grass into a paved area with flower beds by Ealing Council, with help from the residents.

“Once a month we have a group of volunteers to keep it clean,” David said. “Those who come are all ages – from a young couple who have recently moved in to the area, to people like myself who have retired. People like that the area is looking nice; they like the plants; they appreciate that the area is being made more attractive.”

Despite having to deal with the unwelcome deposits of pigeons when some people unhelpfully encourage them with bird feed (feeding pigeons in public spaces is an offence under the 1981 Environment Act), West Ealing Neighbours is not deterred from keeping the space looking nice.

“I don’t think you should always expect the council to do something for you,” said David. “Sometimes I think it is better to do it yourself. You might need the council’s permission, or you might need a bit of help, but I think a group of locals getting together to do something is quite powerful. I think that is more effective than the council coming along and doing it and then going away. I think that sense of ownership, and improving a little bit of land, can make a big difference.”

Another example of residents being actively involved in improving their area was cited by David. The not-for-profit residents’ group West Ealing Community Interest Company organises a range of events for all ages to enjoy. This includes the Soundbite music and food festival, which takes place every September in Dean Gardens.

The council has recently revamped a community website called Do Something Good which helps residents, whether groups or individuals, to come together to set up new projects or get help with existing ones; to volunteer, or to ask for volunteers; and much more – including finding help with fundraising options. Go to the updated website to find out more.

The volunteer sessions are part of a range of activity taking place in West Ealing. Live West Ealing, has gained £8.6million in funding from Transport for London. The money will primarily be used for schemes to make it easier to get around the town and reduce car dependency. There are more stories available on the programme on Ealing News Extra.