Home > Smart moves for better travel in the new normal 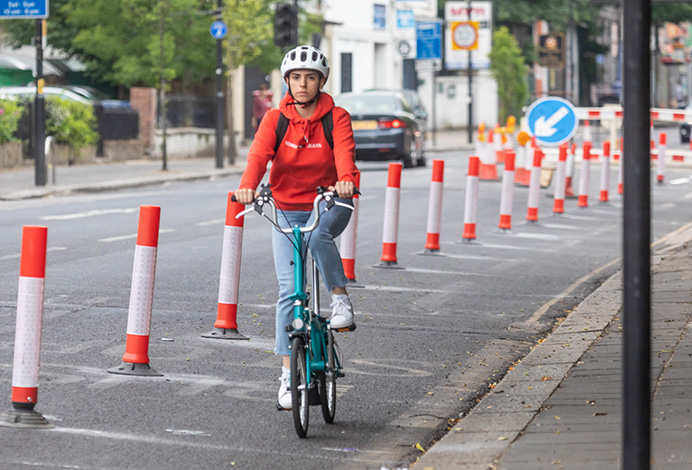 Smart moves for better travel in the new normal

With social distancing rules still in place, it is vital people find alternatives to cramming on to public transport, wherever possible, to reduce the spread of COVID-19 and support the NHS. And jumping into your car instead is not always the right answer. Here, we look at ways it is being made easier to travel in other ways.

Ealing Council has been working with Transport for London (TfL) to make it easier, and safer, for residents to travel around the borough by bike or on foot instead.

Research by TfL shows only a third of the car trips made by Londoners are for a distance of more than three miles. That means that two-thirds of car journeys are for shorter distances – journeys that could potentially be made in other ways.

Council leader Julian Bell said: “We need to take the pressure off the public transport system, which is running at lower capacity. And many people are also, understandably, worried about the greater risk to health of travelling in an enclosed space anyway.

“But, if those people who previously made their journeys on public transport now decided to jump in their cars instead, we’re going to exacerbate the air quality problems that we’ve already had for many years. Nearly 10,000 people were dying prematurely in London because of poor air quality.

“During lockdown, roads have been quieter and air quality has markedly improved.

“Recent data has shown that we have seen an average reduction of around 25% in nitrogen dioxide levels, and almost 5% in the levels of particulates across monitored sites in the borough.

“It would be a terrible shame to waste all of this improvement and to return to pre-COVID levels of pollution. Let’s not exchange one medical emergency for another through poor choices.

“Cutting harmful emissions from car exhausts is also an important part of us tackling the global climate emergency as a society.

“The more of us who can make our shorter journeys by walking or cycling, the better.”

Jessica Kang, who lives in Southall, started learning to ride a bike earlier this year. She said: “There are so many benefits to cycling – to yourself and to the rest of the environment.

“It contributes to increased cardiovascular fitness and improved mobility and muscle strength. It is much cheaper than a car, and cuts down on greenhouse gas emissions, noise and air pollution. All the benefits are motivating me.”

Jessica, who won the London section of Miss England 2020 and will be in the national finals in October, added that she wants cycling to play a useful role in her exercise routine.

More space for walking and cycling is being created to help us all travel around the borough safely – and to shop safely as high streets reopen. It will also help us to keep the cleaner air that has resulted from the big drop in traffic during lockdown.

Some people will fear travelling in the confined spaces of buses and trains. And public transport will be running at reduced capacity, anyway, and restricted because of social distancing.

So, Ealing Council is making temporary and permanent changes to some footpaths and roads to help; and is also applying for funding to make more.

New, segregated cycle lanes have been introduced in Acton, Ealing and Southall by the council and its cabinet recently approved a report with plans for 200 other travel schemes to make walking and cycling easier and safer.

Councillor Mik Sabiers, the council’s cabinet member for environment and highways, added: “We are looking at a number of ways to help pedestrians to maintain social distancing and for cyclists to get around more safely, too. It will make it easier to get around locally by walking or cycling. This, of course, can take the pressure off public transport, and help restrict the spread of COVID-19; but it is also an opportunity to make positive changes in the long-term for our physical health, air quality and the environment by encouraging people to swap four wheels for two – or simply for your trusty feet.”

The segregated cycle lanes are designed to run alongside the main road lanes for general traffic. They are separated by cycle wands (plastic posts) which help to clearly define the boundary to all road users. The lanes have also been widened in places.

For example, in Acton, they have been added to sections of the westbound lane of The Vale (pictured at the top of this article), between Bromyard Avenue and Larden Road; eastbound beside Acton Park; and northbound, along Greenford Road between Uxbridge Road and Fleming Road.

Resurfacing of the road surface in The Vale has also been taking place in the with the aim of creating a smoother, quieter road surface with cycle-friendly gullies that prevent wheels from getting caught in grates – and also repairs being done to drainage and manhole covers. Once resurfacing is complete, extensions to the new cycle lanes will be put in place.

The council is planning to expand the use of similar segregated lanes
and cycle wands, as well as other schemes, as quickly as funding from Transport for London (TfL) and national government allows it to.

Using temporary measures like cones – and ramps to help those with impaired mobility and parents with buggies – a wider footway has been created in several busier locations to create more space to travel and get past one another at a safe distance.

This includes widening the area for shoppers in several spots in Ealing Broadway; and in West Ealing, near Lidl; and in Hanwell, by the post office and surrounding shops in Uxbridge Road. But there have also been other changes such as widening a previously narrow pathway in Pitshanger Park to provide a safe gap for people and bikes to pass one another. And also temporary widening of pathways next to bus stops in Boston Road, Hanwell; Ealing Road in Northolt; and South Road, Southall.

Meanwhile, in busier high streets, signs have gone up and stencils have been painted on the ground, as reminders of the social distancing rules.

For more tips on walking and cycling, and active travel, visit our story at ealingnewsextra.co.uk/features/active

Nine areas across the borough will be designated as ‘low traffic neighbourhoods’ (LTN) to reduce the amount of rat-running and air pollution.

An LTN is a group of residential streets, bordered by busy main roads. Although residents living there will still have easy access, it will become more difficult for others to drive straight through from one main road to another and treat the area as a rat-run. This can reduce air pollution, lower collision rates, increase community activity, encourage people to switch to greener forms of transport and make streets more pleasant.

Ealing Council has secured more than £400,000 of funding from Transport for London to put in the nine LTNs, which will include measures such as bollards, speed humps, double yellow lines, greening of streets, additional seating, cycle parking, 20mph speed limits and new signs.

The nine locations will be announced soon. Read more here.