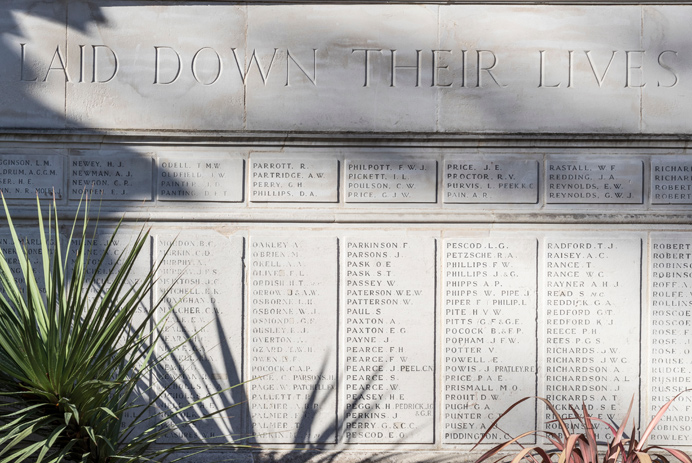 A two-minute silence will, as ever, take place on Armistice Day at 11am this Saturday (11 November) – echoing the so-called ‘eleventh hour of the eleventh day of the eleventh month’ of 1918. This was when the armistice treaty between the opposing sides of the First World War came into force, to officially cease hostilities; although the exact timing was probably not quite so neat.

The 100-year anniversary of the First World War (1914-18) has continued to be commemorated nationally and this summer marked a century since some of its most significant battles, including Passchendaele.

In Ealing News Extra’s history section there are lots of stories relating to the First World War and how it touched our borough and the lives of the people who lived here. Just type ‘first world war’ into the search option on the site, or browse through ealingnewsextra.co.uk/history

Many of the stories relate to local heroes commemorated on local memorials and their actions during the war, not least those of Harold ‘Houdini’ Medlicott. His story reads like a Hollywood script. He escaped from German prisoner-of-war camps at least 10 times. Prior to being imprisoned, he was one of the early Royal Air Force’s leading fighter pilots and his repeated escapes made him a hero to other prisoners. Others tell the tales of how families of soldier helped to restore their names to the memorial in Ealing, such as that of Herbert Crook.

Other less inspirational tales include a riot in Acton in 1915 when anti-German sentiment spilled over into violence against German shopkeepers.

There is also a piece on ‘the war years’ which breaks down local events across the period of 1914 to 1918, year by year.

Take a look at ealingnewsextra.co.uk/history for other stories on the first and second world wars and lots more besides.

Members of the public are invited to join councillors, who will be observing a two-minute silence outside Ealing Town Hall at 11am on Saturday (11 November).

On Remembrance Sunday (12 November) the country will stop at large to commemorate the sacrifice of our armed forces, past and present. Services and events will take place at war memorials across the country – and across our borough.

Mayor of Ealing, Councillor Simon Woodroofe is due to attend a service at Ealing War Memorial on Ealing Green, in front of Pitzhanger Manor, with a two-minute silence at 11am. The mayor will be joined by the deputy leader of the council, Councillor Ranjit Dheer.

The local branch of the Royal British Legion marches each year to Greenford War Memorial from its headquarters in Oldfield Lane South for a public service at 11am. This year it will be attended by council leader Julian Bell and deputy mayor Councillor Tejinder Dhami.

A short service will take place at the war memorial on the Green in Southall, followed by a two-minute silence at 11am. The congregation will then parade through King Street into St John’s Church in Church Road for a service. This will be attended by the immediate past Mayor, Councillor Dr Patricia Walker, and the council’s chief executive, Paul Najsarek.

School service and one at Acton Care Centre

On Friday (10 November) a two-minute silence will be held at Featherstone High School in Southall.

The school has a war memorial which was paid for by local people and unveiled in 1921 to commemorate the 221 pupils from Featherstone Boys’ School, as it was then, who died fighting in the First World War. All of their 221 names are inscribed on the memorial.  At 11am on Friday the whole school will stand around the memorial to mark the silence, and will listen to a rendition of The Last Post and lay poppies and wreaths at the foot of the memorial.

Meanwhile, the mayor and Acton councillors attended the Acton Hospital Remembrance service at Acton Care Centre at 3pm on Sunday, 5 November which is traditionally held a week before Remembrance Sunday. Injured servicemen were cared for at Acton Hospital in Gunnersbury Lane, following the First World War and it later became a war memorial.