Home > Serving up skills through SEARCH 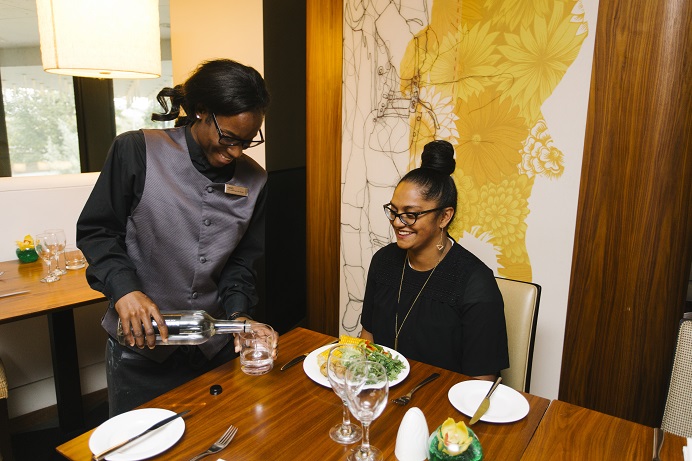 Serving up skills through SEARCH

Young people with learning difficulties from Ealing are gaining employment opportunities and skills through a scheme backed by Ealing Council. Project SEARCH is an internship programme run as a partnership between Ealing Council, the West London Alliance and Ealing Mencap, at the Hilton London Heathrow Airport Terminal 5 and West London College.

The scheme helps young people with a range of learning disabilities, including autism and Down’s syndrome, who are trained in vocational skills to help them gain experience to further their career.

This is something that needs to be addresses locally and nationally because only 6% of adults with a learning disability known to their local authority in England are in paid work, according to Mencap.

SEARCH is being run at the college and the hotel. The Hilton was, it is believed, the first hotel group in the UK to get involved in a scheme like this and, over the past five years, it has supported more than 40 young people with learning difficulties to be trained as waiters, receptionists and porters.

‘I really enjoy it’

Angel is from Ealing and now works full-time at the Hilton at Terminal 5 after completing the SEARCH internship programme. She said: “I polish cutlery, glasses and get everything ready for the breakfast. I have worked here for two years and I really enjoy it.

“I used to go to college and I did cooking and I always wanted to be in the catering business.

“My first day I was nervous, but I have done three rotations since then and this has made me more confident in what I do now.

“I had a buddy when I first started and I learned a lot from them and I now train interns myself and show them what I do and teach them what I have learned.”

All the interns at the hotel are support by Ealing Mencap job coaches, including Jai Upadhyaya, who said: “When Angel started here she was very nervous and lacking in confidence, but through the skills she has picked up here she has really grown as an individual. She has become a valued member of the food and beverage team. She has worked so hard and shown so much enthusiasm in her role that she successfully managed to get a job here at the Hilton.

“Not only do the interns learn the skills that they need in the hospitality industry, but it also helps them overall in their lives through confidence building, travelling independently and being able to manage and look after their money. They pick up so many skills that help them in their overall running of life.”

‘The confidence to flourish’

Councillor Jasbir Anand, the council’s cabinet member for business and community services, said: “It is really important that everyone has the chance to work so that they have a stake in our society. That is why I am so proud to have Ealing Council working on this project and to see the development of the skills of young adults with learning difficulties. This means that they can not only forge their own career, but also build the confidence to flourish in their lives.”

For more information on the SEARCH project visit the Ealing Mencap website.