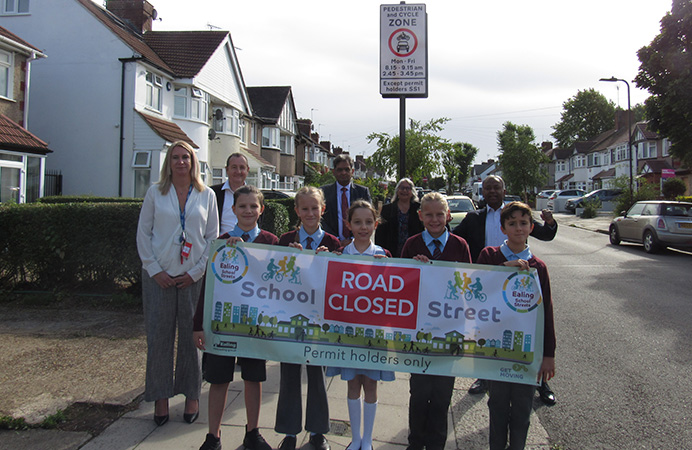 After much preparation and anticipation, the first ever Ealing School Streets have opened. Perivale Primary and St John Fisher Catholic Primary were the first to have permanent School Streets, but there are 14 additional, temporary ones to come later this month. As you can see in the video above, council leader Julian Bell went to visit a new permanent one in Perivale.

WHAT IS A SCHOOL STREET?

School Streets is a scheme being led by Ealing Council which will see streets near a school being closed to traffic at school opening and closing times, making them pedestrian- and cycle- only zones. This helps to achieve a safer, more pleasant environment for everyone using the streets while maintaining access for residents (who will have permits) and businesses within the designated zone, and all pedestrians and cyclists. Physical barriers manned by volunteers during the restrictions, and ANPR (automatic number plate recognition) cameras, might be used to enforce the closure. They will all have signs to inform drivers of the restrictions.

Councillor Bell said: “Essentially, we block the surrounding roads of the schools to traffic for an hour or so at drop-off and pick-up times and cars are not allowed within the zone during those times. Residents will have permits, which will allow them to leave and come back and have free access.”

Find out more on the permanent School Streets at www.ealing.gov.uk/ealingschoolstreets

Councillor Yvonne Johnson, deputy leader of the council and cabinet member for schools and children’s services, said: “Because of the impacts of COVID-19, the council’s school travel team has been firing on all cylinders to facilitate the safe return to schools for families by enabling social distancing on the school journey. As well as footway markings outside school entrances, they have also been preparing the launch of temporary School Streets at 14 schools from 28 September.

“These temporary School Streets will be managed by the schools themselves, using moveable lightweight barriers. This allows a greater space around school entrances for families all travelling to the same place, making social distancing easier as well as facilitating active travel. Encouraging children to walk, cycle and scoot plays a role in reducing congestion and air pollution around the school gates and is also great for children’s mental and physical health.”

Visit the emergency COVID-19 transport measures pages on the council website www.ealing.gov.uk/transport for more on the temporary measures.

Councillor Bell added: “School Streets is part of the wider active travel initiatives that we’re taking, both long term to tackle climate emergency and poor air quality but also in the immediate aftermath of the lockdown due to COVID. We need to get more people cycling and walking. There’s less capacity on public transport. If everybody jumps in their cars, we’re just going to get gridlocked and we’re also going to choke in all the fumes and emissions that are coming from our cars.”

With schools back, it might also be a good time to consider hosting a PlayStreet at yours. They function in a similar way to a temporary School Streets, but only with closures allowed up to once a month. The intention is to allow and encourage safe play, therefore sessions usually take place after school for a two-hour period. For more information, visit www.egfl.org.uk/services-children/playstreets-schools