Home > How Sam is building a career in construction 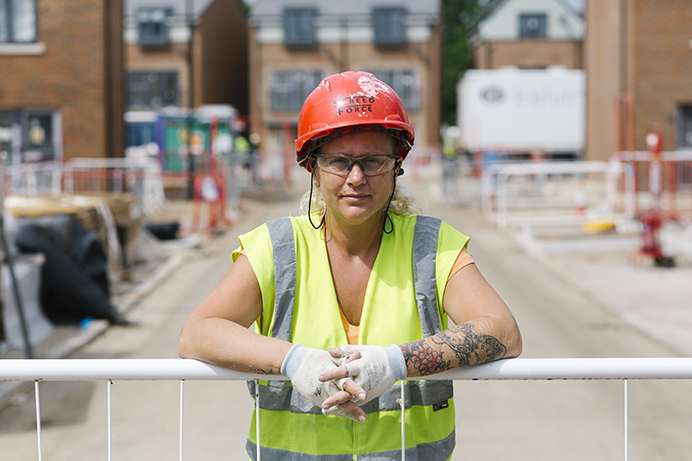 How Sam is building a career in construction

Single mother, Sam Smith, is not your ‘typical’ construction apprentice, but she says she is ‘reaping the rewards’ of choosing a trades apprenticeship as a career path and thinks more women should follow her lead.

Ealing Council has pledged to generate 750 apprenticeship places by 2020 and is already a third of the way to meeting this goal.

The council’s Ealing Apprenticeship Network helps businesses to set up apprenticeships and to find the right people to fill them. One of these people is Sam.

Sam works on the Havelock Estate regeneration project in Southall. Working with Screed Force as a tape and joint, and dry lining apprentice, she is part of the team that builds, lines and prepares the surface on the internal walls within the new homes.

‘I am glad I have done the apprenticeship’

She was looking after her children and picking up odd jobs here and there, when she heard about a jobs fair in Southall.  With previous tiling experience, which included working on the platform and walls at Shepherd’s Bush underground, Sam decided to go along and find out what local opportunities were available.

“Working in construction is great,” she said. “You have a good laugh and I love the banter every day. I get on with everyone and they have made me feel welcome.”

Her role allows her to work closer to home and the early finish means she can spend more time with her children.

She said: “I am glad I have done the apprenticeship because I can work alongside getting another skill, an NVQ, under my belt and it’s a bonus that I live down the road. My children go to school and nursery around here, everything is on my door step so if I need to get to anything I can.”

Sam wants to be a role model for other women looking to work in construction to show that anyone can be successful in the sector.

She was invited to attend the 10th anniversary of Women into Construction, an organisation that supports women in construction trades at all levels. She hopes to work with the organisation further so that she can be an ambassador, encouraging and inspiring women to take up roles within the construction sector.

‘You don’t see many women in construction’

“You don’t see many women in construction,” said Sam, “they are mainly in the offices, but you don’t see women in the trades and I think anything a man can do, we can do better.

“I love everything about my job. I have learnt how to do everything now including suspended ceilings. I love going in and doing the patching-up and then seeing the end result.”

Named Ealing Apprentice Network apprentice of the year in 2018, Sam now attends events as a guest speaker encouraging others to take up similar roles.

“I would definitely recommend doing an apprenticeship,” she said. “You are working and getting a skill at the same time. You learn a lot more on site than you would if you were just going to college, you get hands-on experience. Also, with the apprenticeship instead of going to university or paying out big bills I am getting it all for free – experience and training in one.

“It’s good for me to get up in the morning and show my kids that when you are older you do work, and show them the stuff that I have achieved and make them proud. It was a struggle to begin, you know, trying to pay bills on low wages, but I’ve got there in the end and I am reaping the rewards now.”

Want to be an apprentice?

Think an apprenticeship might be right for you? Find out more by visiting ealingworkwest.com or contact the Ealing Apprenticeship Network at apprenticeships@ealing.gov.uk or on 020 8825 6234.