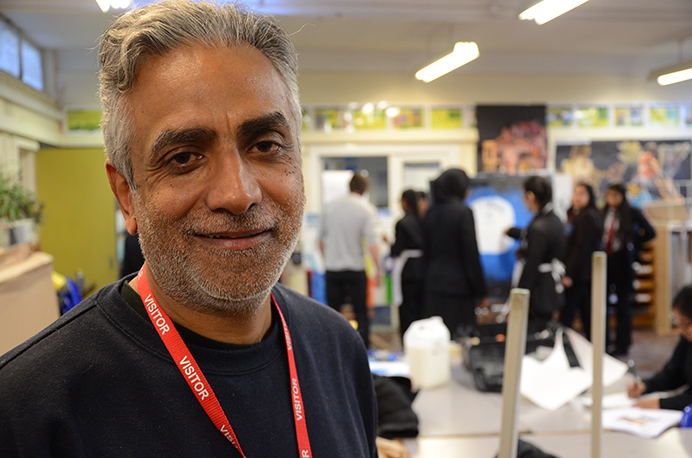 This April will mark the 40th anniversary of the Southall riots and an exhibition called Southall Rising is being held in the town to look back at those tumultuous events – and the changes that have taken place since.

More than 300 people were arrested by police and hundreds more hurt as battles broke out when protestors tried to prevent the far-right, racist National Front party from holding a meeting in Southall Town Hall.

Tragically, a teacher called Blair Peach was killed. He was one of many people from diverse backgrounds who had gathered to protest.

Inspired by the anniversary, a multi-media project called Southall Rising started in September and will culminate with an exhibition at the Dominion Centre from 23 April – the actual anniversary date. It will also appear at Southall Town Hall, some local schools and even at the annual convention of the teachers’ union NEU (formerly NUT) in Liverpool and at its central London headquarters. The project has brought together residents, artists, students and Ealing Council – and support from across the community.

Southall Rising was conceived by journalist Vivek Chaudhary, who has lived in Southall all his life. He was a teenager when the riot took place and said he wanted to use his professional contacts to put a project together to chart Southall’s journey from the epicentre of a riot based on race, making headlines around the world, to a diverse, vibrant and culturally rich town. He also wanted to examine how the town had transformed over the past 40 years and what its future holds.

He said: “The exhibition in April will include photography and writing but the bulk of it will consist of film and urban art – they will be the most engaging way to tell the story.”

Since September, local school pupils have been taking part in learning workshops and producing art for the exhibition, with the help of artists. You can see some of the works-in-progress in the photos on this page – and in the video above – by Featherstone High School pupils.

Pupils from three other schools are also involved: Villiers and Greenford high schools; and Blair Peach Primary, which was named in honour of the teacher who lost his life in 1979.

Vivek said: “It was an opportunity to make the younger generation aware of the events of 1979 in a way they would find appealing – and to give kids in Southall the chance to get involved in art and to experience being part of a creative process,” added Vivek. “They have not only been producing art with artists and learning about history and discussing topics, they were also helping with the film we put together for the exhibition – suggesting locations to visit and also taking part in editing workshops. We will be doing various other activities with them too, including a visit to a BBC newsroom.”

‘When I tell them about it they are shocked’

We went to one of the workshop sessions being held at Featherstone High School and asked Vivek how the students had responded to the project.

He said: “In 1979 I was in school – roughly the same age as the pupils in this workshop today. And when I tell them about it they are shocked. But it has stayed in my memory, like it has for all of those in my generation who were there. It is still with us. It was a day of fear and terror – it was as bad as that. You couldn’t get in or out of Southall and there were police everywhere. It was a brutal attack on the whole community and the wider anti-racism movement. And, to this day, nobody has been charged with Blair Peach’s murder.

“Most of the children didn’t know about the events at all. Some knew a bit through grandparents and parents, but they still had no idea of the full impact.

“I don’t want to drag up negative stuff, that is not what this project is about. But it is part of our history and it is also a chance to reflect on the changes that have taken place since – a lot of it has been so good – and the positive things we have as a community. And it is also interesting to put it all into a modern context with some of the issues around at the moment.”

The council was first to offer support for the project, and its Southall Green ward forum (Vivek’s local ward) was the first to offer funding, followed by Southall Broadway ward forum. This helped him to gain other support, including funding from the Near Neighbours community group, the teachers’ union NEU (formerly the NUT) and the Awards for All National Lottery Fund. Local businesses have also offered support in kind.

“Lots of different people are involved now,” said Vivek. “It is a genuine community effort, which is really positive.”

Guided walks around Southall relating to the project are also being planned. Find out more about the walks by following Southall Community Action Group on Twitter @SCAG65 or visit the southallresists40.com website.

Councillor Jasbir Anand is one of the ward councillors in Southall Green who first backed Vivek’s idea for Southall Rising.

Councillor Anand, who is also Ealing Council’s cabinet member for business and community services, has been an enthusiastic supporter of the project ever since and visited one of the workshops at Featherstone High School.

She said: “I’m not sure whether people who lived through the terrible events of the late 1970s and early 1980s in Southall realised they were witnessing history in the making. However, looking back with the perspective of 40 years under the bridge, it is now clear to me that they had a profound impact on shaping the Southall we see today, and indeed the borough and the country.

“Out of tragedy, hate, and overwhelming change our communities built a lasting legacy of a vibrantly tolerant and diverse town, which endures to this day. One only has to spend a few hours in Southall to feel the kind and colourful community the town has become.”

Read an article on the 1979 riots by borough archivist Dr Jonathan Oates.