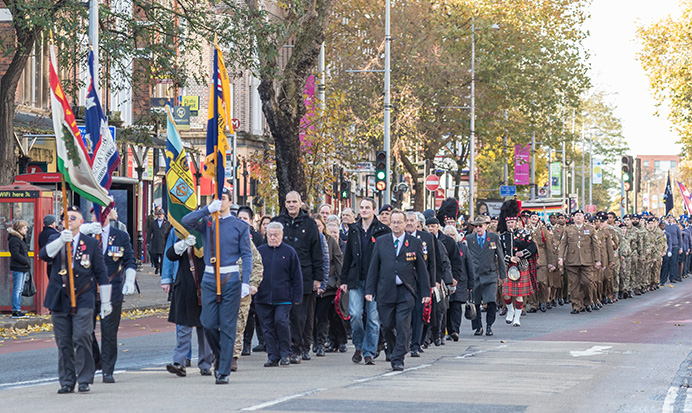 Remembrance services will be taking place across the borough during the next week, leading up to Remembrance Sunday on 11 November. Ealing will join other places across the country in lighting a memorial flame that evening, while you may notice three evocative, wire-framed statues denoting First World War soldiers. Other events are also planned.

While Remembrance is an annual, national commemoration, this year’s is made all the more poignant by the fact it will be the 100-year anniversary of the armistice of 1918 that signalled the end of the First World War. We have been running a series of stories of the impact of the war on our borough in our history section.

While many schools and churches will be marking it in their own ways, there are several major services due to take place.

Service at Southall War Memorial at The Green. Attended by immediate past mayor, Councillor Simon Woodroofe and Southall councillors. A two-minute silence will be observed at 11am.  Those attending will then be invited to parade through King Street into St John’s Church in Church Road to a Remembrance Service.

‘There but not there’ statues

Three wire-framed statues will be placed to commemorate and remember those killed. They are part of the ‘There but not there’ art installation across the UK and each represent the figure of an Allied First World War infantry soldier, or ‘Tommie’. These silhouettes will be installed with plaques marking the sacrifice of the men and women, placed in the communities they left behind.  They will remain in place for the centenary year at Ealing Town Hall, Southall Town Hall and Acton Library.

For more details on ‘There but not there’ visit www.therebutnotthere.org.uk

‘Many names carved into the borough’s war memorials’

Council leader Julian Bell said: “When you look at the many, many names carved into the borough’s war memorials it brings home to you how much of a sacrifice they made on behalf of their country. Every year, Remembrance is a chance to honour and respect that sacrifice, both then and now. But with this being the centenary year of the end of the First World War, I feel the sacrifice made is even more poignant.”

You can read Councillor Bell’s blog post on the armistice centenary here.

Other events and talks

Remembering the First World War – Gunnersbury Park Museum, Wednesday, 14 November 7-8.30pm. Two talks are available with tickets for both priced at £10. Booking is required through the museum website  www.visitgunnersbury.org for the following: