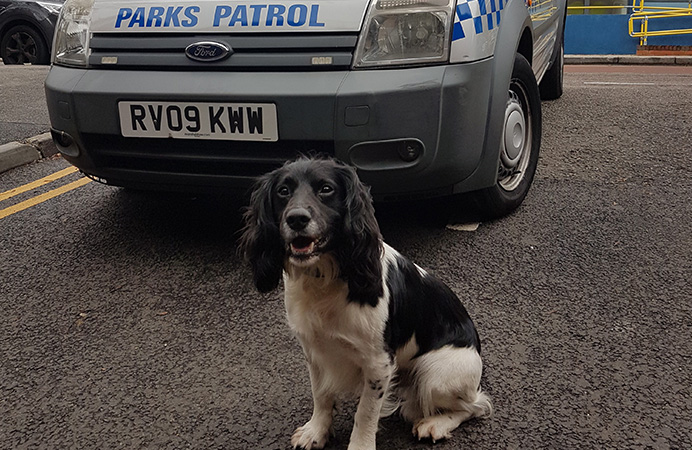 Charles is an English springer spaniel and a drug detection dog. He is part of a team patrolling our parks, open spaces and the council’s housing estates, helping to keep residents safe.

The Parkguard team of officers and dogs has been working with Ealing Council and Ealing Police since 2012 – spotting potential trouble, referring vulnerable people to support services and gathering information on anti-social behaviour and crime for the police and council to use. They can also enforce the council’s public space protection orders (PSPOs) that are in force in various parts of the borough to keep public areas safe.

On any given day there are up to four officers patrolling the borough, from an overall pool of eight. They have all built up local knowledge and relationships with residents and community groups, which all helps with fulfilling their role and gathering information.

Joe Lazone, Parkguard’s west London services manager, said: “The patrol officers take great pride in patrolling the borough and enjoy it. The combination of parks, open spaces and estates we cover means they encounter a wide range of issues and each patrol can be very different to the last. We are very well received by the public and are regularly stopped and thanked for keeping those areas safe.

“Our patrols are aimed at detecting, deterring and preventing anti-social behaviour, crime and issues that might affect residents’ quality of life. We also collect information and intelligence that facilitates longer-term criminal action by the police and civil enforcement action by the council.”

‘Dogs not just used for their noses’

The team has used its dogs over the last year to help the council and the police carry out 582 searches for drugs and 356 searches for offensive weapons.

Joe said: “We have a selection of dogs that we use in Ealing. Breeds include English springer spaniels like Charles; Labradors and shepherd breed dogs. The spaniels and labs are used for drug searches – they can detect several different types of drugs; and the shepherds are often used for weapon searches, detecting the most recent human scent left on items that have been hidden such as stolen property or weapons like knives.

“The dogs are not just used for their noses. We also ensure they are all approachable and very well socialised – which is crucial because our work is all carried out in the public domain. We take them to schools and open days to do talks – and they are an excellent way to engage, especially with children. At the last open day we did there was a queue of people to meet Charles the springer spaniel and Ink the Labrador.

“They are in no way intimidating and they usually actually attract people to approach us. Because of the high level of training and the selection process all the dogs are socialised very well and like nothing more than to be fussed over by members of the public.”

Being on the front line of community safety in the borough’s parks and on its streets, the Parkguard team plays a vital role in guiding people towards sources of help, as well as uncovering critical evidence to tackle crime.

“Our intelligence gathering has resulted in civil injunction orders, criminal behaviour orders and, in some case, prison sentences,” Joe said. “In some cases, this has had a tremendous impact on residents’ quality of life.

“And, over the years, we have completed thousands of weapon sweeps, removed hundreds of knives, located numerous drug cultivators. We regularly find drugs and weapons during searches and among our most recent finds were £300 worth of cannabis and a machete – which were all handed over to the police.

“But I would say nearly 75% of our work consists of harm-reduction activities such as homelessness referrals, welfare checks on vulnerable individuals, referrals to drug and alcohol services and other safeguarding matters. We have referred hundreds of people into support services and offered reassurance to thousands of residents.

“It is hard to pinpoint exactly which of all the things we have done are most noteworthy, but I’d say the biggest success has been the harm we have prevented, in partnership with the council and the police.”

Councillor Joanna Camadoo, the council’s cabinet member for community safety and inclusion, said: “Parkguard patrols add a very useful and welcome layer of support to the police and the council by providing an additional presence in the community. As well as increasing public reassurance and building relationships, the patrols have proven adept at disrupting anti-social behaviour and gathering intelligence. Alongside enforcing the law, they deliver valuable support with wider community issues and referring homeless people to outreach services is just one of the very human elements of their work.”