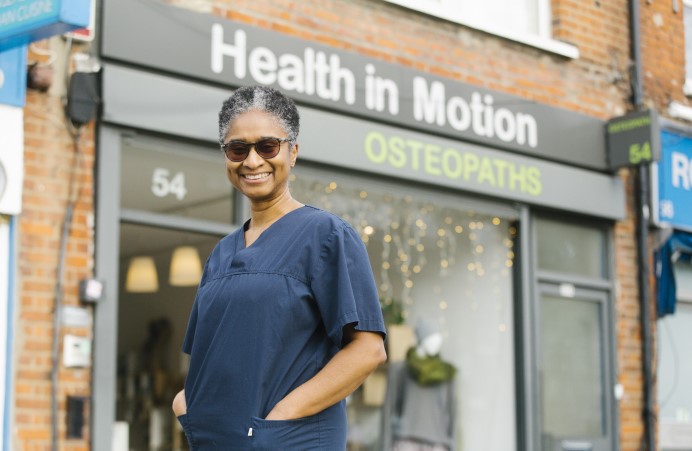 Despite being permitted to open during the coronavirus pandemic, a local osteopath still feared for her clinic – and then found the crisis actually created some additional customers.

Health in Motion, in Pitshanger Lane in Ealing, chose to close back in March 2020, while its leader/owner Lola Phillips sought ways to ensure patient and employee safety before reopening.

“We were exempt from having to close as long as we could ensure employee and patient safety,” she said. “But I was not sure how we were going to do that.

“At that time there was no guidance from the osteopathy regulator, and there was no PPE [personal protective equipment] to get hold of, so I could not guarantee that I was going to be able to do what was necessary to keep people safe in this setting.”

Instead, Lola spent time training and developing skills to continue providing treatments remotely and offered free telephone and video consultations to patients. She also got to work tracking down much sought-after PPE.

“I don’t feel as if I ever stopped working to be honest,” said Lola. “I decided that I needed to scan the internet every day for PPE, sorting out the risk assessment to identify how we were going to run things safely and talking to patients either on the phone or video calls.

“I actively promoted our free teleconsultations because I didn’t want to have a sign up that said, we are closed.”

Finding PPE was proving particularly difficult, and it was essential to being able to resume face-to-face appointments, so Lola sought help from the Mayor of London’s Pay it Forward crowd-funding scheme.

She said: “I’m not quite sure how I found it, but the initiative was for businesses like mine to encourage our patient base or our community to pay for our services at that time, during lockdown when they were not open, with a promise that they could redeem the money spent at a later stage when we reopened.

“I looked at some of the businesses that had given it a go and they seemed to be quite successful. So, I thought it was a great idea, partly because it kind of validates that your business is wanted.

“I think there is a big insecurity when these things happen. You think ‘oh my Lord, am I going to go out of business?’ and especially one like this where you’re touching people in close contact.

“I had no idea as to how much fear there was; whether anybody would ever want to be touched by anyone ever again. So, for me, it was an opportunity to test this and see how people felt about coming back to using our service. Plus, it gave me something to focus on and get the team involved in.

“I set myself a target of £6,000 with the intention to use that money to buy all the PPE and make modifications to the business.”

In exchange for financial support, donors to Health in Motion’s Pay It Forward crowd funder were able to purchase treatment vouchers at a special price as a thank you for the support.

‘I got a really lovely response’

Fortunately, Lola’s test paid off and Health in Motion was able to secure its much-needed funding.

“Something deep down in me made me feel that people would want to reach out and help, and especially in this community,” said Lola. “Because if this little High Street dies then it has a bearing on the community and how it comes together.

“I got a really lovely response from people, and lots of people said ‘this is an amazing idea, anything we can do to help and keep our favorite businesses alive, we’ll do it’.”

With the initiative’s success, Lola is keen to help other businesses give it a go. She said: “I think people get a gut wrenching feel about reaching out for help in that way. Culturally, it’s just not what we do. But I think if the situation was reversed and I was the one at home, still earning, still working, it would be in the back of my mind that I need to spend some money in the local economy to keep it where you want it to be, to have it survive. I think there’s no harm in asking and if people say no, people say no.”

Lola is also keen to pay it forward in other ways too. She said: “I make a point of doing as much shopping as I can on this high street, for example buying things that I would have bought on the internet for Christmas presents this year. I feel that it is really important that we do support each other.”

With the funding in place, the clinic was able to acquire PPE and put procedures in place to reduce exposure by pre-screening patients, staggering sessions, strict adherence to hand hygiene, limiting waiting times, and increasing cleaning of the clinic.

Since reopening last May, Health in Motion has been flourishing and it has been able to take on more members of the team.

Lola said: “I felt that in having to rethink how we did business here and how we provide our service, that we could potentially improve our numbers which would pay for additional team needed as a bare minimum for infection control purposes.

“Amazingly, we’re now sort of back on track, earning similar to what we were earning last year [before the pandemic]. Just by making sure we’re more efficient with what we do.”

The practice has also benefited by being in a community, rather than central London, and has been able to shorten its working day because it no longer needs to accommodate commuters.

She said: “If we were a central London located business we’d be finished. But we’re out where people live and that has worked really well for us.”

Lola’s team has also seen an influx of patients because of the rapid shift to homeworking and other challenges that the pandemic has presented.

“Not many people have an ergonomic working space,” said Lola. “There are all sorts of weird and wonderful things people are doing at home, from sitting on beds, to sitting on bad chairs or bad-sized tables.

“People were coming in thick and fast, talking about crippling neck pain, back pain, or asking ‘how have I done this to myself?’ They are suddenly in a situation where they’re not doing any exercise and spend more time at their workstation because they haven’t got the commute, they haven’t had to go out for lunch, so people are actually spending more hours of the day working.

“There’s lots of adaptations you can make without buying anything. I believe in teaching people how to make easy adaptations because you can do them very quickly with whatever you have in the house at the moment and not everyone has the space for new office equipment.”

To find out more visit: Health in Motion Osteopaths Ealing

The Mayor of London Pay it Forward scheme is still available and offers 100% free fundraising to help businesses raise vital funds and stay afloat, rebuild and recover from COVID-19.  There is also a Back to Business Fund, where the Mayor will match every pound raised by a business up to a maximum of £5,000 – or 50% of their campaign target – to help them expand their operation online, invest in their future and adapt to safe, socially distant trading.

Read more in our series on local businesses in COVID-19