Home > How you can brighten February with music and film 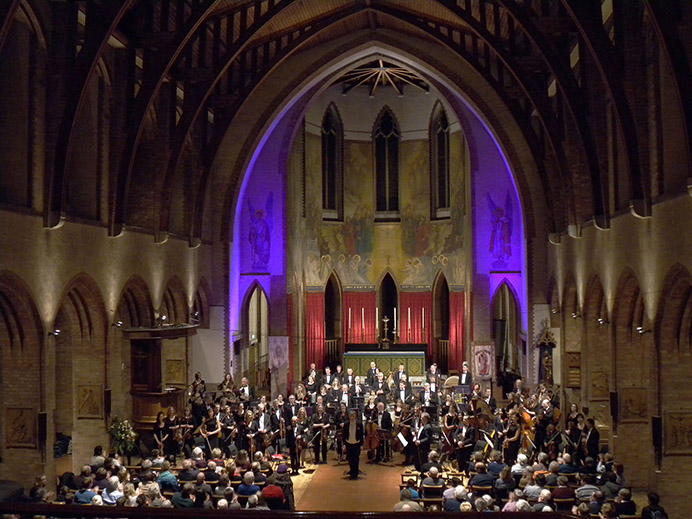 How you can brighten February with music and film

The Ealing Music and Film Festival is back soon for its seventh year of live performances, talks and screenings. And we have teamed up with the organisers to offer you the chance to win tickets to two of its main concerts.

So, this Valentine’s week (between 13-17 February), put the chocolates to one side and let the festival light up February’s dark days with a combination of music and film, and more – all highlighting the borough’s rich cultural history.

We spoke to Patrick Chapman, chair of the trust, who told us: “Where else locally can you enjoy a world-class programme of music and film – as well as support young up-and-coming artists?”

Read the interview to find out more about the festival and what you can expect this year; and then have a go at entering the competition for tickets, beneath.

Tell us about the festival. Lots of people will know all about it but some others may not know what kind of activities to expect

Patrick: As ‘we say on the tin’, the Ealing Music and Film Festival is a local charitable event that concentrates on Ealing’s excellence in music and film, our ‘Cultural Heart’. We aim to bring it to as wide an audience as possible through a mix of music – soul, jazz, classical and rock – coupled to a programme of film that centres on the latest work of local producers and directors. So, the programme typically includes concerts, film screenings, tours and talks – presented by world class and local performers, actors and scholars. It is a festival celebrating Ealing talent, sponsored by Ealing businesses and supporting Ealing’s up and coming artists through our charitable outreach and scholarships.

This year we are delighted to welcome back local resident and internationally renowned violinist Tasmin Little, who will play on St Valentine’s evening with the London Mozart Players in a suitably themed concert for this special day. We are also delighted to welcome the current BBC Young Musician of the Year, pianist Lauren Zhang, who will be playing with The Ealing Youth Orchestra with members of the London Mozart Players as part of our Charitable Outreach. On the film side, we are working for the first time with MetFilm School, the world-leading film, television and online media school based at Ealing Studios. This looks to me to be shaping up as an outstanding festival programme.

Any personal highlights this year that you’d like to pick out for us?

This will be our seventh festival programme and, as ever, our challenge is to reach out across the borough and brighten up the dark month of February; particularly given all the problems that are enveloping our country just now. This year, the mix of events – films and music – is better than before with excellent producers, directors, artists and performers. So, I see this mix as the personal highlight.

What led you to set the festival up?

Back in 2011 our patron Angie Bray suggested that we ought to find a way to celebrate our arts heritage and help our local residents and, especially, our local students, as well as get our local businesses ‘on the map’. We are a local independent charity, not connected with the council, aiming to make a local difference. And, so far, we have succeeded in increasing the level of charitable sponsorship and support to Ealing musicians and performers – last year this exceeded £12,000. The value of this to Ealing will be multiples of this amount.

Outside of the festival events themselves, the trust is involved in activities with local schools, isn’t it. Tell us more about that

As I mentioned earlier, our aim is to award scholarships and to inspire and encourage young performers across the borough. We have developed an outreach programme for primary schools, collaborating with professional musicians. We deliver half-day programmes that start with an introduction and demonstration of musical instruments, followed by interactive musical activities, centred on a musical creative workshop ending with an impromptu performance for teachers and parents. So far, we have delivered at least four workshops each year. Quite simply, these events are amazing.

Why is that local involvement important to you?

These days, everyone seems to look to themselves rather than lifting their eyes and looking around at the place we live and what it means. Ealing is special – trees, parks and open spaces, coupled to a music and film heritage second to none. But who really cares and does something about it? That’s why it is important.

Going back to this year’s events, what would you say to someone you bumped into if they asked you why they should get excited about it?

Where else locally can you enjoy a world-class programme of music and film – as well as support young up-and-coming artists?

Where could that person then go to find out more?

Check out our website for details of all our events and to purchase tickets: www.ealingmusicandfilmfestival.org

The Ealing Music and Film Festival Trust is offering two lucky winners a pair of tickets each – valid for one of two concerts: Either the London Mozart Players with Tasmin Little at University of West London on Thursday 14, February; or the West London Sinfonia at St Barnabas Church on Saturday, 16 February. Ticket values are 2x£25 and 2x£20 respectively. When entering the competition, you must state your choice of concert because one winner will be drawn for each pair of tickets and, if you answer the question correctly, you will be entered into the draw for the concert you stated a preference for.

To have a chance of being one of the two winners, you must answer the following question correctly and email it to aroundealing@ealing.gov.uk by the closing deadline of 11.59pm on Monday, 28 January 2019. To be included you must use the subject line: Festival competition. Please state your name, postal address and phone contact details – and of course, your choice of concert.

Question: What season of the year is being celebrated on Valentine’s Day in this year’s festival?

The winners will be drawn at random on 29 January and only the winners will be notified. They will then be contacted by Ealing Music and Film Festival Trust to arrange collection of their prize. No monetary alternative will be offered instead.