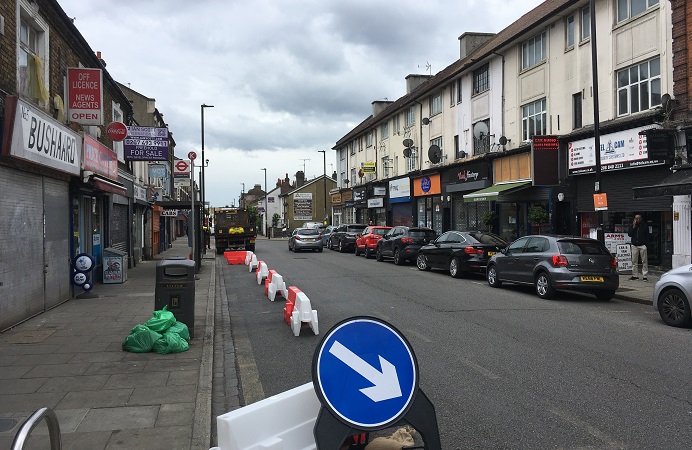 Ealing Council has secured more than £400,000 of funding from Transport for London (TfL) to introduce nine Low Traffic Neighbourhoods (LTNs) in locations across the borough.

An LTN is a group of residential streets, bordered by busy main roads where passing traffic from buses, lorries and non-local vehicles is discouraged and minimised.

It is about ensuring that every resident can drive onto their street and retain easy access, whilst making it much harder for others to drive straight through from one main road to another and treat the area as a rat-run.

The £400,000 of funding will also support the council’s ongoing measures to mark and widen footways and install barriers in busier spots to enable more people to walk, cycle and maintain social distancing.

Work has taken place in multiple locations in recent weeks, including at Himalaya Palace Shopping Centre and King Street in Southall, the Hanwell post office on the Uxbridge Road, Boston Road in Hanwell, Ealing Road in Northolt, and around Ealing Broadway.

Younger residents are being supported too, with 40 schools now benefitting from footway markings outside entrances and exits to help guide children and parents on where to stand to socially distance. A further 20 schools will also have footway markings installed in the coming weeks.

Julian Bell, leader of Ealing Council said: “To be able to secure this vital funding from TfL is hugely positive for the borough.

“We are introducing 9 LTNs across the borough to reduce traffic using quieter residential streets as rat-runs and to help support local people to increasingly make the switch to walking and cycling.

“Getting out of your car is also really good for your personal health and better for all of us as it helps to reduce air pollution and traffic congestion. During lockdown, traffic has reduced, and we’ve seen a significant reduction in harmful pollutants recorded in Ealing.

“We are facing a climate emergency and air quality is a huge health concern. It’s vital that we continue to invest in measures that make it safer, easier and more enjoyable to walk and cycle in Ealing instead of jumping in the car.”

New segregated cycle lanes are also being introduced across the borough, designed to run alongside the main lanes for general traffic. They are separated by cycle wands, plastic posts which help to clearly define the boundary to all road users. The lanes have also been widened in places.

The latest measures have also seen the installation of a protected cycle lane on the Uxbridge Road, between the North Circular and Ealing Common station, complete with reflective posts.

It is important that cyclists do everything possible to stay safe on local roads and plan their routes. British Cycling has produced a useful video offering safety guidance on switching lanes and you can plan a quiet route into Central London with Transport for London’s cycle map.

More information about the creation of the 9 LTNs will be available to residents in due course.