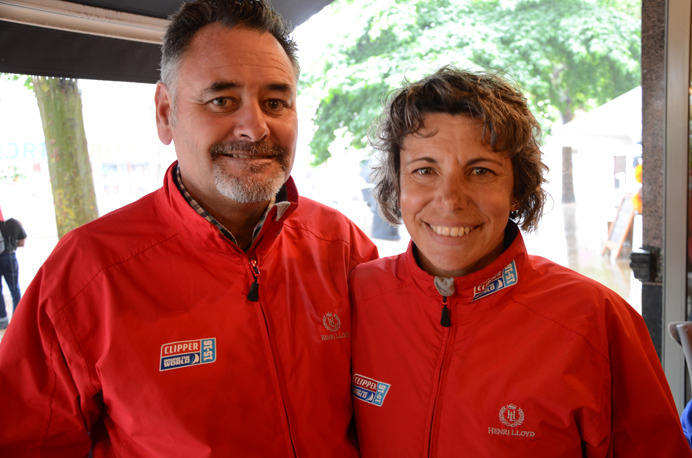 Life lessons on the open seas

“We hope we’ve inspired some of our pupils to follow their dreams,” said a pair of teachers who have returned to shore after a gruelling 11-month sea voyage circumnavigating the globe.

Katrina Boxall and Andy Kerrison used to teach at Northolt High School. A year ago, in August 2015, we ran a story on how they were about to embark on an epic sea journey for charity with the well-wishes of staff and pupils ringing in their ears. Katrina’s headteacher at the time, Gloria Lowe, called it a ‘noble adventure’ and said: “Katrina has chosen to leave a school she loves, and has made a huge impact in, to pursue a lifelong dream for a wonderful cause.”

The 2015-16 Clipper Round the World Yacht Race embarked from St Katherine’s Dock in London on a 40,000-mile contest across eight different ‘legs’, with pit-stops in ports along the way.

Katrina was to take the first leg across the Atlantic, from London to Rio; while Andy (who most recently taught at Ealing and Notting Hill High School before setting off) was to attempt to be part of a crew making it the whole way around the world – braving fierce storms, shatteringly powerful waves and relentless hard work for almost a year.

Here we were a year later…and I was intrigued to know more. I have been asked before: ‘Whatever happened to those teachers in that sea race?’ Well, it was time to find out. First of all, it was encouraging to discover they were both still in one piece, which is always a good start.

We met in Ealing during a downpour and joked that they should be used to getting wet – but London’s summer rain was nothing compared to the onslaught of weather conditions they had faced in their ocean-going odyssey to raise money for the Motor Neurone Disease Association. They had been inspired to take on the race in honour of friends who died from the disease.

Taking on the sea

The adventurous pair were on different boats for the Clipper race and Andy was team co-ordinator for the Garmin boat. He arrived back in London in July, feeling emotional, elated but exhausted.

On Andy’s team, an overall group of 61 took it in turns to crew the boat. At any one time there were between 14 and 22 people on board. Only 10 planned to stay on the boat for the entire journey. Of these, only five achieved it – one of whom was Andy.

“The worst parts were the best as well – so intense but also amazing and a challenge that we overcame,” said Andy. “In the northern Pacific we were hit with wind gusts of 113 knots. We were basically being knocked down by 60-70 foot waves – as high as a three-storey building.

“The front of the boat was damaged, the sails were damaged, the reinforced helm was turned 15 degrees by the wind and we had no guardrails left. It became an act of brute force to fight the wind.

“When we finally made it through and got to port in Seattle it took 10 days to fix the boat.

Attack on the senses

“I think I was naive going into it – in terms of just how much mental endurance and resilience would be needed. You are gradually worn down because even when you go into port you never really recover because then you are working on the boat and getting ready to leave again.

“And it is hard to explain the experience of the senses. The sound, for example; it’s horrendous. The smell, too; it is pretty pungent – a mix of diesel, sweat, and the damp mustiness of wet clothes in a confined space for a long time. You never really get rid of it, even after a deep clean in port.”

Despite having to overcome the wild conditions and mental tests, the boat came in fourth overall in the race – an impressive achievement.

Getting back to normal

But after almost a year away, what is it like readjusting to normal life?

“Andy is still waking up in the middle of the night – and also wants to eat all the time,” laughed Katrina.

“An inordinate amount of food,” agreed Andy, smiling. “Because you eat so much on board the boat because you are constantly burning up so many calories and need to replenish them. I eat fast too – because it is what I’ve become used to. It is hard to remember how to eat slowly.

“In fact, using a knife and fork is hard as well – I have so little dexterity in my fingers after so long away and it is pretty weird.

“You need to remember I’ve been living life at a 45 degree angle – basic things like cooking and going to the toilet are so hard to do. And it would take up to 30 minutes to get dressed – time you had to take out of your sleeping time to make sure you didn’t miss your watch on deck.”

Katrina interjected: “That is cardinal sin number one in the crew: You are never late for your watch. Because someone has been working hard for hours and need their break.”

Once Katrina had finished the first leg of the journey she went to be with relatives in New Zealand and stayed in touch with Andy via Skype and occasional emails – as well as going to see him in port at Sydney, Hobart and Seattle.

“I actually wasn’t worried about Andy at all,” said Katrina. “I’d been part of the crews and understood the risks and the training we had all done.”
Katrina and Andy have raised more than £2,000 via a Just Giving page online and you can still donate. Other donations given separately have boosted the total further.

Andy, although previously a teacher at Northolt High, had also taught at Ealing and Notting Hill High before undertaking the race. Both schools helped raise money for the pair’s charity drive before they set off – and also supported them during the race.

Indeed, the pair said they were incredibly grateful for the help they received from their ex-colleagues, former pupils and also their friends in Ealing – and also Katrina’s fellow choristers in Questor’s Choir, who donated the funds from their December performance to the Motor Neurone Disease in honour of Andy and Katrina – which took the total closer to £3,000 although it does not show on their Just Giving page.

“Both our schools were amazingly supportive before, during and after the race,” said Andy. “One of the girls happened to be in Cape Town and made sure she was there at the port when we arrived to hand me a card signed by all the pupils. That was really special. So I was not out of sight, out of mind. In fact a lot of friends and family knew more about what was happening in the race than I did because they were checking the progress on the online race viewer all the time.”

Katrina added: “One member of the choir, Steve, rowed down the Thames following my boat when we were setting off from London and called out to me on the deck. I had no idea he was going to do it. It was so nice.”

‘Have a dream and hold on to it’

They hope to give something back to their former schools by helping to inspire their students to seize opportunities that come their way and to be adventurous in pursuit of dreams and ambitions.

“Teaching is an opportunity to open children’s minds,” said Katrina. “And it is a way of giving back to people in the same way that others inspired us.”

Andy agreed, and said: “Our message to our former pupils is that having a dream and holding on to it means that it can come true. I’m an ordinary bloke who has done something not everyone gets an opportunity to do. I was utterly determined to make it through – in fact I said you’d have to drag me off the ship in a box before I quit.”

Katrina continued: “Returning to teaching, it will be a powerful new tool in our toolbox. As teachers we have always wanted to use our experiences for role modelling and this was Andy’s dream coming true.”

“Yes,” agreed Andy. “We can tell them that if they are tenacious and go after their dream, rather than saying it is too hard, it will eventually happen.”

“A lot of us on the trip have also learned how little you need in life to make you happy,” Katrina added. “You acquire all this ‘stuff’ in life but this experience makes you realise what really matters. You don’t actually need that much to be happy”