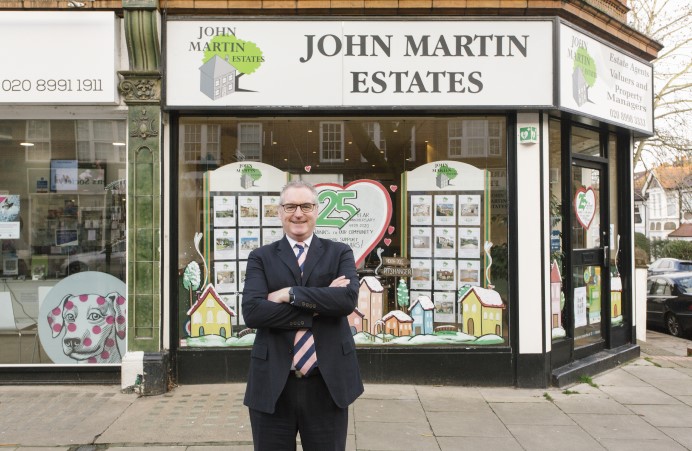 It is no secret that high streets across the country have been severely impacted by the coronavirus pandemic. In Ealing, the High Streets Taskforce has been working to find ways to support local businesses to survive – and prepare to bounce back.

John opened his business 25 years ago and got involved in the community from the outset, such as the annual Light up the Lane Christmas event founded by the traders. However, in 2010 trade on the lane began to see a decline with long-term TfL roadworks, making it far harder for shoppers to visit and park their cars.

“The roadworks lasted for 26 weeks and vacancy rates rose to 25%,” said John. “We described the lane as ‘having tumbleweed’ due to the drop in footfall as access to the Lane was so restricted; people just went elsewhere. It was a worrying time for all traders.”

As a result, the PVTA was established to help to deal with various issues concerning the Lane.

John said: “The first thing that we did was the launch of the Love Pitshanger campaign,  producing cards, bookmarks and bags for sale as a way of letting people know we were there and open for business and to encourage them back to shop on the lane. We also involved the local print media to help publicise the initiative.

“After this, we researched which businesses residents and visitors wanted to see on the lane and actively encouraged new businesses to open – and with the reduction of vacant units, the footfall increased.

So, the group decided to enter – and later won – the London category in the 2015 Great British High Street Awards.

What makes a good high street?

With this expertise behind him, John believes there are several elements that come together to make a successful high street.

“The high street needs to be clean and tidy with a good selection of businesses – it has to be somewhere that people want to visit,” he said. “It is important that the local community buys into what they have and supports it.

“It is important to work with the various teams at the local council to ensure that matters are addressed as they need to be, including refuse and recycling collection issues, fly-tipping and any new initiatives.”

“It also pays to be pro-active, as well as reactive, and to never be afraid to get your hands dirty,” he added. “Sweeping the leaves, picking up rubbish and generally helping to make the place look attractive.”

John believed it is also important to know what is going on in the area on a daily basis, with roadworks, filming and other activities, and to ensure both traders and residents are aware.

Coping with the pandemic

Even with support, the traders in Pitshanger Lane have not been unscathed by the impact of coronavirus pandemic.

“After the first lockdown it was important that the Lane reopened safely so that everyone had the confidence to return to their usual pre-lockdown visits,” John said. “That is where the posters to show we were ‘open for business’ and the pavement distance markers, paid for out of the Reopening High Streets Safely Fund, were so important.

“Traders made sure that they had the necessary PPE and sanitising stations and complied with social distancing and track and trace measures and, on the introduction of face coverings, we made sure that everyone complied. If people see the businesses doing the right thing, they are more likely to follow suit.”

‘The lifeblood of your community’

So, what is the secret to ensuring that Ealing’s high streets survive and begin to thrive again?

“It’s simple – shop local,” said John. “These businesses are the lifeblood of your community. Independent businesses genuinely care about their individual customers and clients and there is a level of personal service which you cannot get from a larger store.”

As John pointed out, innovation and resilience have been key to success for traders in Pitshanger Lane. Two plucky businesses offer up the perfect examples of this. Local osteopaths Health in Motion used the Mayor of London’s crowdfunding campaign to get back to business, while Innovation Dance Studio insisted ‘the show must go on’ and became the dance version of PE with Joe. Read their stories below:

Councillor Kamaljit Dhindsa, Ealing Council’s cabinet member for business and community services, said: “Pitshanger Lane is a wonderful example of what can be achieved when businesses work together to develop their community. With determination, fresh ideas, and the support of the high street task force and our local communities, we can rebuild our high streets for the better following the pandemic.”