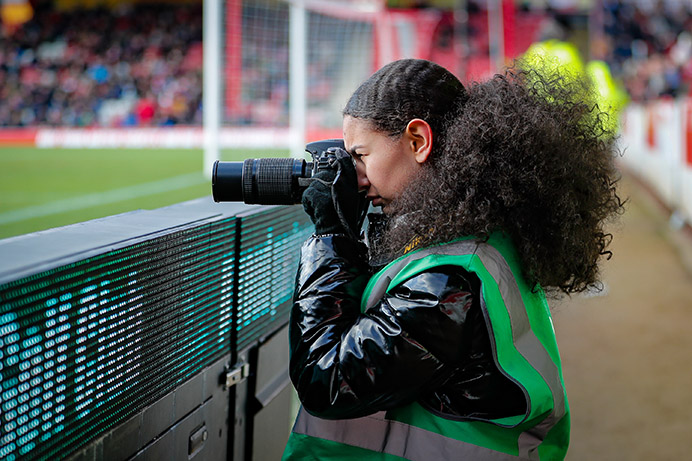 From the press box to the football pitch, 10 children – from Brentford FC Community Sports Trust’s community projects – went behind scenes and joined matchday staff to learn the ropes on Saturday (2 February).

Mia Lloyd from Ealing helped capture the elation of the Brentford players’ goals as she took on the role of club photographer – as you can see in the picture above.

Mia, 13, benefits from the trust’s Young Carers project, which provides much-needed respite to young people across the borough in partnership with Ealing Council. She shadowed the club’s matchday photography team, pitch-side, taking pictures to appear on brentfordfc.com

Speaking about the match, she said: “I really enjoy photography – it has allowed me to express myself and I’m honoured to be able to photograph a team that I have supported since I was little. It was only through the trust’s Young Carers Project I have been able to develop my passion for photography. The project has helped build my confidence and helped me share experiences with other young carers in the same situation as me.”

The match is part of Brentford FC’s ongoing commitment to community initiatives. For every ticket bought at the game, £1 was donated to Brentford FC Community Sports Trust – helping people like Mia.

All the children involved benefit from the trust’s community projects, which includes supporting young carers, children with autism and young people in the local area.

“The event on Saturday not only proved the club’s commitment to the community, but it also showcased the impact the Community Sports Trust has on young people across west London.”