Home > Get moving and take on the Ealing Mile 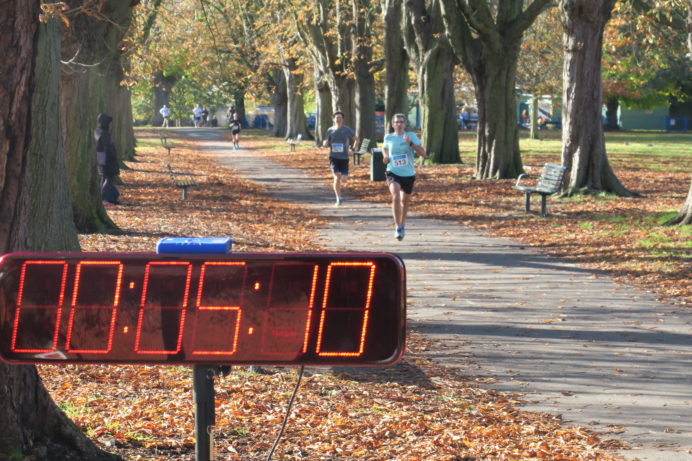 Get moving and take on the Ealing Mile

The Ealing Mile takes place every month and is a great way to Get Moving in your lunch hour, regardless of your fitness levels.

It takes place on the first Friday of each month at 12.30pm at Lammas Park in Ealing and attracts serious runners and casual joggers alike. And everyone is welcome.

It is a fully licensed and officially measured UK Athletics (UKA) course. This means that race times are officially recorded and updated to UKA’s website called Power of 10 and the results feature in the Run Britain’s UK Road Rankings – important for any serious runners keen to take part.

But it is not just for keen runners. The organiser, Ealing Half Marathon Legacy Community Interest Company (EHM Legacy), is the community arm of the nationally-recognised and award-winning Ealing Half Marathon. And it encourages everyone to come along, whether they run, jog or walk the course. In fact, it was originally set up as a short, easy distance to get people active and outdoors at lunchtime and enjoy the park.

Ealing Mile regular David Whitelam, of Ealing, said: “I ran the very first Ealing Mile back in 2013 and, although exhilarating, I do remember setting off far too quickly which made for a pretty painful second half. Not bad enough to put me off though, and I’ve learned to pace myself better on the many times I’ve returned. It’s always a fun and very friendly event and I’ve run round with my son a few times too. It’s a great way of seeing how fitness can progress (and decline) and I’m already looking forward to the next one.”

David is one of a number of regulars. Indeed, the race is a popular lunchtime break for both home-workers and people who work locally. There is also a regular contingent of people who are around during the day for other reasons, such as being carers or retired.

‘Manageable for almost anyone’

Kelvin Walker, director of EHM Legacy and also the founder of Ealing Half Marathon, said: “The Ealing Mile provides a great incentive to get out and be active in the middle of the day. We have both walkers and runners taking part, including some who started as walkers but have progressed to running the whole course. The mile distance is manageable for almost anyone to take on and it’s inspiring to see people enjoying taking part.”

Why not give it a try?

The cost for the Ealing Mile is £5 per race, £15 for a six-month pass or £25 for a 12-month pass. The six and 12 month options give you entry to as many mile races as you like during your membership. It is best to register online beforehand.

EHM Legacy, which works to increase participation in sport and local volunteering, is paying for a new drinking fountain to be installed in Lammas Park near the start and finish line of the Ealing Mile – and also of the Ealing Half Marathon. Working in partnership with Ealing Council, which owns the park, EHM Legacy will unveil the fountain in early 2019 to tie-in to the 100th Ealing Mile race. Keep an eye on ealingnewsextra.co.uk for more information.