Home > Ealing Half Marathon back in the borough this Sunday 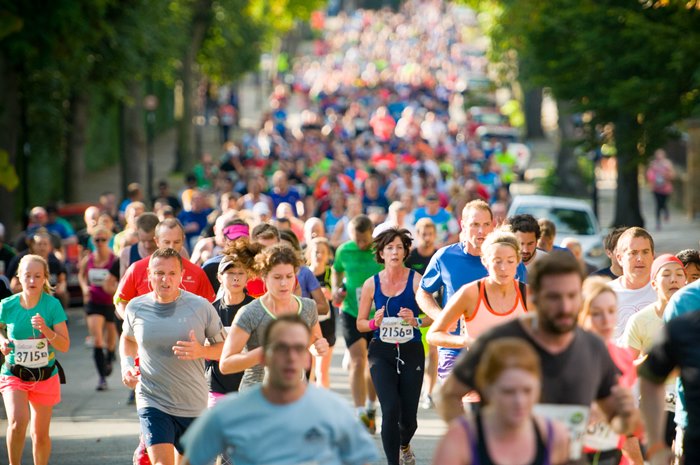 Ealing Half Marathon back in the borough this Sunday

Sunday 24 September sees the famous Ealing Half Marathon return to the borough’s streets and with less than a week to go, the 7,000-odd runners taking part are sure to be busy preparing for the big day.

The Half Marathon is an independent social enterprise endorsed by Ealing Council and is now in its sixth year. It has been voted the UK’s best half marathon for the previous three years.

Many local people will know all about the Ealing Half, whether they have run it themselves, know a colleague taking on the challenge, or have donated to a charity represented by someone taking part.

Allie Collins is one such runner preparing for the big day on Sunday (24 Sep). She explains: “I live in Pitshanger and have been a member of Ealing Eagles Running Club for just over six years. I’ve been involved with the Ealing Half Marathon since it began in 2012 – I’ve volunteered as a marshal three times, and this year’s race will be the third one I’ve run.

“I’m just aiming to enjoy running with friends and soaking up the atmosphere. I love the Ealing Half – I’ve lived in the borough for nearly 10 years now and I really believe it has made the area a better place to live.

“There’s a fantastic sense of community and it’s so inspiring to see the number of people who have discovered running and become fitter and healthier as a direct result of the amazing work the Ealing Half team do. I can’t wait for 24 September.”

The community spirit that the Ealing Half helps build every year is something that fellow runner and Ealing Eagles member Matthew Kay is also keen to point out. He added: “Although I live in Hounslow I’m very much an adopted resident here. This event epitomises Ealing as a borough. It has a great community feel, welcoming individuals from diverse backgrounds and come race day you will see how it plays out.”

“This is when the borough stops and cheers for the collective stampede of runners that will pound the streets of Ealing for what many individuals will have spent their summer training for.”

In training for the Ealing Half, local headteacher Nicola Forster has also seen the benefits that running can have on health and fitness. She explained: “My newfound love for running seems to have weaved its way into a lot of aspects of my life. I am head at North Primary in Southall and there, every child runs a mile a day. The Ealing Half Marathon has had such a good influence on the health of the locals, including children, we are so lucky to have it.

“I haven’t always been a runner, but for the most of my life, I have lived in Ealing. As I run through the local area, training with some friends, I like to point out various places from my childhood – of course, they don’t find this irritating at all!”

Councillor Bassam Mahfouz, the council’s cabinet member for transport, environment and leisure said: “It’s been fantastic to see this local event go from strength to strength in just six years and win numerous awards. It’s an incredible atmosphere, with all the runners and volunteers, alongside the thousands of people who turn out to watch. I took up running this year and have enjoyed it so much I’ve signed up for the Ealing Half myself and am really looking forward to the challenge.

“I appreciate that some people will be affected by the road closures in place for the safety of all, and would like to thank residents for their understanding. I encourage local people to check local road closures and bus diversions to avoid any inconvenience on the day.”

The 13.1 mile course will be run in a single lap and kicks off in Lammas Park at 9am. It will take in parts of Central Ealing, Montpelier, Pitshanger, West Ealing, Hanwell and St Stephens before returning to Lammas Park via the Uxbridge Road.

To avoid any inconvenience on the day you can check Transport for London and the Ealing Half Marathon route map for more information about road closures and bus diversions.