Home > Ealing Half Marathon and the school run 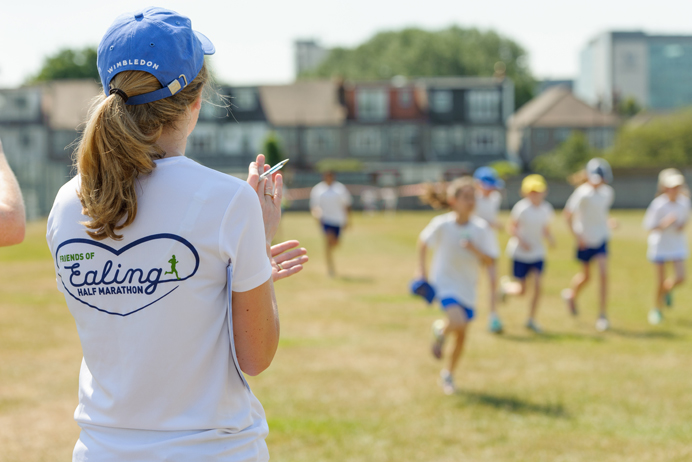 Ealing Half Marathon and the school run

Ealing Half Marathon consistently picks up awards and has become a firm fixture of local life each September; but did you know about the enormous amount of work the team behind the event does to inspire thousands of local schoolchildren to stay active and healthy?

The sixth annual Ealing Half Marathon will take place on Sunday, 24 September with an expected 7,000 runners pounding the course; and its children’s ‘mini mile’ will take place the day before, for an impressive number of youngsters aged between six and 16 years old. Thousands of people line the route to cheer the runners on, while 700 volunteers help out, so it is a real community weekend.

Both races start and finish in Lammas Park; and the main event features a 13.1-mile route on closed roads through the leafy streets and parks of central Ealing and the surrounding areas.

It proved a big success and has grown year-on-year. So much so, that the not-for-profit Ealing Half Marathon CIC (community interest company) was set up to organise and manage it. Such is its success, and its growing reputation as a top event, that Ealing won gold in ‘Best Half Marathon in the UK’ at the Running Awards in 2014, 2015 and 2016, and came second to win ‘silver’ in 2017.

TAKING THE MESSAGE TO SCHOOLS

More than 5,000 pupils have benefited from talks by the team at schools around the borough – and many have been inspired to get involved in running, through taking part in junior ‘parkrun’ events, joining the junior section of Ealing Eagles running club, or running in the annual mini mile at the half marathon. In fact, participation in the mini mile has tripled since last year, and will include 1,500 children.

Two primary schools in Ealing have even set up running clubs themselves with the help of the half marathon team – Montpelier and Mount Carmel.

Recently, the team also organised a ‘marathon’ at Mount Carmel with more than 450 pupils working together to run a complete marathon distance between them.

Read a Mount Carmel mum’s inspiring story here, after she herself was inspired by the half marathon to leap off the sofa and take up running…and even become a  coach.

‘IT IS SO IMPORTANT TO BE HEALTHY AND ACTIVE’

Sandra Courtney, Ealing Half Marathon director, said: “One of the main aims of Ealing Half Marathon CIC is simply to organise and manage the race and event, but we also raise a surplus of funds which is then ploughed back into community projects. We have helped set up various runs and running clubs across the borough. We have also raised more than £1million for various charities.

“A part of this work is what we do with schools and helping to educate children on the physical and mental benefits of exercise. It helps with academic attainment and concentration levels, not just the more obvious effects on wellbeing and overall health.

“At the school presentations we talk about why it is so important to be healthy and active. And it is not just about running – they can do all sorts of activities, even walking the dog. It is great seeing how engaged the whole school gets – parents, teachers and children. We started out by approaching schools, but now they approach us and we try to visit as many schools in the borough as we can.

“Last year we introduced the Schools Challenge for the first time, with several schools putting together teams consisting of parents, teachers and governors to run the half marathon to raise thousands of pounds for their schools and leading by example by getting fit and training for the race.”

North Ealing Primary was one of those to rise to the Schools Challenge in 2016 and it raised money to put towards a new ICT unit.

Headteacher at North Ealing, Sally Flowers, said: “It’s great that we have a community event like the Ealing Half Marathon on our doorstep. I was delighted to play my part in raising school funds whilst getting fitter. The whole day was a fantastic experience and it was great to see the school come together both before and on the day.”

Council leader Julian Bell said: “Not only is the Ealing Half Marathon a terrific community event, it also does a lot of good work in the local area – not least in our helping to reinforce our schools’ efforts to teach our children good habits at a young age. If you’re not one of the thousands taking part in this year’s half marathon, I encourage you to take up opportunities to volunteer and help out on race day – or just go along to watch and soak up the atmosphere.”

There may be some race places left for this year’s half marathon on 24 September – you can check at www.ealinghalfmarathon.com

But you do not have to run to enjoy the day because the event always welcomes volunteers – who, in return, get breakfast and a free race place for the next year’s event. You can read more here.