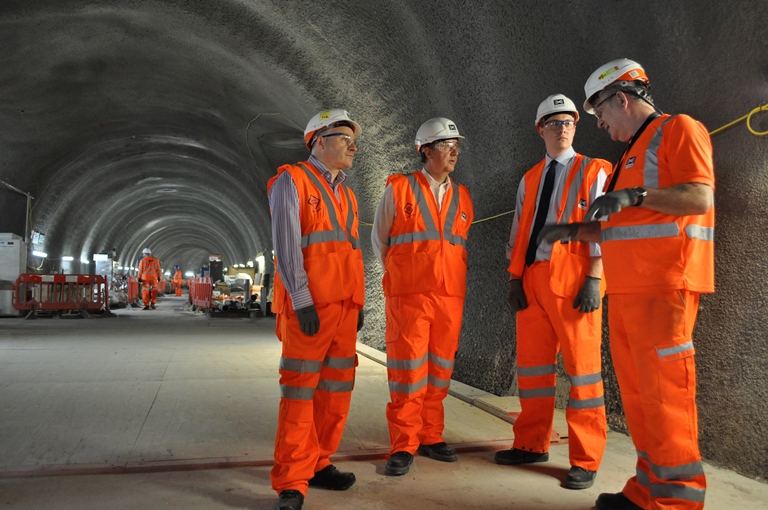 Going underground in the Crossrail tunnels

The leader of Ealing Council, Councillor Julian Bell, visited Crossrail tunnels under Tottenham Court Road on Tuesday, 13 September. He saw for himself how work is progressing on Europe’s largest construction project.

But Crossrail is  more than a construction project; it is also a massive regeneration opportunity. Train will stop at five stations in the borough, Ealing Council is working closely with Crossrail to make sure that residents benefit as much as possible from the improvements.

Five Crossrail stations in the borough

The route that Crossrail trains will travel on is called the Elizabeth line and the five Ealing stations on the line are Southall, Hanwell, West Ealing, Ealing Broadway and Acton Main Line.

The first trains will start running next year between Shenfield in Essex and Liverpool Street. The section from Heathrow to Paddington will not open until May 2018.

When Crossrail is fully operational at the end of 2019, journey times between Southall and Canary Wharf will be cut to just 31 minutes and from Ealing Broadway to Paddington to just 7 minutes.

Crossrail will extend from Reading and Heathrow in the west, through to the West End, Liverpool Street, Canary Wharf and Abbey Wood and Shenfield in the east. It will connect the capital’s residential, business and leisure districts making it easier for its 200 million annual passengers to travel and get more out of London. The full route can be found at on the Crossrail website.

Councillor Bell said: “Ealing is fortunate to have five Elizabeth line stations. Instead of being known as ‘the end of the central line’, Ealing will be just minutes away from central London making it incredibly accessible and linked in to the rest of the city. This is good news for commuters and also makes the borough very attractive for businesses, because the quick connections will make travel easier for customers and employees. The areas around these stations are already feeling the Crossrail effect and will become development hotspots, bringing new jobs and opportunities to our residents.

“The scale of the project is breath taking. The length of the tunnels alone is 26 miles and when it’s finished the whole route will stretch for 72 miles from east to west. It feels like it has been a long time coming and I’m excited to see first-hand how close we are to seeing the line come in to service.”

The five stations are all receiving an upgrade to ensure they are fit for purpose and can cope with increased passenger numbers, but the biggest change is to Ealing Broadway station which is having a comprehensive redesign and change to its façade.

Wheelchair users, cyclists and those with buggies and heavy luggage will find transit through the station much easier with a new ticket hall and lifts to the platforms. There will also be new retail space and an improved open entrance creating a spacious interchange with local transport links.

Go to the Crossrail website for more information. Detailed information about the upgrade to the five Ealing stations can be found on Ealing Council’s website.