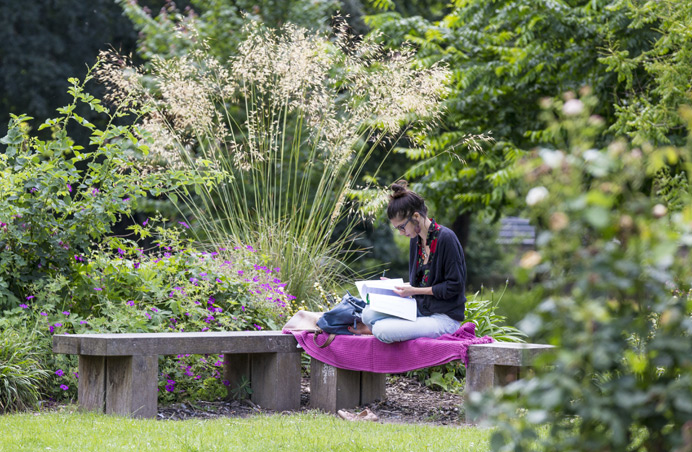 Ealing has long been called ‘queen of the suburbs’ – not least because of its tree-lined streets and many parks. It is also, however, home to four significant nature conservation sites and some of London’s finest old meadows.

These precious parts of our borough are all cared for by Ealing Council’s team park rangers and volunteers. Could you help?

James Morton is one of the borough’s seven rangers, and personally looks after around 20 parks.

He said: “A large strand of work is nature conservation – managing and improving parks as habitat.
I also spend a lot of time working on interaction between communities and open space. We’ve been doing some great project work in partnership with residents recently and it’s enormously satisfying when people stop me on my bike to tell me about the positive changes they have noticed.”

You can read a longer chat we had with James here.

The park rangers run task days when volunteers can come along and work on a current conservation project. They regularly take place on Tuesdays (although there may be occasional weekend workdays) and tasks include woodland or meadow management, pond care, fencing or footpath work, hedge planting or tree planting.

Rangers also organise volunteer days up and down the River Brent, clearing rubbish and undertaking conservation projects to benefit wildlife along the river.

It is a great opportunity to learn new skills, meet new friends, keep fit, enjoy the great outdoors and do something positive to help your local environment.

Email parks@ealing.gov.uk if you are interested in finding out more.

The many parks and spaces have created a mosaic of different habitats, providing a home to a wide range of bird, insect, mammal and amphibious species. There are also lots of different wildflowers and hay meadows throughout the park.

The park in Perivale is the largest single nature conservation site in Ealing.

With beautiful areas of ancient woodland, grassland, ponds and hedgerows, the park provides an opportunity to experience nature up close. The park is separated into three distinct sections: Horsenden East is the highest point in Ealing offering amazing views from the summit, which is 84 metres above sea level. Horsenden West boasts a mosaic of wildfl ower meadows, hedgerows and ponds. The third part, Paradise Fields, is a peaceful haven of reed beds and lagoons.

This is a wet meadow with more than 20 grass species and 10 flowering plant species among the diverse wild growth.

The Northolt and Greenford Countryside Park has some of the borough’s best walking and cycle routes and consists of a number of smaller parks, playing fields and countryside. It forms a more or less continuous belt of green open space, much of which is extremely valuable for nature conservation.

The Greenford lagoons and birch wood provide a great refuge for a wide range of wildlife species in its many ponds, wetlands, woodlands, meadows and scrub.

The Marnham Fields and Smiths Farm Open Space offer much larger areas of meadow and scrub. They are on either side of the Grand Union Canal and are linked by a traditional wooden footbridge constructed out of green oak and decorated with a distinctive ‘Green Man’ carving. More than 2,000 trees have been planted to increase the diversity of wildlife and attract new birds and insects to this area, which was once a landfill site.

Rectory Park has a range of sports facilities and children’s playgrounds, while Northala Fields is a unique park with its four distinctive grass mounds running along the south of the A40. It has established wildlife habitats, including ponds and fishing lakes and wildflower meadows.