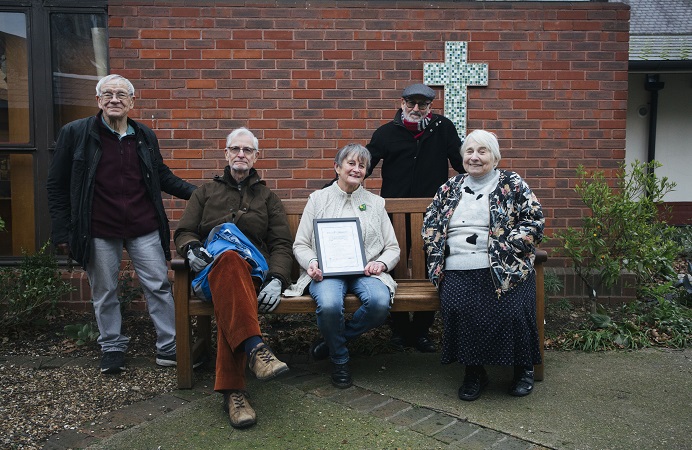 ‘Everywhere, I have seen climate change’

Across the borough, local people are stepping up to take on climate change and help their communities move towards a greener future.

These ‘climate leaders’, as they are known, are residents, business owners and community leaders taking practical steps to be more environmentally friendly on a local level. Ealing Council has so far named 14 climate leaders, with the potential for many more in the future.

One of these is Sue Charlton, of St Stephen’s Church in Ealing. She leads a growing number of church campaigns and causes where climate change impacts communities both locally and abroad.

Sue said: “I’ve been a member of the church since 1970, and particularly active at St Stephen’s since my retirement in 2010.

“I’ve always had a love of nature here in the UK and also when visiting Africa, Nicaragua, Iceland and the Himalayas. Everywhere, I have seen the effects of climate change in such a short space of time – it is so obvious unless you have your eyes closed.

“It is nice to be recognised as a climate leader, but it is a team effort here at St Stephen’s. We are trying to do as much as we can, working with charities on climate change issues and supporting the Wolf Fields nature reserve in Southall.”

Sue and her colleagues at the church are registered with the Eco Church scheme – an initiative involving more than 4,000 churches. It focuses on five main areas of church and personal life to promote green living.

Sue explained: “It is about encouraging us all to switch to renewable energy, to pray for and teach about caring for Creation; and sharing practical tips – things like reducing car use, reusing and recycling, using peat free compost and feeding birds – things that everyone can work towards.

“As a church, we want to make sure we are as green as possible and currently hold the Silver Award for the Eco Church scheme – we are now working towards Gold.”

There are currently 13 climate leaders working across the borough on a multitude of different projects and initiatives.

Working with climate leaders and building partnerships with the local community is one part of Ealing Council’s strategy, which is tackling the climate crisis at a local level and securing positive change for the borough’s residents.

So far, the council has delivered 15 School Streets, making it safer and easier for children to walk, cycle or scoot to school, and installed around 300 electric vehicle charging points so far.

New cycling lanes have been introduced in locations, including various points along Uxbridge Road, as well as a new bus lane along this vital east-west route through the borough. More measures to support cyclists are planned for other areas in the future. A borough-wide speed limit of 20 miles per hour has also been introduced.

A new food waste recycling service for residents living in blocks of flats has been piloted and its first phase, communal food waste bins have been installed, giving access to recycling to almost a thousand flats.

Around 37,000 new trees and saplings have been planted in the borough since 2018 as part of the council’s biodiversity action plan.

The independent organisation Climate Action UK has ranked the council’s ambitious strategy in the top 10% of responses to climate crisis by local authorities surveyed and fourth placed in London.

Partnership with the community ‘proving vital’

Councillor Deidre Costigan, the council’s cabinet member for climate action, said: “I’d like to thank all our climate leaders for their great work.

“These local people are taking the lead to cut carbon emissions and make the borough a more environmentally friendly place and we will do everything possible to support them.

“Tackling climate emergency is at the forefront of the council’s commitment to residents. Whether it is retrofitting council homes, expanding our cycle network or planting 37,000 trees, the action set out in our ambitious climate strategy is in place to make a difference.

“We cannot do it alone and an ongoing partnership with residents and community organisations is proving vital. That is why it is hugely encouraging to see so many climate leaders doing great work across the borough and making a difference on a local level.

“We know there is so much more to do to achieve net zero emissions by 2030 but we also need support from government. The hard work is only just beginning as we implement these changes, which aim to not only tackle the dire threat of climate catastrophe but secure a better future for our residents.”

You can find out more about the climate action strategy on the council’s website and learn about terms such as ‘net zero’ and carbon neutral via this explainer article.