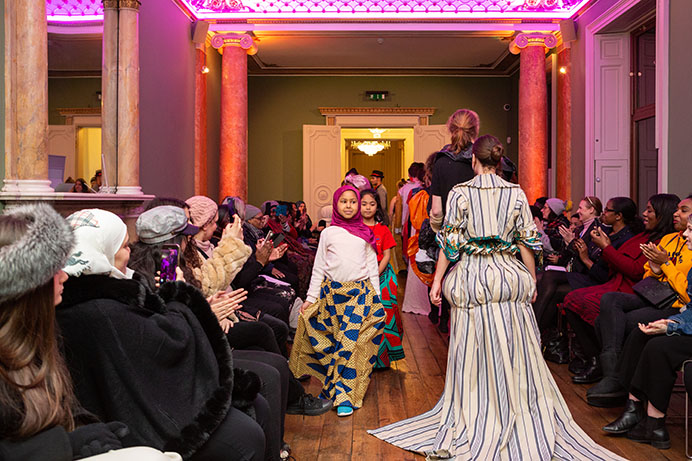 A free fashion exhibition at Gunnersbury Park Museum runs for another week – and gives you the chance to see some stunning Georgian-inspired clothing created by local young people. Some of which were skilfully made from old curtains, rubbish sacks and other ‘upcycled’ materials.

Two GCSE textiles classes from Ellen Wilkinson School for Girls worked on a fashion project with designer, sewing tutor and stylist, Karen Arthur. Inspired by Gunnersbury Park Museum’s collection of historic costume, the students researched styles from the Georgian period to create their own costume pieces.

However, the designs may have been inspired by Georgian fashion, but they did not use popular Georgian materials such as cotton, silk and lace. Instead, the students’ brief was to make use of recyclable materials – and they set to work with, among other things: A set of vintage curtains, old denim, fabric remnants, coffee pods, hessian coffee sacks, bright orange Sainsbury’s shopping bags, bubble wrap and even black rubbish bags.

Precision stitching, sewing and embroidery were involved as they followed Georgian patterns such as puffed sleeves, long, wide skirts and stiff stomachers.

It you take a close look you will see 18th Century style sleeves which look like silk; a piece of sack cloth cut to look like lace; a full skirt with tight waste-band giving a distinct summery feel; patch-work chinos and a stomacher made from discarded coffee pods. As well as being impressed by the costumes it might inspire you to try ‘up-cycling’ your own clothes.

Meanwhile, children from community group Descendants also got to work with the same fashion designer to create Georgian-style costumes from African-themed fabrics.

Descendants is an arts-focused educational project aimed at young people and children aged between four and 18 years and primarily, though not exclusively, of African and Caribbean descent. It is one of the mayor of Ealing’s annual official charities.

A special fashion show was held at Gunnersbury Park Museum to showcase the work from the two groups.

Louise Fraser, textiles teacher at Ellen Wilkinson School for Girls, said: “I am incredibly proud of our students. They have worked so hard to create their designs and it is a joy to see them delight in their work being shown off in this exciting fashion show with confident models.”

All of the costumes will be on display at Gunnersbury Park Museum until 27 February.