Home > How BMX club jumped into a winning position 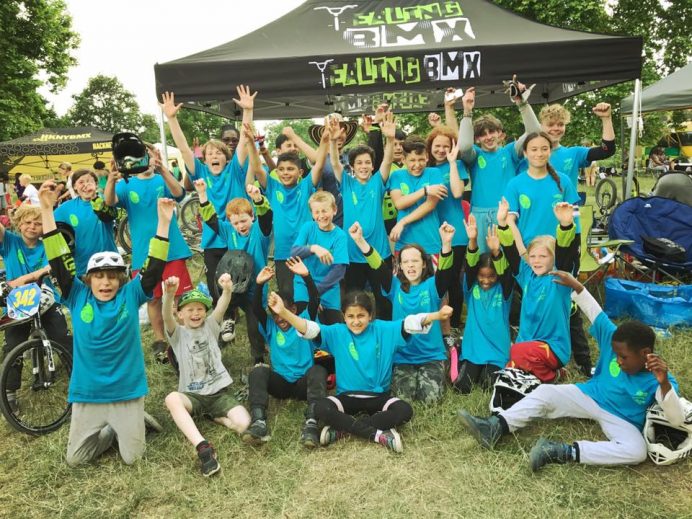 How BMX club jumped into a winning position

One of the winners of Ealing Council’s inaugural Ealing Sports Awards this month was Ealing BMX Club – which has grown from humble beginnings to become a thriving part of community life.

In 2014 the club had just 12 riders, limited equipment and no regular coach. Now it attracts more than 50 riders each week, has a coaching team, holds four sessions each Saturday for beginners through to experts and has a growing team of parent volunteers. It also runs week-day sessions for local schools.

In March this year, the club started a new session, Wingz BMX, for riders with additional needs. And it is this programme in particular that won the club its Inclusive and Active Award at the Ealing Sports Awards.

Chris Smith, the club secretary, said: “Grants from the council’s Perivale and Cleveland ward forums have helped the club get high quality equipment and build a buzzing, welcoming place where children can learn the skills of BMX, the discipline of the track, make friends and have fun. Wingz BMX is now a regular part of the Saturday programme and has proved a big success. It is really important to us to encourage as many children and young people as possible to get involved in the sport, and with our club. Wingz was set up with financial help and advice from the Rodney Fitzgerald Foundation and the sports charity Access Sport

“We are so pleased to have been recognised at the Ealing Sports Awards. It follows on from us being given a Clubmark Award from British Cycling for good and safe practice.

“It seems things are just going from strength to strength.

“Every year, the club co-ordinates the Ealing BMX squad for the London Youth Games and, this year, our riders did superbly well to come second in London. It was our best result so far – winning team silver medals as well as six silver and bronze medals for individual riders.

“The club is now working with the council to achieve a bigger track within the Gurnell leisure development. A larger track would mean riders can develop more racing skills and it would be a big step forward for the club.”

Riders, parents, ward councillors and supporters helped the club celebrate these successes at its third anniversary party in June.

If you are interested in getting involved or joining, or just want more information, email Ealingbmx@gmail.com or see the club’s Facebook page.