Home > Barges transport Waterside site from the past to the future 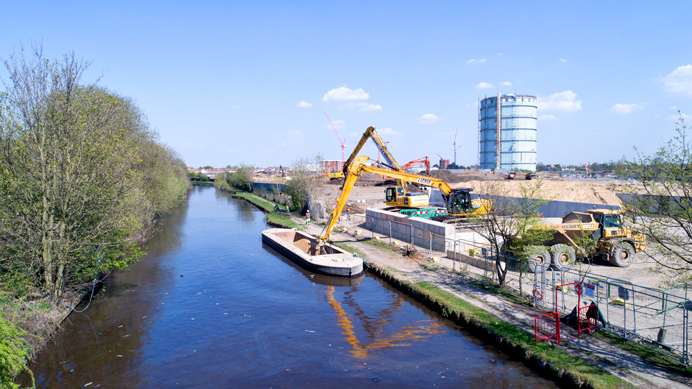 Barges transport Waterside site from the past to the future

In a link between past and present, barges are being used to carry deliveries down the Grand Union Canal to one of the capital’s largest regeneration projects, the 88-acre Southall Waterside.

Up to eight barges have been reaching the former gasworks site each day, with the aim of dramatically reducing the project’s impact on local roads. Each barge is capable of transporting up to 60 tonnes per trip, saving approximately 29,000 road miles per year –the equivalent to 35 round trips from London to Edinburgh. By doing so, the use of barges is also reducing the site’s carbon footprint, by taking a significant number of lorries off roads.

The canal will play a large part in the site’s future, too. As part of the Waterside project the public towpath is going to be restored, making it easier for walkers, runners and cyclists to use and enjoy the canalside.

Councillor Julian Bell, leader of Ealing Council, said: “It’s great to see that the canal is being used in this way, in order to minimise disruption for local people by keeping thousands of lorry journeys off our roads. The long-term benefits of the project will ultimately see the towpath restored, so that people can enjoy the kilometre of frontage that the Southall Waterside will deliver for public use.”

Working in partnership with the Canal and River Trust, Southall Waterside will also provide other cycle routes to alleviate the pressure on the Regents Canal Towpath as well as creating enhanced green space and a quieter and more leisurely route for the public.

Southall Waterside will create homes for nearly 10,000 people alongside a new business and leisure hub, community buildings, and more than 40 acres of public open space – including two new parks.

The former gasworks site has already required two years of infrastructure work and the remedying of around 52 acres (larger than Green Park) of contaminated land, using a ‘soil hospital’ the size of 12 Olympic swimming pools.

It is planned for the first new housing to be ready later this year, which comprise 186 affordable homes, 120 of which are designated for affordable rent with the remaining 66 for shared ownership.

Damian Leydon, operations director at Southall Waterside, said: “Utilising this part of the canal for Southall Waterside is taking the equivalent of 6,000 vehicles off local roads. We’ve been able to reduce the impact on the local community, and keep the delivery of homes on track. We’re also one step closer to creating a lasting legacy, which will have benefits for its future residents and local people, thanks to new walking and cycling routes for the area.”