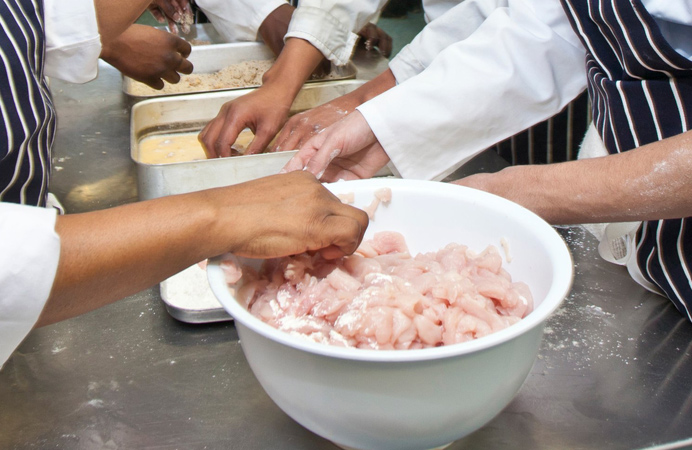 Working to keep your food safe

With more than 3,000 food premises located in the borough, one of the highest numbers in London, Ealing Council’s food safety team works extra hard to make sure what we put on our plates is safe and accurately labelled for consumption.

The team helps local food businesses to do what they need to do to comply with regulations and to grow as a business. This includes regular training courses it runs that, year on year, have helped to increase the number of businesses  considered ‘broadly compliant’ with food law – those with a food hygiene rating of three or more. The ratings go up to a total of five.

But, although most businesses welcome the help and do everything possible to comply with the law, there are some that do not. When this happens, the council’s team does not hesitate to take action – especially if there are any serious or persistent hygiene and safety breaches.

To put the council’s enforcement performance in context, in 2014/2015 the food safety team served emergency closure notices on 30 businesses across the borough. These notices shut down the premises until the problems have been proved to have been properly resolved. This was the third highest number of such notices nationally, and the second highest among London boroughs, out of 403 authorities that submitted enforcement data to the Food Standards Agency.

So far in 2015/2016, 31 such notices have been served to deal with imminent risks to public health such as pest infestations, serious contamination issues and suspected food-borne illness outbreaks.

In 2014/2015, the team also served the ninth highest number nationally of notices enforcing other hygiene improvement measures; and it also completed eight prosecutions against business owners through the courts – the sixth highest nationally and third highest among London boroughs. For 2015/2016, 13 food law prosecutions have been concluded to date, resulting in fines totalling more than £300,000 being imposed on businesses for offences including:

As a result of these prosecutions, two people have been prohibited by the courts from taking part in the management of any food business – indefinitely.

In addition, the team ordered more than 24 tons of unsafe food to be removed from the market in 2014/2015. This was predominantly because of high pesticide residues posing a risk to human health.  They also took action to ensure that where food contains undeclared allergens or is otherwise unsafe that it is withdrawn from the market and, where necessary, recalled from consumers.

Inspections are just one tool in ensuring food safety in the borough. In 2015, the team submitted 143 samples of food for analysis. Laboratories check these samples for health threats such as harmful bacteria and undeclared allergens as well as fraudulent descriptions such as beef being sold as lamb or standard rice sold as Basmati. Ealing is also one of a small number of authorities contributing to an important national piece of research on Norovirus, a significant cause of food-borne illness.

Officers also regularly carry out joint operations with partner agencies to tackle food safety regulations breaches. Last month (February 2016), a west London man was arrested on suspicion of supplying the industrial chemical known as DNP as a slimming aid, following an operation involving officers from the Food Standards Agency, the police and Ealing and Harrow councils.

The highly toxic chemical has been misused as a fat burning supplement and has been the cause of a number of recent deaths. Searches carried out at properties in the two boroughs also resulted in a significant amount of a substance believed to be DNP being found.

The food safety team responds quickly to complaints from the public and anyone concerned that a business is breaking food law can contact the team on 020 8825 6666, or email foodsafety@ealing.gov.uk

In addition, the team ensures residents are made aware of the enforcement actions taken locally. Details of all food law prosecutions since April 2015 can be found on the Food Standards Agency website.

Ealing Council welcomes proposals to call for the mandatory display of food hygiene ratings in England following the success of a scheme in Wales. Consumers are encouraged to check hygiene ratings at www.ratings.food.gov.uk