Home > Your memories of the Queen’s visits 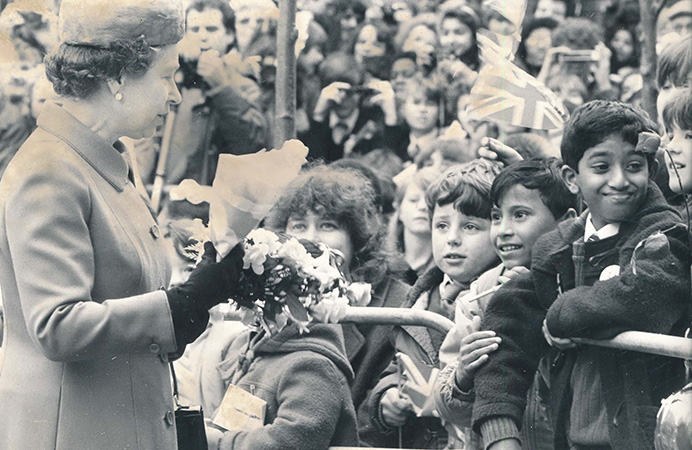 When we published our history article last week, by Dr Jonathan Oates, on a couple of Queen Elizabeth’s visits to the borough, we asked you for your own memories.

The previous piece looked at visits in 1946 and 1985. However, two of the photos on this page were supplied by resident June Lucas, who was present at Her Majesty’s more recent visit in 2002.

June wrote the following of her memories: “I was lucky enough to meet the Queen when she visited Gunnersbury Park in 2002 for her Golden Jubilee. I was invited as I was then secretary of Capital Connection, a Ladies Barbershop chorus.

“We all had a large picnic box given to us, and I kept the empty box.

“She and Phillip walked down the lines of people and shook our hands and said a few words. A lovely memory.”

‘I waved to her and she waved back at me’

Another resident, Urszula Bereza, was in Ealing in 1985 to see the opening of the shopping centre and has fond memories of the experience. She wrote: “The Queen visited Ealing to unveil the horse statue in Ealing Broadway in 1985. I went with my baby daughter in a pushchair to see her, but it was so crowded that I couldn’t get close enough. I started walking back along Uxbridge Road by Ealing Common where there were no people at all.

“Suddenly, I noticed two motorcycle outriders and I turned around and saw the Queen close behind in her car. I waved to her, and she waved back at me, and since there were no people anywhere near us I knew that she was connecting with us personally. I was absolutely delighted.”

A smile and a twinkle in the eye

Steve Pound was, until fairly recently, an MP for Ealing. Before then, he was a councillor for Elthorne ward 1982-86 and Hobbayne ward 1986-98.

He provided the following memory: “As a councillor in 1985, I was fortunate to be able to invite my mother-in-law as a guest to the opening of the now Ealing Broadway Centre.

“The council was mired in controversy at the time as it was slipping from Conservative to No Overall Control as councillors like Alex Thom and June Shipton broke with the Tories.

“Mayor May Heywood allowed each councillor one guest and in a desperate attempt to ingratiate myself with my very Tory mother-in-law I took her as my ‘plus one’.

“This initially caused a certain friction with Mrs Pound but was as nothing when what I hoped was to have been my finally gaining of maternal approval was dashed when she arrived to be presented to the Queen only to find that they were wearing identical rust coloured coats and hats.

“My mother-in-law was convinced that I would have been aware of this fact in advance and mischievously failed to notify her.

“Relations remained strained but the look on Her Majesty’s face remains with me to this day. The gentlest of smiles but a discernible twinkle in the eye.”