Home > When extreme weather hits us 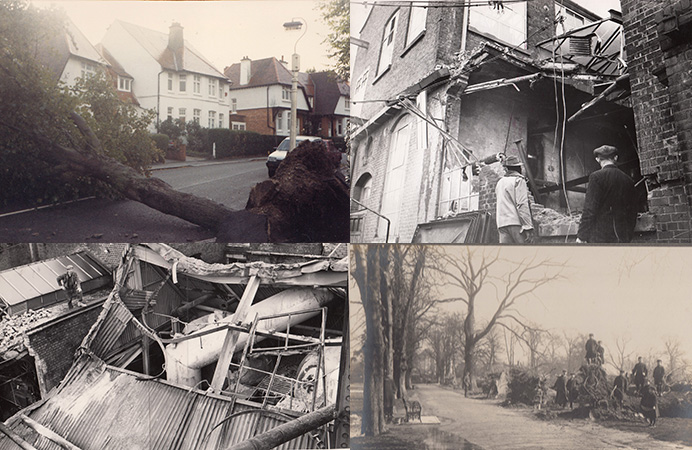 When extreme weather hits us

Having recently experienced fierce storms on 18 February this year, borough archivist Dr Jonathan Oates thought it seemed apposite to look at similarly tempestuous weather from the later 20th Century and its impact locally.

It is probable that most people will remember the Great Storm of 15-16 October 1987. Infamously, a weatherman made the comment on TV that no such storm was expected just before it happened. It was fortunate that the storm took place at night time when very few people were away from home.

With a windspeed of 100mph, more than 5,000 trees in our borough were blown down. Some caused damage to houses and cars, but fortunately no one local was killed. Trees blocked roads and damaged electricity and water supplies. Parks were closed over the weekend so that council staff could clear up the debris. In all the cost was £2.5million.

There were many calls to the emergency services but, unless there was an immediate risk, they were not treated as priorities. Where structures were looking rickety, the fire brigade was informed and steps were taken to make them safer. The police did knock on householders’ doors to suggest that they moved their cars to places where they would not be damaged by the impact of weather – such as trees that might have fallen on them.

Most of the wood from the trees felled by the weather could not be sold, but some people found uses for it. Students from the RCA used it for carving and children played on the fallen trees. Some people applauded the fact that the storm had carried away many estate agents’ signs that they thought had disfigured gardens in the borough.

Afterwards, there were attempts to plant more trees. The council ran a sponsored tree campaign in which residents could pay up to £20 to sponsor a new tree. The local newspaper issued tree bonds in the newspaper so people could collect them. And, once a thousand were handed in, the newspaper would plant a new tree. Actor John Nettles was being filmed locally and he planted a new tree in Brent Park.

Less well known to most is the hurricane which hit Acton on 8 December 1954. It was said to be the ‘Blitz without bombers’ and one resident recalled that it sounded like four jet aircraft rushing overhead. The tornado began in the Channel and gathered speed as it went over Portsmouth and into west London. Unlike the later storm, this occurred in the early evening while some people were still at work.

It seems that the roofs of houses and factories bore the main brunt of the storm. The 80-foot high chimney of the Royal Standard Laundry collapsed. Some people were injured but, fortunately, there were no deaths. Trees in Acton Park were blown down and at Gunnersbury the railway line was blocked by trees. Acton council was criticised for being unhelpful to non-council householders.

In many ways these two storms were very similar, but that on Acton is less well known in part because it is beyond living memory for many and because it was fairly localised unlike the more recent storm of 1987.

Read more local history stories in the history section of this website.

Watch videos of talks by Dr Oates and others on the Ealing Libraries YouTube channel.