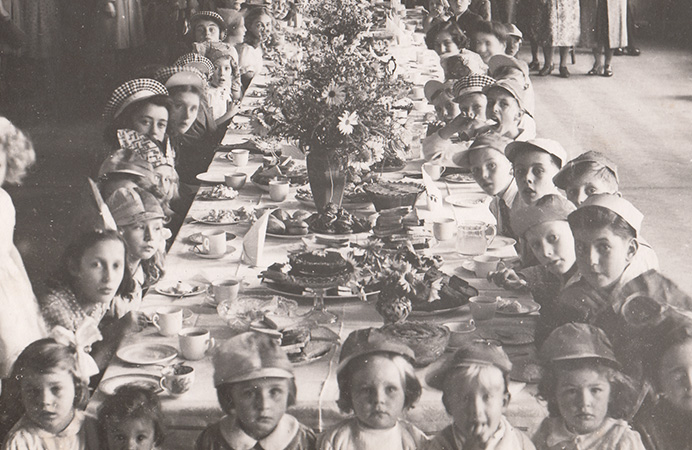 This year, the early May bank holiday has been moved to a Friday (8 May) instead of a Monday to commemorate Victory in Europe Day. Borough archivist Dr Jonathan Oates looks back to the original VE Day in 1945.

After nearly six years of war it was becoming increasingly clear in early May 1945 that Germany would surrender unconditionally to the Allies. Flags began to be displayed in Acton streets on 7 May. It was on the next day that a national two-week holiday was declared. Crowds flocked into the main streets of Acton, Ealing and Southall. In each place the mayor gave a short speech and the messages of Prime Minister Winston Churchill and King George VI were also relayed. These were listened to respectfully and then the celebrations and thanksgivings could really begin.

In Ealing these focused on the Green (in front of Pitzhanger Manor) and in Walpole Park. In the evening and early next day people went to the pubs and gathered nearby. People brought out pianos and wirelesses in order that they could dance and sing, which most did. Elsewhere, there were ‘Fluttering flags, rosettes in coats, ribbons in hair, fancy hats on heads, everywhere was red, white and blue in Southall on VE Day …Jolly crowds everywhere, laughing, dancing, shouting, soldiers jitterbugging, gay girls singing, roaring bonfires, burning Hitlers, floodlit cinemas – all Southall was drowned in excitement’.

Bonfires were lit in Greenford, Southall and Acton. Apparently, ‘Fires were alight in almost every street in South Acton and the glows lit up the sky, so that with the noise of the fireworks and the display of the searchlights, the scene was strangely like the Blitz’.

Ealing local Erica Ford kept a diary, which noted: ‘We watched band go out and play outside Town Hall from 8.00-9.00. Bob Hallett was wanted as drum major at last minute. We all cheered it & rushed to side entrance to watch & cheer it past. When band came marching back half of Ealing was marching behind & came right into the yard through the gates – wonderful sight. Band played some more, then dismissed.

‘Piano was brought down and chairs put in huge circle & dance band played & yard was floodlit. Very gay. Mrs Cook & her son came along. H cycled up park & sat there for a while. Lovely warm night.

‘Houses floodlit & bonfires scenting the air. M and D got back from Jarvis’ soon after me. We watched huge searchlight display weaving & remaining stationary’.

On the following day, after VE Day, there were many street parties. These were aimed at local children and included games and entertainments as well as food and drink.

‘Crowds dancing…Bonfires down every side street’

Much the same occurred on 15 August when news of the Japanese surrender to the Allies became known. Again, there was a two-day national holiday. They were somewhat of a lesser nature because the German war tended to be seen as being more dangerous, whereas that in the Far East felt faraway except to those who had servicemen in their families who were fighting there.

Erica Ford wrote of the two days of celebration: ‘Today VJ day…Hundreds of people going home after starting for work not knowing…Crowds dancing on the Green. Floodlighting in the Great West Road. Bonfires down every side street. Fore engines turned out …[next day]… They had dancing under covered way & it became quite crowded & jolly…Crowd from outside joined & when rain stopped were able to go right out into yard’.