Home > The mind of a serial killer 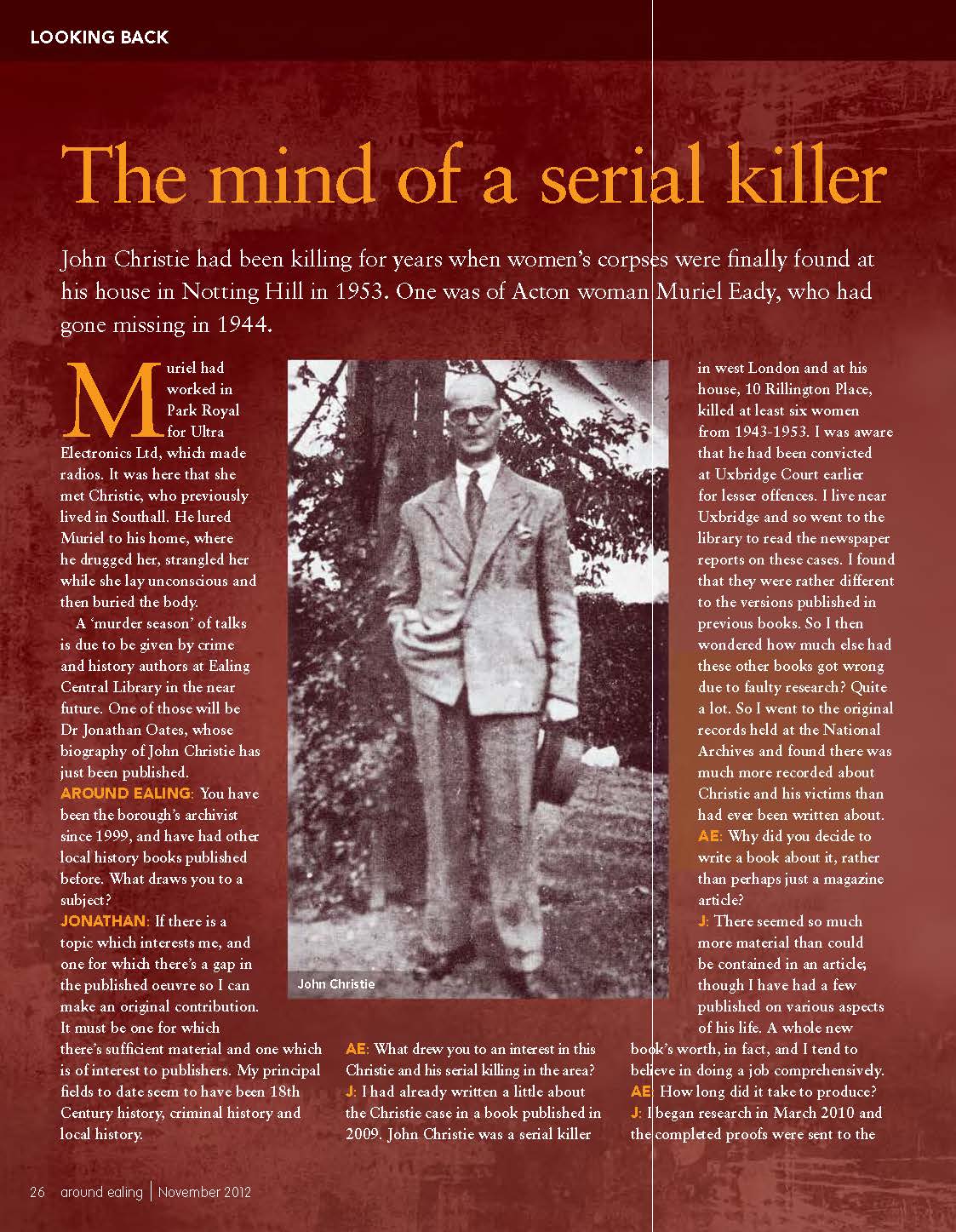 The mind of a serial killer

John Christie had been killing for years when women’s corpses were finally found at his house in Notting Hill in 1953. One was of Acton woman Muriel Eady, who had gone missing in 1944.

Muriel had worked in Park Royal for Ultra Electronics Ltd, which made radios. It was here that she met Christie, who previously lived in Southall. He lured Muriel to his home, where he drugged her, strangled her while she lay unconscious and then buried the body.

A ‘murder season’ of talks is due to be given by crime and history authors at Ealing Central Library in the near future. One of those will be Dr Jonathan Oates, whose biography of John Christie has just been published.

AROUND EALING: You have been the borough’s archivist since 1999, and have had other local history books published before. What draws you to a subject?

JONATHAN: If there is a topic which interests me, and one for which there’s a gap in the published oeuvre so I can make an original contribution. It must be one for which there’s sufficient material and one which is of interest to publishers. My principal fields to date seem to have been 18th Century history, criminal history and local history.

AE: What drew you to an interest in this Christie and his serial killing in the area?

J: I had already written a little about the Christie case in a book published in 2009. John Christie was a serial killer in west London and at his house, 10 Rillington Place, killed at least six women from 1943-1953. I was aware that he had been convicted at Uxbridge Court earlier for lesser offences. I live near Uxbridge and so went to the library to read the newspaper reports on these cases. I found that they were rather different to the versions published in previous books. So I then wondered how much else had these other books got wrong due to faulty research? Quite a lot. So I went to the original records held at the National Archives and found there was much more recorded about

Christie and his victims than had ever been written about.

AE: Why did you decide to write a book about it, rather than perhaps just a magazine article?

J: There seemed so much more material than could be contained in an article; though I have had a few published on various aspects of his life. A whole new book’s worth, in fact, and I tend to believe in doing a job comprehensively.

AE: How long did it take to produce?

J: I began research in March 2010 and the completed proofs were sent to the publishers in March 2012. However, this was done on a very much part time basis, with work, domestic duties and writing other books taking up time.

AE: Where did you find the information?

J: At the National Archives, at the British Library Newspaper Library, at the London Metropolitan Archives, at Kensington and Halifax Libraries and from a few people who were around at the time.

AE: Did your opinions change as you researched/wrote it?

J: I once saw Christie as merely an evil monster but now, whilst in no way condoning his killing or crimes, I see him as a human being as well, with virtues as well as vices.

This originally appeared in Around Ealing November 2012