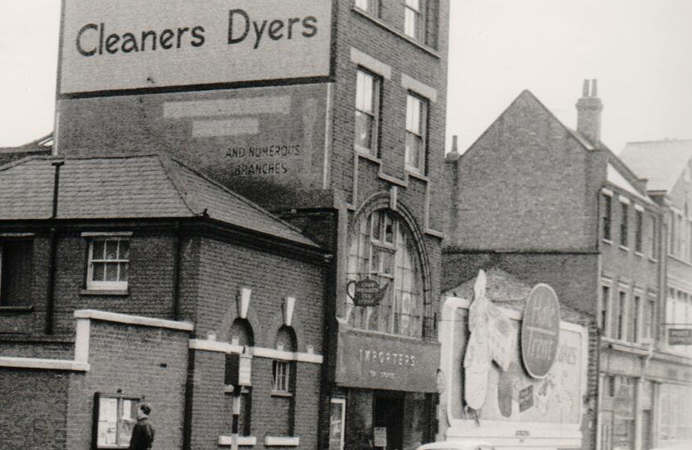 This is the fifth week of our serialisation of Alexander Goodlet’s diaries from 80 years ago. This week Goodlet’s attention is taken by ‘that ass’ Hitler, by various domestic happenings and a few shopping trips. (You can read the introduction to series here).

Got to bed on the sofa at 4.30 and slept like a log until 1pm. Had lunch with the mater and then went down to the bank. Back via Chiswick for shopping and then after tea took Joan and Thomasina home, going onto Ealing to air-mail letters to the pater.

Have since written Daniel and done most of the household routine jobs, so really I should get to bed reasonably early tonight.

A most curious thing has happened. James Rice sent a Christmas card to my people, and by some strange chance it was delivered to the other family of Goodlets in London; who wrote Rice, whose letter explaining the thing came this morning. Tonight the other Mrs Goodlet rang us up and has arranged to call in a fortnight’s time. Very strange.

Telegraphed the pater tonight for his birthday tomorrow.

Am very weary and sore all over.

Was up pottering about all night on one thing and another, and so had breakfast with the mater and the Boys. At 9 the mater went off to Brighton with the Aunts and I turned in and slept until 3.30 pm.

After that had rather a scramble, having to go to Ealing shopping, write the Doc. For his birthday tomorrow and get the tea ready for the Boys and dinner against Stanley’s advent at 7. However, all went well and later we sailed two races, one of which Kidd won and the other Mr Stanley. Fuzz sailed with us and did very well, securing a second place.

The mater arrived home at 11 pm, having had a very good day with the Brighton folk, all of whom are flourishing. She had a letter from the pater tonight, enclosing £5 in case the office does not provide. This seems to me most ominous.

Letter from Daniel this morning; it looks as if he may be up here this next week.

The mater brought me breakfast in bed and then left me to sleep, which I did gloriously until 4 pm. After tea went up to recover my watch from the jewellers. He made a very nice job of the new glass. I took Joan and Thomasina home and went on to the Library. Incidentally, saw Howard at Joan’s. He is pretty bad, I fear, poor chap.

Spent the evening quietly at home, among other things cleaning out the dining room chimney. Some mess.

A Russian and Italian steamer collided off Dover today. That ass Hitler celebrated the third anniversary of his reign yesterday by a great speech in which he claimed that the Germans were the most peaceful of all nations, and then signed a decree giving all German troops power to use any warlike measure to keep the civil population in order. Perhaps he’s right.

Up all night and had breakfast with the others. Then to bed and slept until 5.30. Afterwards to the Library. After dinner to the Aunts’, where I spent the evening. Hardly any news. Kidd came along just after dinner.

A letter from Daniel coolly announcing that he is coming to stay here on Monday.

A letter from the Pater to the Mater. I fear things out there seem to be going badly.

I omitted to record yesterday the sudden death of General Kondylis, the Greek ex-dictator.

Again messed about all night and only got off to sleep about 9 a.m. Result, slept until lunch time. After tea to Ealing to post letters and called at No. 15 on the way back.

Mr Stanley to dinner and we spent a pleasant time all round.

Shall be to bed earlier to-night. Am reading or rereading “Pickwick Papers” and “Tom Brown’s Schooldays”.

Seven long, weary years since our engagement, and everything worse in every way than then. What a life. Wonder what Jeanette is doing tonight.

Again up until 6 a.m. doing damn all, chiefly reading “Pickwick”. Rose at lunch time and then messed about until tea. Took Joan and Thomasina home and posted some newspapers to the Pater.

Met Eddie Baden, who struck me as looking a little self conscious. Home to find Daniel arrived from Plymouth. Spent most of the evening talking to him.

Had a letter from Ine and the Doc. This morning, and one from the Pater. Can’t quite make out from it how things stand out there.

D and I had a formal meeting of the KM tonight, but informal would describe it better. Must really send off 5s for the form and get it in in decent time for once.

Bed at 6.30 and then up to breakfast at 9.45. Ugh; and confound Daniel, whose presence necessitated this. Talked steam locos. With him most of the morning and after lunch put in a hard afternoon’s work on the map.

After dinner Daniel and I went over to No. 15 at 10 p.m. and spent an agreeable hour with them.

Troubles are apparently gathering. A suspicion that occurred to the Mater and me last week when the Pater sent along that small remittance is confirmed in an ugly way this morning, when the bank statement shewed that no salary for the Pater had been paid in this week. This looks ominous.

All the meat porters at Smithfield have gone out on an unofficial, but serious strike.