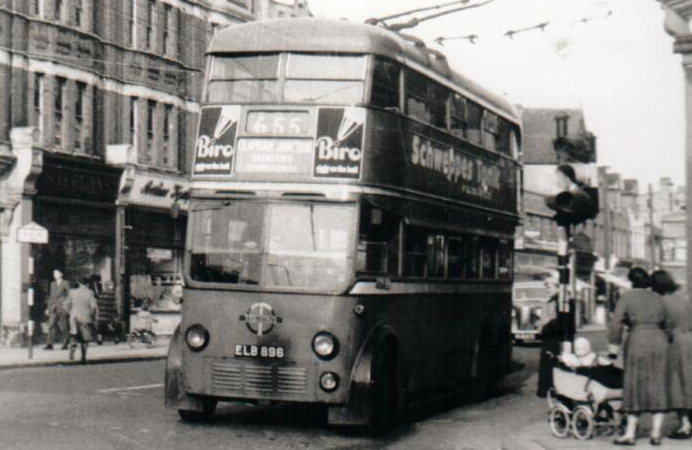 Week 47 of Goodlet’s diary is one of contrasts: Admiring the new trolley buses along the Uxbridge Road (pictured) while lamenting the fact that ‘news today is bad all round. Russia says that war is practically declared, and indeed it doesn’t seem far off.’ Read the introduction to start our serialisation from the beginning.

Slept till lunch time, with one brief interlude for tea and toast that the Mater brought me at eleven.

Busy with the Mater during the afternoon until Kidd and Joan came to tea with the little girls, who were in wonderful form. Saw them all home at 6 pm and found Howard there keeping the house open for them.

Found Mr Stanley had arrived by the time I got back. It was sporting of him to come, as his sciatica is far from better. Had a very pleasant evening, only spoiled by some sort of burst of ill feeling between the Pater and myself. God knows why, or what about.

To Horn Lane as usual, commenting on the new trolley buses along the Uxbridge Road. They are splendid vehicles, of course and uncannily quiet, but one regrets the passing of the old trams.

Still madras has not fallen, and looks less likely to do so now than it ever did; but Hitler is suspected to be planning some sort of interference in the position irresponsible blighter.

Slept very late today, so late indeed that I actually failed to reach the Admiralty by 17.30.

There were three of us in the class tonight and for some reason I did rottenly; and after nearly two and a half hours of the headphones I felt deafened and had a headache. Could hardly pick up a word tonight, even though they came down to 8 words a minute for my benefit.

Had a thorough rout round all the lower wireless rooms tonight and learned much of the routine and technical sides of the game. What a long, long way I have to go through.

Coming home I met Cackett at Ealing Common Station and brought him in for a cup of coffee. He is a nice lad.
Have dozed in front of the drawing room fire for the last three hours; damn silly but very pleasant.

I fear it looks as if the Rebels have taken part of Madrid, alas. Russia has arrested 10 Germans on a charge of espionage. Hitler is livid.

Was about in time to give the Boys and the Mater breakfast this morning. Went to bed about 9 am and awoke at lunch time to find that Ine had arrived for the day. She looks very well.

Went round to the Aunts in the afternoon and had a cup of tea with them. After dinner went over to Kidd’s for ten minutes and after that took Ine down to Victoria, where she duly met Doctor and so departed for Brighton. It has been a jolly day. Home to Ealing on the Southend.

The savage fighting and massacring around Madrid continues; a ghastly business.

Couldn’t sleep when I went to bed and so was awake to give the Boys breakfast this morning. Went to bed at 10 and slept until 2pm, Lazes about most of the afternoon and did not go out till after dinner. Went to Ealing to hunt up a chimney sweep and then called on Kidd and Joan, with whom I spent a pleasant hour.

Still no news of any money forthcoming from any source and, as far as I can make out, business is at a standstill. It is an unbelievable existence.

That swine Franco is steadily destroying Madrid by bombing and shell fire, with appalling loss of life. Tonight Hitler and Mussolini have recognised the Rebels as the legitimate Spanish government. So much the worse for them.

Today the King started his tour of the distressed areas in S. Wales amid great enthusiasm. Last night the government somewhat inartistically announced that something would be done for them. What a cabinet of sail-trimmers.

Was up in time to give the Boys breakfast this morning and to help put the dining room in order for the sweep, who came in at 10.30. So today we have been able to have a fire there and the difference is enormous; dinner in there tonight was quite pleasant.

Dozed most of the day. Shortness of funds prevented my going up to the Admiralty this afternoon, damn it. Mr Stanley to dinner with Kidd, JD and LH in afterwards. We sailed two very strenuous matches, Kidd and Mr Stanley being the winners. To Horn Lane as usual.

The international situation is universally recognised as being much worse and infinitely dangerous since Germany and Italy’s declaration for Franco and the latters’ threat of a blockade of Barcelona. The whole situation seems to me to have the ghastly, futile inevitability of a Greek drama.

I forgot to note yesterday the suicide of the French Home Secretary, M. Salengro, who has been most vilely hounded to death by political calumny.

Yesterday was the 100th anniversary of the birth of W.S. Gilbert.

Was up to give the Boys their breakfast and then dozing before the drawing room fire until lunch time; which was silly, as the morning was a most beautiful one and I had really intended to go out.

After lunch, feeling very sleepy, I went to bed and slept until 7 pm, thereby missing Kidd, Joan and the girls, who were in to tea. Went up to the Station just before dinner to get some cigarettes and that is the limit of my perambulations today.

Bust after dinner on routine work. Had two RNW letters this evening, one from Hanley and the other from my SL, W. Sarfas. Find the Reserve dinner is on Saturday next.

News today is bad all round. Russia says that war is practically declared, and indeed it doesn’t seem far off. I learn that Duff Cooper and all the other military maniacs are pressing the Cabinet for conscription, which of course they will get. Really, we are the most bureaucrat-ridden country in all the world.

Breakfast in bed this morning and up, quite spry, by lunch time. Kidd came in during the afternoon to say that they would not be to tea owing to the dense fog.

The Aunties came to tea; in fact Buzz had to go over and bring them across and they are staying the night.
After tea I went down to Ealing per trolley bus but, owing to the fog, it would have been as quick to walk. Posted letters to Hanley and Sarfas. Called at Kidd on the way home and found there Howard and that woman Kay Gibson. Home at 7.30.

The Pater very decently stood me the 5s for the Reserve Dinner.

There is little of note in today’s news, save of course that Europe is fermenting as usual, or rather, much worse than usual.