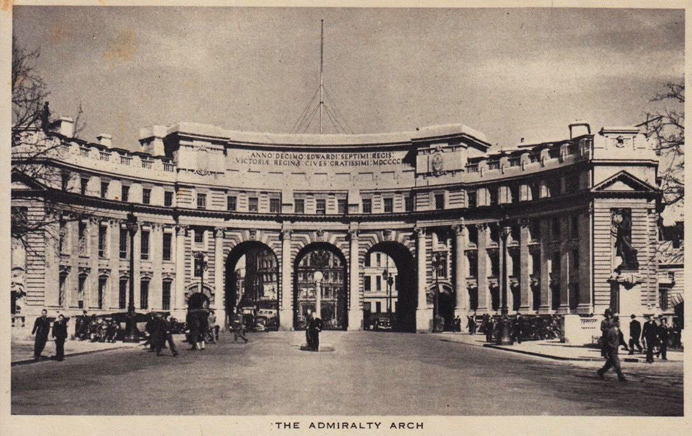 ‘Things are very difficult at home these days’, writes Goodlet in week 45 of the serialisation of his diaries from 1936. Meanwhile, Mussolini is making a nuisance of himself and Goodlet’s ‘projected visit to the Admiralty’ (pictured) is called off. Read the start of the series, the introduction, here.

Late to bed as usual and of course felt ghastly when awakened for lunch. After it Ine, the Doc. and the little girls turned up, followed by the Aunts and Kidd and his family; so it was a very big family party and went very happily.

The Brighton party left at six and took Buzz & Fuzz with them to spend a couple of days to celebrate their half term holiday. The Aunts stayed to dinner, to which Mr Stanley came, so it has been quite a social day. I walked to Horn Lane with Stanley at 12.30 and then walked half way to Ealing to calibrate the Pater’s pedometer between two mile posts; and all this in a drenching rain. One is quite mad at times.

That ass Mussolini made a tremendous speech at Milan today, hinting at all sorts of trouble for Britain if she did not recognise his Abyssinian conquest and give him all he wants in the Mediterranean. We shall see.

The Mater gave me breakfast in bed and then let me sleep on till 4.30. It was marvellous.

At six, after doing some shopping, I went to the Admiralty and duly filled in my papers for entry to the R.N.W.A.R. Hope they go through all right. I experience so many slips ‘twixt the cup & lip. Stayed there for an hour trying to pick up some transmission passages, but found it almost impossible. Hope I can improve on this or I shan’t last very long in the Reserve. However, they were transmitting at 10 words a minute, which is a bit steep for a beginner.

After dinner went round to the Aunts’ for an hour and found them well. When I returned here found that the Mater had had a letter from J.M., who says he hopes to sail on December 1st!

Mussolini’s speech has created a very bad impression everywhere except Germany, as was to be expected.
Saw some L.P.T.B. streamlined stock today, very fine.

Was very late last night, sitting up writing till 5 am, However, the Mater let me sleep until 4 am., so that was all right; although even then I felt very tired.

Busy routine after tea and dinner and should get to bed in reasonable time tonight.

The Boys returned from Brighton this morning and look very fit and cheery. They’ve had a good time.
Kidd called in before dinner; he is apparently taking up the study of the slide rule.

Today the King opened his first Parliament, but unfortunately rain led to the Procession being cancelled. History was made too on this occasion by the fact that for the first time a woman MP, a Miss Florence Horsburgh, was chosen to move the address to the Throne in thanks of the Royal speech.

A tragic end was put to a banquet last night when Sir Henry Curtiss Bennett KC dropped dead in the middle of a witty after dinner speech.

Actually made much better time to bed last night and, although my time in getting up today was nothing to shout about, I feel a lot more spry. I am sorry to say, however, that the Mater is far from well. She had a fit of giddiness this afternoon, and the Pater and Fuzz are in bed with colds.

Joan was over to tea this afternoon with the two youngsters and I took them home at six pm. We had dinner at the drawing room for tonight for the benefit of the invalids.

Went to Ealing to meet JD but the blighter never turned up, so I went for a long walk.

Everyone went off to bed early tonight and I have sat in front of the drawing room fire here for the last five hours; very foolish but very pleasant.

President Roosevelt is re-expected in USA with an amazing majority; it’s good to see character and idealism triumph somewhere in this mad world.

Guy Fawkes Day
Up at lunch time to learn, rather late, that the Pater wanted me to go down to the bank. Had rather a scramble and missed my usual train, but just managed it.

When I got home I learned that Mrs Lee was coming out for tea and dinner and so my projected visit to the Admiralty was “off”. She duly came and, I’m glad to say, looked much fitter than she did the last time. Stanley too turned up, so we were a party of seven for dinner. Hope this presages good luck.

Kidd and E.H. came in later and we sailed three matches with varying fortunes. To Horn Lane was usual and was it not cold too!

Not very much news. Madrid seems to be suffering rather badly with shell fire and air raids just now.

The Pater spent most of the day in bed with a heavy cold. For the first time I remember the youngsters did not have fireworks on Nov 5th.

Slept late as usual and spent most of the afternoon having breakfast and reading the papers; there’s always an extra amount of them on Fridays.

After tea, to Woolworths and the Library, getting well soaked in the process. Went to Woolworths to get a make-and break fitting, to build into a buzzer, and it must have been a sort of prophet’s instinct that led me to do so, for after dinner the post brought a colossal envelope addressed to Mr A.K. Goodlet, RNWAR (I liked that). It contained my acceptance for the Wireless Reserve, my badge and a tremendous collection of log books, signals etc. All very nice, but I shall have to put some energy into things of I am to justify all this.

Went to the Aunts’ for a brief visit.

Things are very difficult at home these days, and how to weather this present financial storm I can’t even guess. The necessity for a job is imperative, the opportunity for it non-existent.

Sat up so long last night studying my RNWAR papers and then finishing off the routine work that I had neglected that I was just in time to make the Boys’ breakfast and see them off. Had a bite of breakfast with the Mater and was fairly busy until lunch time, after which I pushed off to bed and slept like a log until 6pm. After dinner I went over to pay a call on Kidd, but he was out.

The news tonight is that the Rebels have taken Madrid, or at least, are now fighting their way in. The Government have left in aeroplanes and are said to have established themselves in Valencia.

A.F. Sir John Kelly was buried at sea today off the Nab Tower.

Still nothing happens and still one wonders what is to be done. What a mad existence.