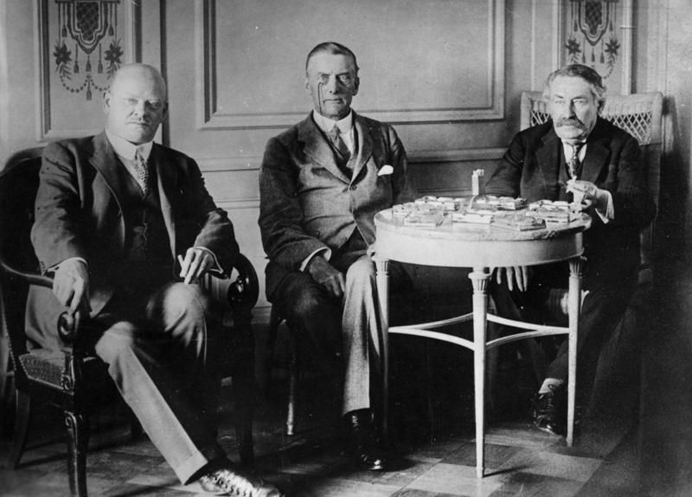 This is the 11th week of our serialisation of Ealing resident Alexander Goodlet’s diary from 80 years ago. This week, it dawns on him that his family thought the chance of him ever getting married ‘was pretty well considered to be a very slender one’; he rages against Mussolini’s fascist Italy, ‘these bastards’; and his toothache continues to drive him mad. To see the background to the serialisation, and the cast of characters, read our introduction.

Did not arise until lunch time and found that the toothache is much better, and unmercifully it has remained so; but I still have a slight ache in one tooth which, curiously, is a perfectly good one.

In the afternoon went over to the Aunts’ for tea and found Mary Allan there. Kidd and Joan were here for dinner tonight. Joan’s baby is expected in a few days now, I understand. They left at 10 p.m. and I put in an hour and a half of routine work, and should get to bed by 1 a.m. tonight.

Buzz put in a tremendous night’s work in preparation for his Cert A. exam, tomorrow. Fuzz went off at 9.30.

The whole international horizon is of course obscured by Germany’s remilitarisation of the Rhine and denunciation of Locarno [international treaty, see picture]. France is being very obstinate, as indeed she has a clear legal right to be; but I hope to goodness she will shew some reasonableness too before it is too late. The whole damned situation has just played into Mussolini’s hands.

The Mater wakened me this morning with the good news that Joan had had a daughter early this morning, and that they were both very fit and happy.

Old Kidd is becoming quite a family man. He brought Thomasina along here at 7 a.m. on his way to work and she has fairly made things hum here all day. Poor little soul, though, she has had a nasty fit of sickness tonight after she went to bed. She is now however happily asleep in her pram in the drawing room, beside her beloved father. It is marvellous to observe the influence he exercises over the youngster.

He tells me that the new daughter has wonderfully clear-cut features and is very good looking. I wonder what they will call her? I was talking about it to the Mater today and said that if it had been a boy they were going to have called it Alexander. This raises all the miserable heartburnings of eighteen months before Thomasina was born. I cannot understand the justice of such an intention, in people who are supposed to be my friends. When I pointed this out to the Mater she was quite unsympathetic to my view and stoutly maintained that any son had the right to give his son his grandfather’s name; and more or less pointed out plainly that there was little likelihood of my having a son and that the family Christian name must go on. My mother, of all people. It looks as if my chance of ever getting married was pretty well considered to be a very slender one. So much for the privilege of being head of the family.

I took a stroll this afternoon as far as the GWR bridge and saw two Bulldogs on a short down express, one unnamed and the other Goldfinch. Mrs Stanley came in for coffee tonight and we had some music. I walked to Acton with him later.

A most curious and surprising thing happened this morning. Lord Waring rang up the Pater and suggested to him that in view of the national rearming and the present international situation…it might be possible to start in once more on the manufacture of supplies for war and repeat their triumphs of twenty years ago. I don’t know what the Pater thinks of it all, but it is certainly an odd sort of coincidence and of course means another contact with business; and these days one cannot afford to neglect a single prospect.

The international prospect is more thunderous thank ever and France is taking a very grim attitude; and all over the situation bristles with troubles and difficulties. Mr Eden will have an extraordinarily tricky row to hoe, and I don’t envy him the job. Today, too, Italian aircraft have for the third time deliberately bombed the British Red Cross detachment in Abyssinia. How I wish that at least we could give these bastards something to go on with. But there seems no prospect of it.

My toothache has subsided to an occasional twinge in the jaw, for which Heaven is to be thanked.

Was wakened at – (Thursday night) I had barely written the first three words when I was laid out by an attack of toothache such as I’ve never even imagined could be possible. Sat 1.30 p.m. the Pater took me round to the doctor’s for an injection of dope, which had however not the very slightest effect, and I must have raged round the place until about 5 a.m., when I dropped on the sofa into unconsciousness. Anyway, that is where the Mater found me at six in the morning and covered me up.

As for the news, I am very sorry to say that Lord Beatty, A.F. died this morning after a long illness at the comparatively early age of 65. A tragedy. Also Lord Dartmouth, at a great age.

The international situation becomes worse than ever, the French taking a very strong view of affairs. The Locarno parties have decided on a meeting in London tomorrow.

The Mater visited Joan in hospital today and found her fine. The Youngster is to be called Annabelle

Woke at 2 p.m. and mercifully found the toothache stopped. Found A. Jess had gone to the bank so, everything being all right I went round to the dentist and had the three sinners extracted. The business was not nearly so painful as I feared, but tonight I am left with a maddeningly painful jaw which aches unceasingly. Hope it’s gone by tomorrow.

This evening Mr Stanley came to dinner, and he, Kidd and the Hodges and I sailed two races which I had the luck to win.

The Mater had a fine cheery letter from J.M. this morning; poor chap, he broke his wrist recently playing rugger; but it now appears to be all right again.
Joan and Annabelle are going so well, so that’s that.

Slept until lunch time today and spent most of the afternoon looking after Thomasina, as the Mater is far from well again; cold and weariness seem to be all over her again. The Pater went off to Brighton for the weekend, so the house is full of chops and changes.

Made a hurried visit to the Library at 7.30 and Kidd and I had dinner together at 9 p.m. We had a long discussion on yachting race marks and worked out many systems, none of which seemed to give an all round degree of equity.

Buzz and Fuzz came back from M.T.s at 11 and 11.30, where they had been to the school play Bartholomew Fair, in which Buzz has a small part. The Mater has wisely spent the evening in front of the drawing room fire and seems to have gone to bed feeling a bit better.

The international situation is still critical. If only Eden could persuade Hitler to make some reasonable offer, what a triumph it would be. But I fear he won’t, and then?

Woke at 7, which was just too late to be of much use and save the Mater from getting up, but managed to lend a hand looking after the youngster until nine, when Mrs Johnstone turned up. Thereafter slept until lunch time, but rather fitfully as my jaws are still very painful. Busy after lunch on routine and made a flying visit to Ealing to buy washers for the kitchen taps.

At 6.15 Mr Stanley called and he, Fuzz and I went off to Merchant Taylors to see a performance of Ben Jonson’s Bartholomew Fair, in which Buzz had a part as the mousetrap seller. The whole thing was admirably produced and acted, and many of the parts exceptionally well done. The scenery too, by one of the boys, was a wonderful achievement. Home by 11 to enjoy a jolly good supper the Mater had waiting for us. Walked to Horn Lane with Stanley.
The international situation unchanged, but Mr Baldwin has provided a sensation by appointing that blighter Sir Thomas Inskip as the first Defence Minister.

Mater gave me breakfast in bed, where I woke very cold for some reason. Up for lunch and very busy all afternoon. Ine rang up to say the Pater had a cold and would not be back till Tuesday.

Mr Stanley came for dinner, as did Howard, and after wards Kidd, they and I sailed three most amusing races, two of which Kidd won. Walked to Horn Lane as usual.

Have just put in two hours devising a formula for calculating Yachting marks and, I think, found a very good one.