Home > The art of democracy 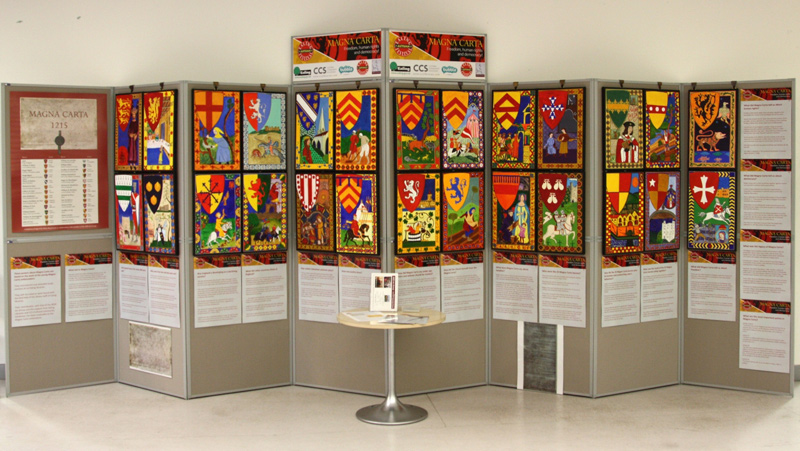 The art of democracy

To mark the 800th anniversary of the Magna Carta, an exhibition is being held in libraries across the borough. The exhibition opened in June with a special, themed event at Ealing Central Library which featured a talk by borough archivist Dr Jonathan Oates. The exhibition has remained in Ealing but will start touring all the other libraries in the borough after 4 July. A digitised version will be shown where there is not enough space to show the original exhibition.

Ealing Autumn Festival has organised the project, which has been funded via Ealing Council’s community website Bubble and 16 of the council’s ward forums.*

The festival’s team joined forces with the libraries (run by Cultural Community Solutions on behalf of the council), and commissioned 4020 Art Group to create a colourful display based on central characters behind the famous legal document: The 25 English barons and King John.

Artwork shows the coats-of-arms of the barons and the king beside everyday events, as imagined from the 13th Century. Each is finished with a medieval-style decorative border.

Diana Braybrook, an artist from west London, and tutor to the 4020 Art Group, said the work by the group’s 26 members was inspired by the vibrant colours of medieval stained glass and the highly decorative illuminated manuscripts of the period.

She said: “What could be more appropriate than commemorating the Magna Carta which was signed at Runnymede, only 12 miles from our studio at Hanwell Community Centre?”

One of the most famous documents in the world, Magna Carta, or the Great Charter of Liberty, was born on 15 June, 1215 at Runnymede, near Windsor, when King John was persuaded to accede to a number of demands made by a powerful group of his barons. It was first drafted by the Archbishop of Canterbury to make peace between the two sides.

At the time it was a unique piece of legislation which was later reaffirmed on numerous occasions, and it still has some legal force today.

Indeed, today for people around the world, Magna Carta remains an enduring symbol of freedom; and of the fundamental rights that lie at the very heart of democratic societies.

Gillian Spragg, artistic director of the Ealing Autumn Festival, said: “It is fascinating to see how all the fundamental ideas of what is fair and right have changed very little over the last 800 years, though there are also aspects which at that time depended on rather different customs from ours.

“Celebrating the Magna Carta is a tremendously exciting idea to take up this year, especially because we are emerging from our recent elections. How we exercise our democratic rights can really matter and there could not be a better moment to delve into the origins of our freedom, human rights and democracy.”