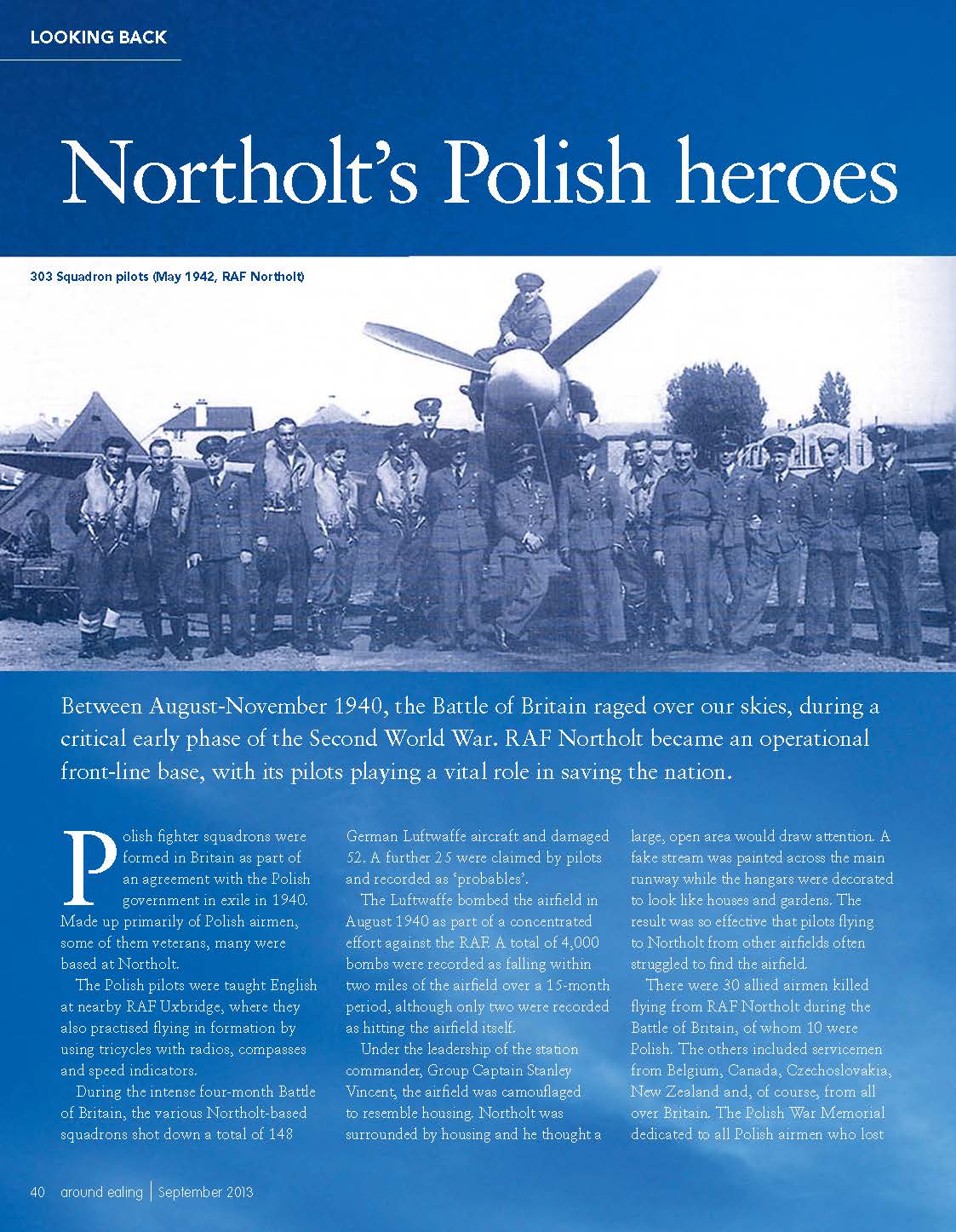 Between August-November 1940, the Battle of Britain raged over our skies, during a critical early phase of the Second World War. RAF Northolt became an operational front-line base, with its pilots playing a vital role in saving the nation.

Polish fighter squadrons were formed in Britain as part of an agreement with the Polish government in exile in 1940.

Made up primarily of Polish airmen, some of them veterans, many were based at Northolt.

The Polish pilots were taught English at nearby RAF Uxbridge, where they also practised flying in formation by using tricycles with radios, compasses and speed indicators.

During the intense four-month Battle of Britain, the various Northolt-based squadrons shot down a total of 148 German Luftwaffe aircraft and damaged 52. A further 25 were claimed by pilots and recorded as ‘probables’.

Under the leadership of the station commander, Group Captain Stanley Vincent, the airfield was camouflaged to resemble housing. Northolt was surrounded by housing and he thought a large, open area would draw attention. A fake stream was painted across the main runway while the hangars were decorated to look like houses and gardens. The result was so effective that pilots flying to Northolt from other airfields often struggled to find the airfield.

There were 30 allied airmen killed flying from RAF Northolt during the Battle of Britain, of whom 10 were Polish. The others included servicemen from Belgium, Canada, Czechoslovakia, New Zealand and, of course, from all over Britain.

The Polish War Memorial dedicated to all Polish airmen who lost their lives during the Second World War stands near the south-eastern corner of the airfield.

After the Battle of Britain, the station remained a base for daytime fighter operations – and it also became home to Prime Minister Winston Churchill’s personal aircraft, used for flying to meet other allied leaders.

No. 303 (Kościuszko) Polish Fighter Squadron was one of 16 Polish squadrons in the RAF during the Second World War.

It is believed to have been the highest ‘scoring’ of the RAF’s 66 squadrons involved in the Battle of Britain.

The squadron was formed in July 1940 and deployed to RAF Northolt. It had 135 Polish ground staff supporting the 21-strong team o pilots – many of whom were experienced veterans. The Battle of Britain started in August and they were soon in action.

On 2 September, they were called to action, or ‘scrambled’, three times. On the last scramble they shot down two German planes. The second plane was claimed by former Czechoslovak Air Force pilot Sergeant Josef František who, with a total of 17 ‘kills’, went on to be the RAF’s highest ‘scoring’ pilot during the Battle of Britain.

The squadron regularly intercepted German bombing formations heading for London and helped to repel or weaken the constant stream of raids.

In the massed dogfights over London on 15 September 1940, the squadron was heavily involved, with nine Hurricanes intercepting a German raid in mid-morning. Nine kills were claimed. In the afternoon, a further six German places were taken down.

Of course, with the pilots consistently risking their lives, there were frequent injuries and bail-outs and, unfortunately, seven deaths. But, relative to the number of enemy aircraft shot down, the losses were small.

The squadron’s success in combat can be mainly attributed to the years of extensive and rigorous pre-war training many of the long-serving Polish veterans had received in their homeland, far more than many of their younger and inexperienced RAF comrades then being thrown into the battle.

On one occasion, following a prolonged air battle, No. 303’s Sergeant Stanislaw Karubin was chasing a German fighter at treetop level. As he closed in on the tail of the German fighter, Karubin realised that his Hurricane had run out of ammunition. Rather than turning back to base, he closed the distance and climbed right above the German fighter.

The German pilot was so shocked to see the underside of the Hurricane within arm’s reach of his cockpit that he instinctively reduced his altitude to avoid a collision and crashed into the ground.

By 1941, the immediate threat to the UK was over and RAF went on the offensive over occupied Europe. The Polish squadron converted to using the Spitfire and escorted numerous bombing missions over enemy territory.

All three of the following squadrons also spent significant time based at RAF Northolt, and all disbanded in December 1946:

This originally appeared in Around Ealing September 2013