Home > Acton Gazette and the Ripper 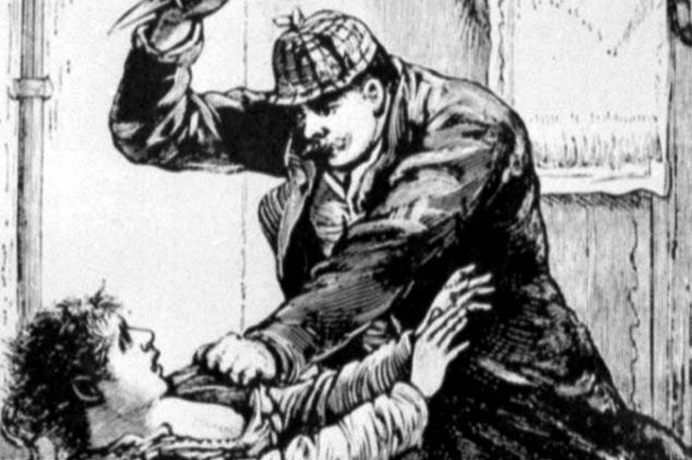 Acton Gazette and the Ripper

The recent publicity given to a postcard sent in the autumn of 1888 to Ealing Police Station and signed ‘Jack the Ripper’ reminded borough archivist Dr Jonathan Oates that, in the same year, the Acton Gazette covered the Whitechapel murders.

In the 19th Century, the Acton Gazette, as with many local newspapers of the time, published national and international news as well as local news. Therefore, the Ripper story gripping the nation in 1888 also featured prominently on the pages of the Gazette.

Although it does not seem that the newspaper covered the murder of Martha Tabram on 7 August 1888, it did cover, in a fashion, the two of the five women who are generally thought to have been the Ripper’s victims. A column headline was titled, ‘Horrible Murder of a Woman – Another Whitechapel Mystery’. This was Mary Ann Nicholls, found slain on Bucks Row on 31 August. The newspaper alluded to previous killings, ‘Scarcely have the horror and sensation caused by the discovery of the murdered woman in Whitechapel some time ago had time to abate’. This is presumably a reference to the Tabram murder, though could conceivably refer to the murder in Whitechapel of Emma Smith in May 1888.

In fact, the latter is more probable despite the time lag because it is briefly mentioned in the same article. According to the journalist, ‘All the leads to the conclusion the police have formed, that there is a maniac haunting Whitechapel and that the three women were all victims of his murderous frenzy’. The article had the examining doctor note that the killer might have been left handed because the wounds inflicted were from left to right, though he later stressed that this was only speculation.

A week later the newspaper published ‘Another East London Tragedy – Whitechapel in Terror’. This concerned the murder of Annie Chapman on 8 September. Her body was found in the back yard of Hanbury Street in the early hours of the morning. It was thought that the body had been mutilated more savagely than the previous victim. Everyone believed that the same killer was responsible for all these crimes.

The neighbourhood was horrified: ‘The whole of the East End is in a state of consternation at the latest and what undoubtedly is the most horrible of a series of murders which have taken place in so small an area and during so short a period. Nothing else is talked of, even by men who are hardened to seeing a great deal that is brutal. Strong, buxom muscular women seemed to move in fear and trembling, declaring that they would not dare to venture in the streets unaccompanied by their husbands’.

What seemed to make it all worse was that ‘the murder was committed in broad daylight, and in a street sufficiently near to the Spitalfields market as to be, at the time in question, a busy thoroughfare’.

Who was the Ripper?

The murders of Elizabeth Stride and Catherine Eddowes, taking place on the same night (30 September) at the month’s end were not explicitly reported in the Acton Gazette but the newspaper did not leave the subject alone. Instead they published theories given in other newspapers. The first was whether an anatomist had been at work, opening up the bodies of the victims with the goal of removing human organs. All the hospitals in London declared that no one had offered to sell them any such organs, but University College Hospital  and Middlesex Hospital had refused to say whether they had or not and this led some to believe that they had been offered such. It was suggested that someone with medical knowledge was the killer to have been able to have done what he did to the bodies, but the medical profession naturally denied it. Having had a second opinion at the inquest could of Annie Chapman would have confirmed or denied this, ‘Why did the police neglect this simple measure, when they had the resources of the government at their disposal?’

The killer’s arrest was reported when it was learnt that a desperate struggle had taken place in Baker’s Lane, Whitechapel. The man was taken to Bethnal Green Police station. Here he was apparently charged on suspicion of committing the murders. However, a later report revealed that he had simply stolen a cask of oil.

Another suspect was a Thomas Duncaster. He was being watched by PS Robinson, disguised in women’s clothing and the plain clothed DS Mather. However, in Clerkenwell, the suspect became involved in a brawl and he was stabbed by one Jarvis. Apparently, another suspect was arrested one night in Clerkenwell in connection with the Whitechapel murders but was released shortly afterwards.

Thomas Murphy was found in a workhouse in Holborn with ‘a knife of formidable proportions’. He was arrested but refused to talk after making the one statement. Two other men made allusions to Jack the Ripper as the Whitechapel killer was now known. John Brinkley was charged as being drunk and disorderly in Goswell Road, wearing women’s clothes. He was drunk and told policemen that he was going to find Jack the Ripper. John Avery was also drunk when he seized a soldier in York Road ‘and saying he was Jack the Ripper and would show him how he committed the murders’. Both men were locked up for a fortnight.

The Central News Agency believed the investigation would be fruitless, despite noting the activity on the police’s part, ‘So conflicting, however, are the various descriptions of the supposed criminal, that there is but slight ground for anticipating successful investigation’.

The murder of Mary Jane Kelly on 9 November 1888 was noted by name, but an allusion was made in connection with another possible suspect under the headline The Whitechapel Murders – Important Arrest: ‘On Tuesday morning a man was seen hurriedly leave one end of the low side streets in the neighbourhood of Dorset Street, the scene of the last tragedy. His appearance attracted the attention of several person, and within a few seconds some children had raised the cry of Jack the Ripper. The man turned in a frightened and excited manner and tried to get down one of the numerous courts that abound in the locality By this time, however, a mob had collected and he was prevented from doing so’.

After resistance, a detective arrested the man and took him to the Commercial Street police station, where an excited crowd assembled outside. Apparently ‘the police would appear to have attach considerable importance to the arrest and several detectives hastily left the station, two of them going in the direction of Dorset Street’. The police were, as usual, reluctant to give any details, but ‘an experienced detective, in leaving the station, stated that he confidently thought they had at blast arrested the right man’. The age and appearance of the man answered the description given by one of the witnesses (perhaps George Hutchinson, who has become a suspect himself, who described the suspect as a well dressed, wealthy man, possibly not British, in his early 30s) of the probable murderer of Mary Kelly. We do not know who he was and he was never charged, so presumably was released shortly afterwards.

There was also concern that shops displaying models of the human anatomy should withdraw them in case they excited morbid curiosity or worse. Meanwhile, the Spitalfields Vigilance Committee decided to send a deputation of five members to their MP, Samuel Montagu, to suggest he talk to the Home Secretary about having additional police protection and licensing amateur detectives.

Yet another suspect was a man who left Birmingham by train for London. He was arrested at Euston station and taken to Scotland Yard. He lived in Birmingham and had taken a train to London on the morning before each murder. He was also medically trained and had practised as a doctor in London.

He dressed respectably and was similar to a witness description (Hutchinson’s again?) of a man seen with Mary Kelly on the night of her murder. However, he could supply a satisfactory account of himself and so was released. This did not stop the police continuing to believe that the killer was a commuter from Birmingham or another Midlands town. A watch was kept on new arrivals from there, but without any success.

Matthew Packer, a fruit seller of Berner Street, told the police that he suspected that his cousin was the killer. The police found the cousin but doubted much of Packer’s story and did not seriously suspect the cousin. Packer also claimed that he sold a man grapes and later grape stalks were found by the body of Elizabeth Stride.

Finally, the Acton Gazette printed a story from The Novosti, which accused a Russian, Nicolai Vassilyeff. He had been born at Tiraspol in 1847 and became a student at Odessa University, he also became a ‘fanatical Anarchist’ and arrived in Paris in the 1870s. There he became insane and was caged in an asylum. He developed a theory that ‘fallen’ women could only atone for their sins by being killed, so he murdered several and was arrested in 1872. Found to be insane, he was spared the death penalty. Just before the first of the Whitechapel murders he was released and allegedly came to London and lived with the poorer part of the population there. After the first murder he disappeared, leading Russians in London to believe he was the killer.

Ironically the final reporting on anything about the case was in January 1889 and then the newspaper did not realise its potential significance. This was the inquest on a man found drowned in the Thames and taken ashore at Chiswick (a few weeks after the last murder). The man was not named, but he had a lot of money on his person, a single ticket from Blackheath, and was weighed down by heavy stones. Enquiry found that he had left a suicide note stating that he feared he was becoming insane, just like his mother. It is now known that the man, a young teacher and barrister, was Montague John Druitt and was named by a senior police official in 1894 as a likely candidate for Jack the Ripper. The evidence for this conclusion is unknown and no one has ever found anything to support this hypothesis.

There seems to have been no local mention of the postcard sent to the police. There were, in fact many such missives being sent to the police in London at this time. It is thought that most, if not all, were the work of cranks and not one was by the real killer. Presumably the one sent to the Ealing police was by an Ealing resident, who had read about the murders in the national press and had seen a report of the Dear Boss letter (received by the Central News Agency on 27 September) in which the now famous pseudonym of the killer was first used.