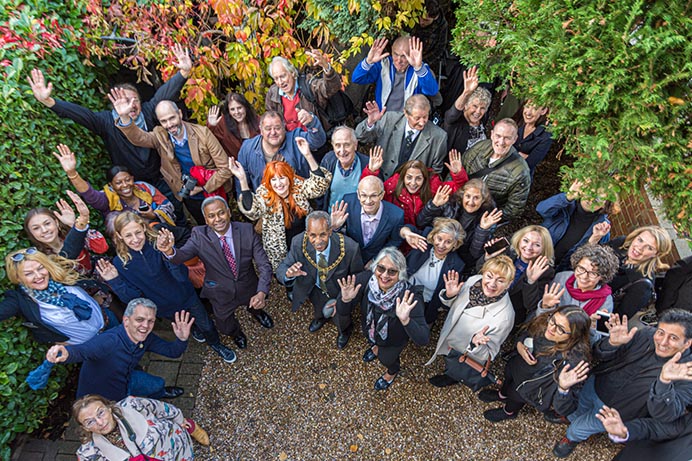 The wife of a celebrated musician was joined in Perivale by fans and the mayor to unveil a plaque outside the childhood home of her late husband.

Nicky Hopkins (1944-94) was a renowned musician and considered by many to be one of the greatest session rock keyboardists ever. He played alongside some of the most celebrated acts of all time. Among others, his work appeared on recordings by The Beatles, The Rolling Stones, The Kinks, Jefferson Airplane, Jeff Beck, Steve Miller, John Lennon, Donovan and many more.

He played on famous songs such as Sympathy for the Devil, Revolution and Jealous Guy.

The Ealing Civic Society plaque on the home in Jordan Road, Perivale, was funded by Ealing Council’s Perivale ward forum. It was unveiled by Moira Hopkins, along with: John Wood, who had led the campaign for recognition of Hopkins’s life and work; mayor of Ealing, Dr Councillor Abdullah Gulaid; and local councillor Tariq Mahmood. They were joined by fans, friends, neighbours and one of the current occupants of the house, Illona Carroll.

Classically-trained, Nicky Hopkins is already remembered in nearby Perivale Park with a memorial bench commissioned by Mr Wood that was installed in September 2018. It was designed to look like a keyboard . The next stage in his campaign is to have Hopkins admitted to the Rock & Roll Hall of Fame.

Early in his career, Hopkins was a regular performer at the Ealing Blues Club and played with such British beat pioneers as Cyril Davies, Screaming Lord Sutch and Cliff Bennett.

Following his recovery in 1963 from a long illness Hopkins became a sought-after session player.

Just some of his credits are: The Who (Anyway Anyhow Anywhere, Getting In Tune), PP Arnold (The First Cut Is The Deepest), The Kinks (Sunny Afternoon, Days), The Beatles (Hey Jude, Revolution), The Rolling Stones (Sympathy for the Devil, Angie, Street Fighting Man), Donovan (Barabajagal), Jefferson Airplane (Volunteers), John Lennon (Happy Xmas (War Is Over), Jealous Guy), Joe Cocker (You Are So Beautiful) , Art Garfunkel (I Only Have Eyes For You) and Spinal Tap (Break Like The Sun).