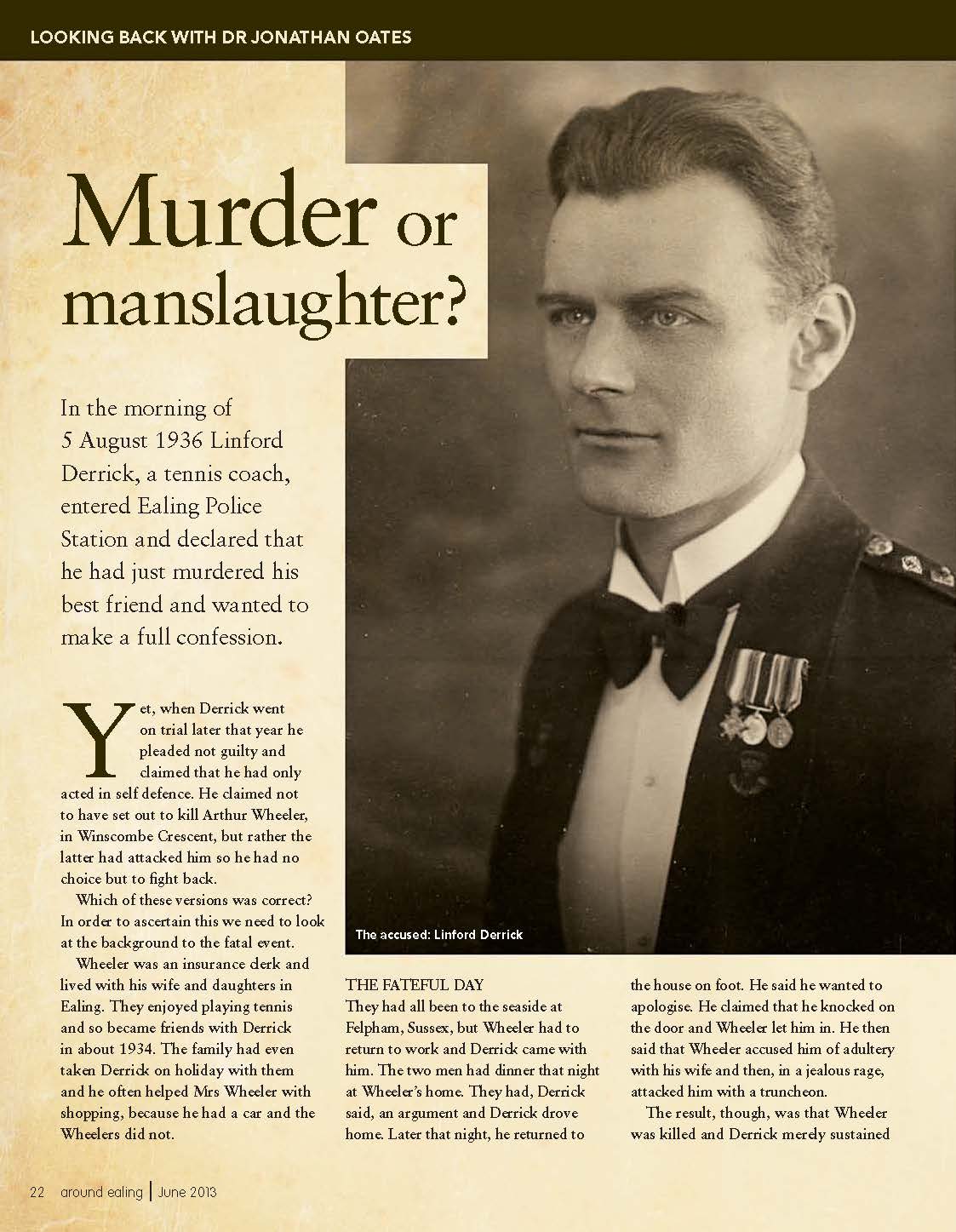 In the morning of 5 August 1936 Linford Derrick, a tennis coach, entered Ealing Police Station and declared that he had just murdered his best friend and wanted to make a full confession.

Yet, when Derrick went on trial later that year he pleaded not guilty and claimed that he had only acted in self-defence. He claimed not to have set out to kill Arthur Wheeler, in Winscombe Crescent, but rather the latter had attacked him so he had no choice but to fight back.

Which of these versions was correct? In order to ascertain this we need to look at the background to the fatal event.

Wheeler was an insurance clerk and lived with his wife and daughters in Ealing. They enjoyed playing tennis and so became friends with Derrick in about 1934. The family had even taken Derrick on holiday with them and he often helped Mrs Wheeler with shopping, because he had a car and the Wheelers did not.

They had all been to the seaside at Felpham, Sussex, but Wheeler had to return to work and Derrick came with him. The two men had dinner that night at Wheeler’s home. They had, Derrick said, an argument and Derrick drove home.

Later that night, he returned to the house on foot. He said he wanted to apologise. He claimed that he knocked on the door and Wheeler let him in. He then said that Wheeler accused him of adultery with his wife and then, in a jealous rage, attacked him with a truncheon.

The result, though, was that Wheeler was killed and Derrick merely sustained a few cuts and bruises. It was argued that a man in his physical condition, that of a tennis coach, should have been able to have overcome a sedentary office worker such as Wheeler without resort to fatal violence. Yet Derrick said he was fighting for his life and struck blindly in the heat of the moment.

Derrick had planned to make the death seem to be the result of a burglary which ended tragically, but went to the police instead and confessed. There was an inquest and a hearing at the magistrates’ court. It was decided that there was enough evidence to charge Derrick with murder.

At the trial at the Old Bailey, the jury had to decide whether Derrick had deliberately set out to kill, in which case it was murder and thus a hanging offence, or whether it was manslaughter and thus a custodial sentence, or whether he was not guilty of either. The jury gave Derrick the benefit of the doubt and decided he was not guilty of murder but guilty of manslaughter and he was given a 10-year prison sentence. The judge concluded that this was a lenient sentence.

Clearly no one but Derrick knew exactly what happened on the fatal night. The forensic evidence could only state that Wheeler had died a violent death and no one doubted that Derrick was responsible.

There was no question of whether the truncheon used was not Wheeler’s, because it was known he kept it for self-defence against burglars. It is uncertain whether there was any untoward behaviour between Derrick and Mrs Wheeler or that Wheeler thought there was.

Whether Derrick was rightly sentenced depends on whether we believe him and whether the circumstances leading up to Wheeler’s death seem plausible.

This originally appeared in Around Ealing June 2013