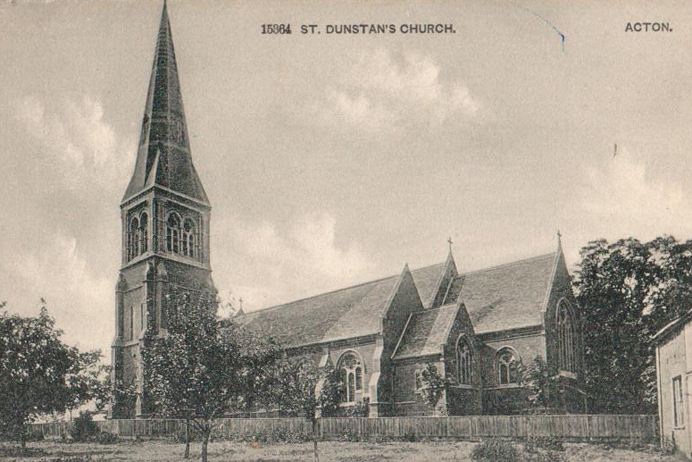 Ghosts and the supernatural will rear their heads next month, in October, with Hallowe’en everywhere you look. St Dunstan’s church in East Acton, a relatively new church (mid‑Victorian), has been the subject of much speculation and, perhaps, could be deemed the borough’s most haunted church, writes Dr Jonathan Oates.

It was in 1946 that several witnesses gave detailed testimony to having seen ghosts in the church (pictured above in 1900).

The Rev. Hugh Anton-Stephens, who had become vicar in 1944, first brought these manifestations to public knowledge. He wrote that on almost every evening a dozen monks with golden brown habits walked up the central aisle in procession and then into the chancel.

Sometimes another monk in Eucharistic vestments would celebrate mass in the memorial chapel. There was yet another monk, in violet robes, whom spoke to the vicar. Apparently he ‘is a ministering spirit, sent to inspire and instruct. I am indebted to him’ as he had given advice about confirmation classes.

Kenneth Mason, a journalist, visited the church later that year. He saw a procession of six monks when he was in the deserted church one evening, though they wore different coloured robes. The ghosts then walked through him and then he saw their backs. A voice told him that there was a monastery nearby in the 15th Century and the monks had resided there, ‘This is our past, this is our future’.

The monks then genuflected to the altar and vanished, once a human voice spoke and a light was turned on. Alas, when his photographer arrived, he could see nothing, but two other witnesses thought they saw a single ghost. An organist later recorded feeling an icy chill whilst practicing in the church one night.

Sceptics have pointed out that the church is relatively modern and has never had any connection with monks either alive or dead. A later vicar noted that he only believed in one ghost and that was the Holy Ghost.

Dr Oates is due to give a talk on local hauntings. It will be held at Ealing Central Library on 26 September. Contact the library for details or visit www.ccslibraries.com/libraries/ealing-libraries