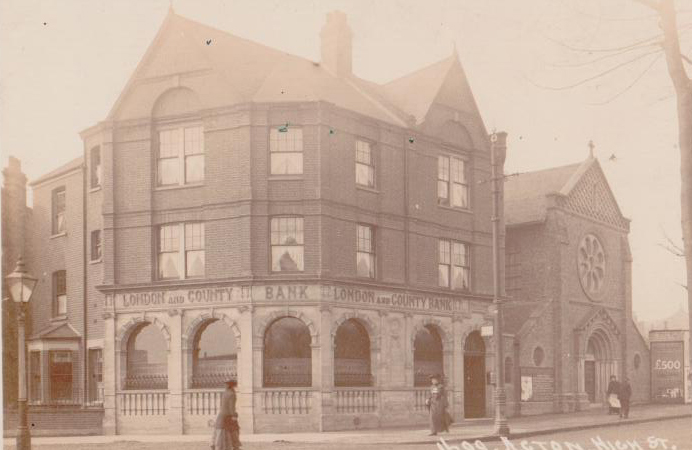 Week 43. Cashing a cheque at a bank in Acton (pictured) brought a bit of relief to a week tarnished by financial worries and a flood of bills. Violence, riots and sinking ships in the news do nothing to cheer Goodlet. See past weeks, and an introduction, in the history section.

Up earlier this morning and after lunch went over to Merchant Taylors to watch the St. Paul’s match. A very good match it was too, with plenty of mixed play and interesting tactics. St. P. won by a converted try, 5pts, to a penalty goal, 3pts.

Buzz and I had tea at the School and pursued a leisurely way home. Have spent a quiet evening at home.

Very little news, which is quite as well. Have been reading an interesting book edited from the diaries of Lady Hardy (Admiral Sir T. Hardy, R.N.); what a wonder life, to die at 90 after moving in all the circles that count during some of the most wonderful years the world has ever known.
The Mater’s cough is still troublesome I fear, but she really looks brighter.

I believe that it is today at Newport that Tim Whitty and Miss Colbourne are, or rather were, married.

Breakfast in bed and up to lunch. Busy during afternoon and then Kidd and Joan and the little girls came to tea. I’m sorry to notice Kidd seems a bit stiff still after the yachting incidents last Thursday night.

I saw them home at 6.15 and did some shopping for the Mater. Home at seven to find that Mrs Stanley had arrived. Pleasant evening, only marred by news of fresh violence in Palestine. Damn the place. To Horn Lane as usual with Stanley, whose cold is not yet better, I fear.

The Mater’s cold is getting on well, but the Pater has had a bad day with his.

I see an old gentleman, a courtier at Rome called Duke d’Olmo is 105 years old and has been in court circles in Rome since before Italy was a kingdom. What a wonderful spell of history to live through.

Up at lunch time as usual and then fairly busy until 6, when I went round to the Aunts’. Busy again after dinner and shall, I really believe, be in bed tonight in quite good time.

The Pater’s cold still seems to be very bad, but the Mater’s is abating, TG. Really what things are coming to here I can’t think. Bills pour in and nothing, absolutely nothing, happens in the way of business. Every issue had completely petered out and every prospect seems gone, and we just go on like automatons. It is a nightmare and try how I will I can think of no solution.

News is not too good. Very bad riots on Bombay, with a heavy casualty list, and in Spain the Rebels sweeping towards Madrid. I regret to see that the famous 300 odd years old Fountain Dock at Bermondsey, in which the Mayflower once refitted, was closed today, to be filled in and built over. O tempora o mores.

Up at lunchtime as usual, feeling much less tired than usual. Busy during afternoon and after dinner tonight on various routine jobs.

Listened tonight to the opening recital of the big new BBC organ and certainly enjoyed it very much.

Things here seem worse than ever, and I noticed a heavy batch of bills in tonight. What an existence.

I see that the old Italian duke I mentioned yesterday has died; this is a great pity.

Got to bed in very good time last night and was up dressed for lunch today. In the afternoon made a start on clearing up the back garden (it is a perfect wilderness) and burned about a ¼ ton of rubbish in a big bonfire, a job in which the Boys assisted with joy when they came in. So, too, did Thomasina; indeed, we had great difficulty in preventing her from casting the garden rakes, trowels, etc. into the blaze. Took Joan, her and Annabelle home at 5.40.

After dinner listened in to the BBC Nelson broadcast, of which I thought very little. Later went out for a stroll and saw the 10.10 ex Paddington Mail go down. I have not seen her for ages. And so to bed, fairly early again.

The international situation over Spain is getting very ugly indeed and as a further trouble Italy has just made the most impudent offer that she will join a new Locarno if we will cede the influence in the Mediterranean to her.

Up at lunch time and then down to the bank. Where the cheque was cashed without trouble. TG. Wandered along to Charing Cross station and had a look at the wreaths on Nelson’s monument. Incidentally, saw a rather nice motor-sailer at Westminster Pier, the Cairngorm. Home at 5 and after tea down to Ealing shopping.

Mr Stanley to dinner and afterwards in came D., JD and EH. We sailed two very fine matches; Kidd and I won the first and Mr Stanley the second. To Horn Lane as usual.

The news today is mixed. The Spanish Rebels have taken Navalcarnero, which is bad, as it is the key to Madrid; and another bad thing is that that blighter Count Ciano is in Berlin conferring with the Germans.

It seems to me also that Sir. S. Hoare is willing to oblige the Italians in the matter of the Mediterranean. Damn him. Finally, I understand that the Pater’s Egyptian negotiations have broken down again. What a life.

Upset the cup of scalding tea which Fuzz must have left in my hand this morning all over myself, so what with the pain and discomfort I did not lie long in bed, but was up reasonably early.

Did quite a spot of work in the garden in the afternoon and after tea took Joan and the little girls home. Met Kidd, who seemed quite cheerful after last night. Went down to Ealing late tonight to post letters and got thoroughly soaked in the rain.

Not very much news apart from the increasing gravity of the international situation.

Yesterday the Girl Pat affair had its conclusion, when the two Osbornes were deservedly sentenced to 18 and 15 months’ imprisonment for ship stealing.

Today Lord Nuffield (Morris) has published the details of his difference with the Air Ministry, and it would seem to expose very nicely the greedy machinations of how our Tory gang keep the plums in the names of their commercial friends.