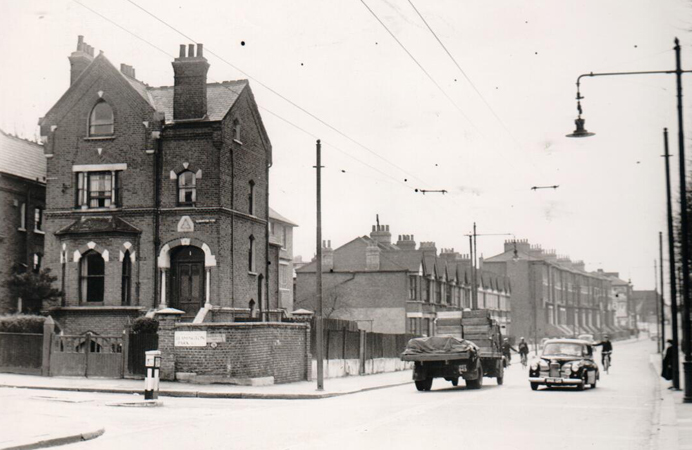 Week 24 has a recurring phrase, which pops up regularly in Goodlet’s world: ‘Walked to Horn Lane as usual’ (pictured). It appears to be his way of clearing his mind and getting some fresh air in troubled moments. The family’s financial troubles weigh heavily this week. You can read all previous weeks of this serialisation in our history section.

Rose for lunch, to find things much as usual.

Put in some routine work in the afternoon, and then started to do some gardening. Ye gods, and the place needs it too. After tea went out and called at 15 where, I’m glad to say, I found them all every well and progressing splendidly.

Called also on the Aunts and drank a cup of tea with them. Home to find the Doc. here for dinner, over which we all lingered discussing the international situation, which is very curious;  we could not tell how any country stands regarding (any) other, and I don’t believe the various authorities know themselves. Another curious thing is the complete silence of and about that blighter Sir S. Hoare. I would like to know what he’s up to.

The news from Palestine is very bad and the trouble seems to be getting worse.

I regret to see that death of Sir John Foster Frazer, the famous journalist and traveller.

Rose for lunch and put in a fairly busy afternoon on routine work. After tea strolled round to the Aunts’, meeting Eddie Baden en route.

After dinner put in an hour’s work on the garden with the Boys and the place begins faintly to look respectable once more. Hope to do a bit to the Rocket this evening. I hear that Joan and the youngsters are all over here this morning and looked much better.

Really, the position here is weird. No money from Paris; Adams rang up and just told the Pater a lot of lies. And, as for any prospect of anything happening, there just isn’t. Lord alone knows what’s to be done.

I see that that awful man Sir S. Hoare duly kissed hands today on his admiralty appointment, so I suppose the blighter is well and truly in the saddle and ready to ruin our naval prestige for his Italian friends.

Had a letter from Daniel yesterday.

Spent all last night until 6 a.m. working on the Rocket, and so slept like a log until lunch time. Found the Pater had gone up to Town on the track of some business and so the Mater and I had lunch together.

Busy on routine work all afternoon and then after dinner set to work burning rubbish in the garden. Made a grand clearance and had the bonfire going for over two hours. How I love the smell of wood smoke on the evening air.

Afterwards wrote the Electric Light Co. and walked down to Ealing to deliver it. Sent them £3 10s. Hope it does some good. Still not a word of capital, or from Adams or that bounder Beau.

The Girl Pat, the runaway trawler, has been sighted near S. America now. Today the Queen Mary returned to Southampton from her maiden voyage.

Up for breakfast this morning, as the Mater had to leave at 12 to go with the Boys to the prizegiving at M.T.s. Incidentally, they arrived home at 7.30, having had a very successful and pleasant time.

Busy with lunch and tea for the Pater and self, and also shopping, getting my hair cut while on the job. Mr Stanley came to dinner, and afterward Kidd, J.D. and E.H. We sailed two races, of which Mr Stanley won one and E.H. the other. Walked to Horn Lane as usual.

Tonight I had a very insolent and peremptory note from the Electric Company, threatening to cut off in 48 hours unless paid in full. What humiliations and dangers does poverty bring one.

The sensation of the day is of course the resignation from the House of Commons of Mr J.H. Thomas and Sir Alfred Batt. Both made very good speeches and I have the feeling that the refusal to try them is very unfair, as they must this lie under this stigma without redress.

The Mater brought me breakfast in bed and I was up and down to the bank by 11.40 to pay in a cheque the Pater had got. I paid it in before 12, so I only hope to God the bank have paid the electric one.

Back to Ealing, where I paid the papers and escorted the babies and Joan over to No. 15. After lunch went to the Vale and paid the interest on the machine and, after calling back here for tea, went down to the Library and to the Aunts’.

On returning for dinner found the dairy representative had been here and made himself unpleasant. Truly, what a life of shame and humiliation. One somehow feels degraded and unclean.

Had a heavy correspondence after dinner and was obliged to go to Acton to post it. Fuzz has procured himself a kitten.

Noticed in the Times today a job in the BBC. Shall have a try for it.

The news today is still all about Mr Thomas’ really dignified exit yesterday from the Commons.

Went to bed last night in the uneasy fear of a troublous day today but, strange to say, fell asleep at once and did not wake until lunch time, when I found everything normal. The Pater spent the morning at Cannon Snell’s son’s factory where, he tells men, he saw some remarkable magnets.

Kidd, Joan and the little girls were here for tea and I also visited them this evening after dinner. Went to Woolworths and the Library after tea. Have spent most of the evening, when I ought to have been working on the Rocket, reading the Crown Prince’s book I seek the truth. A very competent work.

At 12.15 am went in to wish the Mater Many Happy returns of the day, as it is her birthday tomorrow, or rather today.

Palestine is still in a very grave condition.

It has been a quiet and busy day, but an extremely pleasant one, and I think the Mater has enjoyed it.

I worked all night on the Rocket and made some substantial progress. Took the Mater and Pater a cup of tea to their room at 8 a.m. and later had breakfast with the Mater. Worked on the Rocket until lunchtime.

In the afternoon the Aunts and Kidd and his family came to tea, and a right happy gathering it was.

Mr Stanley came for dinner, after which we had music. Walked to Horn Lane as usual.