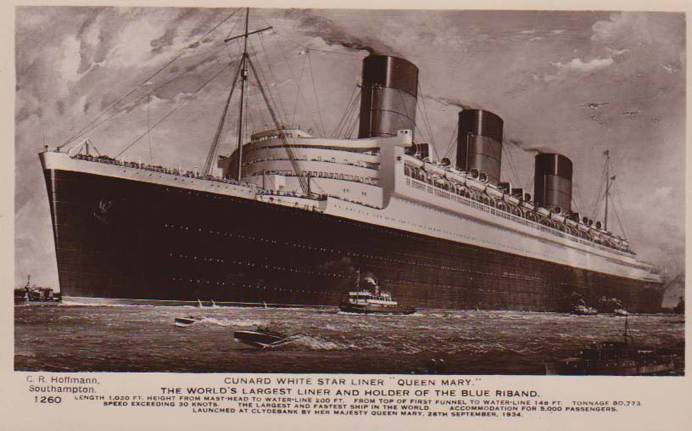 Week 23 of our serialisation of Alexander Goodlet’s diaries begins with a bad day and gets worse with money worries and the fear of the family’s electricity supply being cut off. To add insult to injury, his favourite ship the Queen Mary even failed to reach New York in record time. You can find all past weeks in our history section.

This has been rather a beastly day. Was awakened by Kidd’s coming over to ask the Mater to go over and give them a hand with Thomasina. It appears she had a very bad night, with sickness and cramp; and owing to the Doctor’s being a little unhelpful, as I suspect, both Kidd and Joan became rather overwrought. Poor youngsters, I can imagine their feelings.

The Mater rang Ine and got some good advice from Leonard, and accompanied Kidd home. I called there twice in the afternoon, going also to the Aunts to keep them posted, and taking the Mater home at 7.

The Pater returned for dinner looking better for his week-end. Afterward I again called at 15, where I found the Doctor had been and seemed better pleased. K. and J. too seemed better. Went on to the Aunts’ with the good news.

I fear that the youngsters have had a poor week end and poor old Buzz has been disappointed of my model making.

The Queen Mary docked in New York today, having just failed of the record owing to fog.

After a thoroughly beastly day yesterday today has been an improvement. The Mater woke me with the good news that Thomasina had had a fairly good night. She had sent the charwoman over first thing this morning to get the news.

Kidd came round at lunch on his way to the office and confirmed the good progress. He looks rather washed out, poor chap.

Was down to the bank to pay in Leonard’s cheque for the Boys’ school and then out to M.T.s, where Buzz had invited me to to attend the O.T.C. Annual Inspection. Met Fuzz and duly watched the show, which I enjoyed as much as ever, although it was somewhat marred by heavy rain.

Tonight posted off letters to Jeanette and J.M., and walking back from Ealing found it dreadfully cold.

Today’s sensation is the preliminary announcement of the Budget Tribunal, which in plain language bluntly asserts that Mr Thomas divulged the secret. This is a terrible scandal and a tragedy.

Another bloody day. Rose for breakfast tired and terribly cold to learn that there is a complete breakdown in the Paris negotiations and apparently not the slightest hope of anything being achieved at all. God alone knows what’s to be done worth this mess now, or where we are to get any money to carry on. To come back to this ghastly impasse after all these weary horrible years is just indescribable; it’s unspeakable.

The Mater went round to Joan’s for teas and found Thomasina progressing well. I went to Twyford Bridge for an hour before dinner and looked into old 48 Birch Grove as I passed.

After dinner called on Kidd (it is the 3rd anniversary of their wedding day) and found Joan had gone to bed ill, a result, no doubt, of recent events.

The country has been profoundly stirred by reading…(the) Tribunal Report and there is a good deal of sympathy still for J.H.T.

Today’s news is the arrival in London of the Emperor of Abyssinia, Haile Selassie.

Really, this is the devil of a week. This morning a neighbour of Joan’s rang up the Mater to say that Joan was ill, and would the Mater go over. The Mater did so, and so did the Aunts, to find that she has the same trouble as Thomasina; evidently it is infectious. I hope to heaven Annabelle doesn’t take it.

The Pater and I had lunch and he told me something of the business situation which, in fact, is just chaos and leads nowhere. A thorough washout. Taking courage, or rather impudence, in both hands I went down to the bank and drew out £4 10s. It will help over the weekend, but Lord knows what’s to be done about the electricity account; the blighters threaten to cut off tomorrow.

Did the routine work and went over twice to Joan’s, whence Buzz escorted the Mater home at 7.30. Mr Stanley to dinner and afterwards, he, J.D., L.H. and I sailed two delightful matches, Stanley and I each winning one. To Horn Lane as usual.

A very unpleasant day on the whole. Up to breakfast, after which the Mater had to go over to Joan’s and I was left in charge. Spent a rather uneasy day expecting the man to come and cut off the electric light. However, he didn’t, and I went out with an easier mind at 6.30. Visited Joan’s and found all round improvement, and then went into Ealing shopping.

After dinner, wrote Daniel, and also a letter to the electric people, which can’t do any harm and may do some good. Had a hectic journey to Ealing to catch the post.

There is a monstrous suggestion that Sir S. Hoare is to be the new First Lord (of the Admiralty) and that he has “insisted”, if you please, that the Fleet must be withdrawn from the Mediterranean to conciliate Mussolini. Baldwin will be well advised to drop him once and for all.

Did not get to bed until 6 a.m. and when I did so intended to have read until breakfast time and then risen; but must have instantly fallen asleep and certainly slept like a log until lunch.

Messed about in the afternoon and after tea went to the Library and called on the Aunts. After dinner took a stroll up Twyford Bridge and have just messed around ever since, completely wasting a Saturday night and accomplished nothing.

Heaven has been good and the electric light people have given no sign, Curiously enough, they haven’t even answered my letter. Kidd was over and I gather that all are well at The Common.

Well, the incredible sinister rumour has become a fact, and Baldwin has appointed Sir S. Hoare to the Admiralty. In my opinion this is one of the greatest humiliations ever put upon the honour and wishes of the British People. The man is a political huckster.

Again 6 am before I got to bed, and it’s not as if I had done anything worthwhile in the time either. Rose at lunch time and worked in various jobs till tea. Went round with the Mater to Kidd’s and found them all going on well. After dinner did some gardening and then strolled up to Hanger Lane Bridge, where curiously enough I met J.D.

Very little news, save unfortunately that trouble seems to be getting worse instead of better in Palestine. Wish J.M. was safe home out of it.

Adams rung up the Pater from Paris tonight, and it seems there is a prospect of something being done; but of course, God knows when.