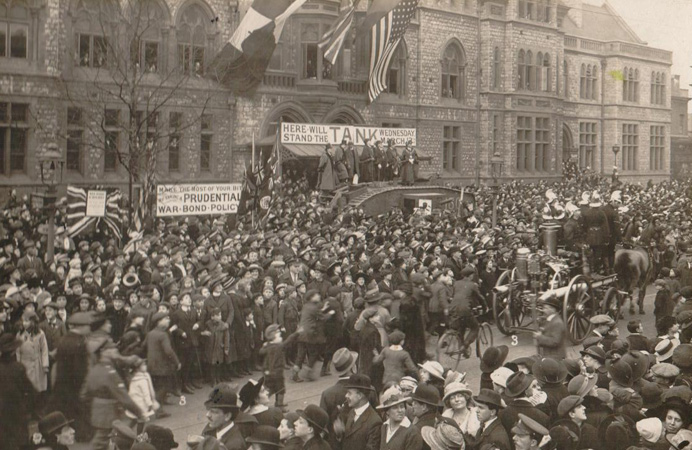 One major invention that came out of the First World War was the armoured vehicles armed with powerful guns, known as tanks. One prototype for such was designed in Ealing, writes Dr Jonathan Oates.

The inventor was Alfred Nesfield, who had a small factory in Talbot Road, West Ealing. In 1915 he began making sketches and creating a large working model. He was aided by Alfred Arkell Williams of 19 Regina Road, West Ealing, who was his foreman and engineer.

It was a box like structure, with heavy armour plates and a few holes. These were for observation and for rifles and machine guns to be fired from. Heavy gun/s were not then considered. There was a motor to provide movement on caterpillar tracks, and lighting. Nesfield was proud of his invention, but the design was not taken up by the War Office when making the first tanks for use in 1916.

To help raise money for the war effort, a tank was driven through Ealing and Hanwell and parked outside Ealing Town Hall on 13 March 1918 (see picture at top of page). About 10,000 people bought war bonds and savings certificates, totalling nearly a quarter of a million pounds. There had been a major parade with marching bands, leaflets were scattered by an aeroplane and this was the greatest number of people seen together in Ealing since the Jubilee celebrations of 1897.

After the war, a tank was presented to Ealing Council as a war souvenir, as occurred elsewhere. At first it was suggested that it be placed on Ealing Green, near to the main war memorial. It ended up in Dean Gardens in 1920, so rather nearer to Nesfield’s factory. It was erected on a specially built base. However, in 1928 there were growing calls for it to be removed and sold as scrap metal. These were defeated but in 1932 they resurfaced.

There were two main reasons why it should go. Firstly it was an eyesore, an ugly mass of old metal’ which was presumably rusting away. Secondly it was a reminder of war and ex-servicemen passing by would be perpetually reminded of their ghastly experiences – those who had lost loved ones in the war would not want to remember it. A councillor remarked: “The tank was the most diabolical weapon ever invented for destroying mankind.”

Yet others wanted to keep it. Some thought it was a reminder of the need to prevent future war. Others said it was a useful landmark in Ealing and businesses labelled themselves ‘opposite the tank’. Mr Nesfield wrote in to argue: “I feel that instead of throwing away the only tank in the town of its origin, it should be an object of pride that such a machine was produced in Ealing.”

However, the tank was scrapped at the end of 1932. The tank on display did not much resemble that invented by Nesfield, but it did form a link with an invention that in part originated in Ealing.